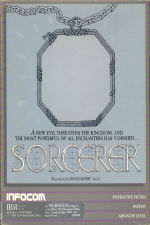 Spellbreaker is a classic text adventure game by Infocom, and the second in the Enchanter Trilogy, which is set in the same universe as Zork. This comes after the previous entry in the trilogy, Enchanter. You are now a full member of the Circle, but your leader Belboz has been kidnapped and you must save him. The story continues with Spellbreaker.

Just wait at the start of the game and your dream will end. Frotz your spell book, get up, and go west. Read the note here, then go south twice to reach the lobby and west into the store room. Get the ochre vial and the matchbook. Read the matchbook. Open the vial and drink the potion (which prevents hunger and thirst). You can now drop the vial. Return east and open the receptacle, then put the matchbook in it.

Next go north twice and west into Belboz's quarters - listen to the bird while in here. Move the tapestry and take the key, then examine the desk. Open the drawer and take the journal. Unlock it with the key, then read it and remember today's code. Walk east, south and west to Helistar's quarters. Take the Gaspar scroll and Gnusto it, then go east and south to return to the lobby.

The doorbell should have chimed by now, so open the receptacle and take the orange vial. Go east into the library and take and gnusto the scroll here. Return west and go down into the cellar. Press the 5 buttons on the trunk as indicated by today's code and the infotater that came with the game - the trunk will open. Get the scroll, then Aimfiz Belboz.

Immediately go northeast, then climb down twice and continue south and west to a chasm. Learn Izyuk twice, then cast it on yourself once. Now go west twice to cross the chasm and continue north. Take a coin then go back south. Izyuk yourself again, then go east 3 times, north and up twice.

Head east and northeast to a river bank. Learn Pulver, then Pulver the river. Go east and northeast into a cave, then get the Fweep scroll and Gnusto it. Also get the bat guano before going down, southwest and up. Learn Izyuk again, then go west twice before casting it on yourself and going northeast and southeast. You are probably sleepy now, so sleep here (ignore any dreams you might have).

Go east and lower the flag, then search it and take the aqua vial. Go east again and look in the cannon to see what appears to be a pile of scrolls. Drop the bat guano in the cannon, then take the Yonk scroll that remains. Return west twice, learn Izyuk twice, and Izyuk yourself. Go northwest and southwest, then Izyuk yourself again before going east twice, down twice, and east again. Wake the gnome and give him your coin, then go east through the gate.

Continue east once more, then go north twice. Learn Gaspar and Fweep, then Gaspar yourself. Drop all, enter the maze to the east, and Fweep yourself. Now go north, east, south twice, west, down, east twice, north twice, up twice, south and east. As soon as you become human again (you may need to wait), pick up the Swanzo scroll - the maze will suddenly change. Drop the scroll down the hole, then go west twice, south and east. You will fall and die, but your Gaspar spell will save you. Pick up everything and head south twice and east. Get the Swanzo scroll and Gnusto it, then sleep again.

Yonk Malyon, then Gnusto Malyon, learn Malyon, and Malyon the dragon. Now head south. Open the orange vial, Frotz yourself, and head east. Drink the orange potion and drop the vial - your twin will tell you a combination that you should remember. Give your spell book to your twin, who will go down the lower chute. Head east and set the dial to the combination your twin told you. Open the door and go east.

Drop everything and then take the rope before climbing up. Head southwest and tie the rope to the timber, then continue northwest and west. Put the beam across the chute, drop the rope down the chute, and climb down - if everything goes well you will end up in a slanted room. Take the Golmac scroll, and Golmac yourself to go back in time. Open the lamp and get the Vardik scroll, then go east to meet your twin again (actually your younger self). Tell your twin the combination from before, and you will receive the spell book. Go down to finally find some fresh air. Wait for your spells to wear off, then sleep.

Learn Meef twice and Swanzo once, then drop the spell book and go east into the lagoon. Dive down and Meef the spenseweeds to find a crate. Take the crate and return up and west, then drop the crate and open it. Take the can of grue repellent, then walk northeast and north. Meef the vines and Vardik yourself, then spray the repellent on yourself before going west twice. Open the white door to find Belboz's hideout. Swanzo Belboz.