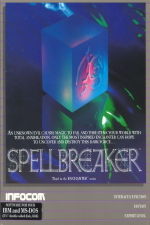 Spellbreaker is a classic text adventure game by Infocom, and the final in the Enchanter Trilogy, which is set in the same universe as Zork. This comes after the previous entry in the trilogy, Sorcerer. You are now tasked with working out why the very foundations of magic appear to be failing.

Note: You will notice at various times that spells don't work for one reason or another - if this happens, just learn the spell and cast it again. This happens more often when you are tired, so don't be afraid to sleep.

Wait at the beginning until everyone is turned into amphibians. Head south and pick up the bread, then go south again. Learn LESOCH, then cast LESOCH and the orange cloud will dissipate. Take the cube. Write "1" on the cube, then learn BLORPLE. BLORPLE the "1".

FROTZ your burin, then save your game. Go down twice and wait 2 turns. Hopefully the roc will catch you in mid-air and carry you away; if not you are now dead and should restore your game and try again. Keep waiting until you reach the nest. Get the stained scroll, then examine it. GNUSTO CASKLY. Learn BLORPLE, then BLORPLE the "1".

Walk east and south. Now remember the description of the Ruins Room you are in, because you will need the details later on. Take the zipper and open it. Look into the zipper, reach inside it, then look into it again. Take the flimsy scroll and read it to see that it contains the very long GIRGOL spell. Now learn BLORPLE, and BLORPLE the "1".

Go south and take the dirty scroll, then read it. GNUSTO THROCK. Go up and wait until the avalanche begins. Wait once more, then cast GIRGOL. Go up 4 times, then take the coin and examine it. Head west to find a stone hut. Learn CASKLY, then CASKLY the stone hut and take the cube. Go east and put the coin, bread and knife in the zipper. Write "2" on the cube, then learn BLORPLE, and BLORPLE the "2".

Go south and pull the weed twice to free it from the ground. Learn BLORPLE and BLORPLE the "1".

Head west and north to find a sneezing ogre. Learn YOMIN, then YOMIN to ogre to learn it has hay fever. Plant the weed, then learn THROCK and THROCK the weed. Go down and pick up the dusty scroll and the gold box. Go up and south, before the ogre has a chance to recover. Read the dusty scroll, then GNUSTO ESPNIS. Open the box and take the cube. Put the box in the zipper. Write "3" on the cube, then learn BLORPLE and BLORPLE the "3".

Take the bread from the zipper. Learn BLORPLE, then drop all except the bread. Go south, and you will fall into the ocean. Drop the bread (this will distract the grouper). Get the cube and then the bottle. BLORPLE the "3".

Open the bottle and look inside it. Take the damp scroll and read it. Pick up everything, then GNUSTO LISKON. Walk north. Learn LISKON, then LISKON yourself. FROTZ the bottle. Learn BLORPLE, then drop all except the bottle and the "3" cube. Enter the outflow pipe. Go west and take the cube, then go west and climb out of the pipe. BLORPLE the "3".

Head north and take all, then put the bottle in the zipper. Write "4" on the cube. Learn BLORPLE and BLORPLE the "1".

Go east and then north. Learn LISKON, then LISKON the snake. Go north twice to reach a temple. Learn MALYON and ESPNIS. MALYON the idol, then wait, then ESPNIS the idol. Wait again, then climb the idol and look into its mouth - take the cube. Climb down. Write "5" on the cube, then learn BLORPLE and BLORPLE the "5".

Learn TINSOT 3 times in a row. Pull all in zipper, then take the burin and close the zipper. Go north, then REZROV the door. TINSOT the channel twice, and the water level will begin to rise. Wait three times and it will be completely full. TINSOT the water, then climb on to the ice floe. Go up into the dungeon above, and take the cube. Open the zipper, get your book, and write "6" on the cube.

Walk west and learn TINSOT, then TINSOT the fragment and pick it up. Put all in the zipper except your book. Learn BLORPLE, then take the "4" cube and BLORPLE the "4".

Go south and try to sit on the green rock, but it won't let you. Take the fragment from the zipper and give it to the green rock, then sit on it. Look, and you will see a description of the lines radiating from your direction. This part of the game is somewhat random: you need to make a map of the lines and trap the brown rock so that you end up moving to the same position. To get the green rock to move, just say "rock, west" and then note the possible moves and where the brown rock has moved. The best way to start appears to be going west, northeast and south. Once you end up on the same spot as the brown rock, jump on the brown rock. Get the cube. Write "10" on the cube, then learn BLORPLE and BLORPLE the "10".

Head north and take the box. Examine the box. Put "10" in the box, and you will see that the figure on the box changes. Take the "10" again, and throw the box at the outcropping. Learn BLORPLE, then BLORPLE the "10".

Go up to reach the outcropping, then pick up the box and the cube. Write "12" on the cube. Put everything in the zipper, then take the book and the "7" cube. Learn BLORPLE, then BLORPLE the "7".

Go south to meet Belboz. Ask Belboz about yourself, then you need to answer a question from the following list:

Belboz will give you a wrought iron key. Now ask him about the cube, and the shadowy figure. Take the "9" cube, then learn BLORPLE and BLORPLE the "9".

Walk east and REZROV the door. Put all except the book into the zipper, then save your game, because you can't save in the next section. Go north. There are 12 "x" cubes in this room, and you need to use the JINDAK spell to determine which is the most powerful - the pile that contains the most powerful cube will glow brightest when you cast this spell. Learn JINDAK 3 times, and learn BLORPLE.

Start by picking up x1, x2, x7 and x8. Cast JINDAK. If one of the two piles glows more brightly than the other, you know that pile contains the most powerful cube; if not, you are holding it. Now rearrange the piles to narrow it down to two possibilities and cast JINDAK again - note that you must have 4 cubes in each pile on the ground and 4 cubes in your inventory for the spell to work correctly. You now have only two cubes to consider; make sure one is in each pile on the ground, then cast JINDAK a third time. Now pick up the powerful cube; an alarm will be going by now. BLORPLE the powerful cube.

Go east the enter the castle. Wait 3 times, then take the knife. Now wait until the shadowy figure prepares to jump into the hypercube. Cast GIRGOL. Now take whichever cube was last added to the structure. Put the sack in the tesseract.