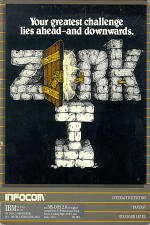 Zork: The Great Underground Empire is the first in a long-running series of adventures set in the Zork universe, created by Infocom. This game is a pure text adventure. You enter through an unassuming white house and discover a dark, forboding and magical underground world, where your goal is to collect 19 treasures. The series continues with Zork 2: The Wizard of Frobozz.

Open the mailbox and read the leaflet - wow, cool intro! Your aim at the start is to get into the house. Head south, then east. Open the window and enter the house. Head west from the kitchen into the living room. Get the lantern, then move the rug to reveal a trap door. Open the trap door, turn on the lantern and go down (the door is barred behind you). Special note - turn off your light sources in this game when you don't need them.

Head south, then east to the Gallery. Take the painting and go north. Read the piece of paper. You need to drop everything unimportant (leaflet and paper) before going up the chimney to get back into the kitchen. Go upstairs and get the knife and rope, then go back down and west into the living room. Open the case and put the painting inside, then drop the knife and get the sword. Now open the trap door and go back down again. Save your game.

Go north into the Troll Room, and "kill troll with sword" (several times if necessary). Now you can drop the sword, and head east, east, southeast, east - you are now in the Dome room. Tie the rope to the railing, then climb down into the Torch room. Go south, then east and take the coffin. Go back west, then south to the Altar. Try going down the hole to get a hint: "You haven't a prayer". Pray.

Turn off the lantern (to conserve it). Go south, then north (?) to the clearing, then east to Canyon View. Climb down (twice), then go north to the End of the Rainbow. Open the coffin to find a sceptre. Take the sceptre and wave it, then take the pot of gold. Go southwest, up, up, northwest, and west. Go in through the window, then open the bag and take the garlic. Go west into the living room and put the treasure in the case.

The Dam, Hades and a Vampire Bat

Once again, open the trap door, turn on the lantern, and go down. To reach the dam, go north, east, north, northeast, east. Go north to the Lobby and take the matches, then go north/east into the Maintenance Room. Get the wrench and screwdriver, then push the yellow button. Go back to the dam (south, south), turn the bolt with the wrench, then drop the wrench.

Go south and then down into the Loud Room (you may end up running to somewhere near here... good luck!). Go west, southeast, and east to get back to the Dome room. Go down your rope, then turn off your lantern and get the torch. Head south, taking the bell, towards the altar. Get the candles and book from the altar, then go down through the hole. Go down again to the Entrance to Hades. Ring the bell, and you will drop both it and the candles. Get the candles, light a match and light the candles with the match. Read the book to exorcise the demons, then go south, get the skull, and go back north. Go back up to the cave, then north to the mirror room. Put out your candles. Rub the mirror to teleport to another mirror room to the north. Go north, west, north and west into the Squeaky room. Go north into the Bat room (hope you have the garlic!).

Head east into the Shaft room. Put the torch into the basket and light your lantern. Go north, down, east, northeast, southeast, southwest, down (top of ladder), down and south. Get the coal, then go back to the top of the ladder (north, up). From here, go up, north, east, south and north to get back to the Gas room. Go up, then south to the Shaft room. Put the coal and screwdriver in the basket, then lower the basket. Make your way back to the top of the ladder, then go down and west into the Timber room. Drop everything and squeeze through the crack to the west. Get the screwdriver, coal and torch, then head south into the Machine room. Open the lid, put the coal in the machine, close the lid, and turn the switch with the screwdriver. Drop the screwdriver, open the lid and take the diamond. Go north and put the diamond and torch in the basket. Squeeze back to the east and get the skull, lantern and garlic (you can leave everything else here). Head east and up to the top of the ladder, then back through the maze to the Gas room. Pick up the bracelet, then continue up and south to the Shaft room. Get the torch and diamond (after raising the basket), turn off your lantern, and go west. Take the jade and go south, east and south to the Slide room. Go down the slide, then up and you are back in the kitchen. Put your treasure in the case.

Turn on the lantern and go down yet again. Go north, east, north and northeast to Reservoir South. Thanks to your dam work earlier, you can go north and get the trunk of jewels. Go north once more to get the air pump, and one last time to find the crystal trident. Go back to Reservoir South (south, south, south), then head east twice to reach the Dam Base. Inflate the piece of plastic with the air pump. Drop the pump and get inside the boat. "Launch" the boat and wait until you see the buoy. Take it and go east to the beach. Get out of the boat and take the shovel, before heading northeast to the Sandy Cave. Save your game.

Dig until you find the scarab (unless you get buried alive - glad you saved?). Drop the shovel and take the scarab, then go back southwest. Drop the buoy and open it - take the emerald. Continue south twice to Aragain Falls and cross the rainbow. Turn off the lantern and go southwest to the Canyon Bottom. Head back to the house (up, up, northwest, west, west, west) and put your treasures in the case.

A Maze, a Cyclops and a Thief

Go east twice then north twice. Climb up the tree, take the egg, and climb down again. Go back to the living room (south, east, west, west) but don't put the egg in the case. Instead, head down into the cellar (turn on the lantern) and go north into the Troll room. Go west, south, east and up, then take the coins and the skeleton key. From here, go southwest, east, south, and southeast to get to the Cyclops room. Just type "Ulysses" or "Odysseus" to get rid of the cyclops and create a new passage straight into the living room - don't go there yet... Go upstairs to reach the Treasure room - the thief's lair. Give him the egg to keep him distracted for a while. Go down, east, east and put the coins in the case. Get the nasty knife and go back west, west. Save your game.

Go upstairs and kill the thief with the knife. Get all the treasure (including the egg), then go down, northwest, south, west, up, down and northeast to get to the Grating room. Unlock and open the grate, then go up to the clearing. Turn off the lantern. Go south and climb the tree again. Take the canary out of the egg. Wind up the canary, and a songbird will drop a present for you. Climb down and take the bauble, then return to the living room (south, east, west, west). Put all the treasure in the case.

Go down into the cellar for the last time (after lighting the lantern). Go north and then east three times to reach the Loud room. Say "Echo" and you can take the platinum bar. Take it back to the living room (west, west, west, south, up) and put it in the case. Assuming you have all the treasure, you will hear a voice. "Look", then take the map and read it. Return to the mailbox (east, east, south, west). Go southwest to the stone barrow and enter it to end the game.