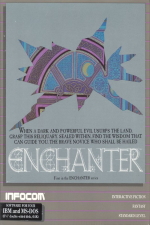 Enchanter is a classic text adventure game by Infocom, and the first in the Enchanter Trilogy, which is set in the same universe as Zork. You are apprentice enchanter, and must save the world from the warlock Krill. The story continues with Sorcerer.

From the start, head northeast then north. Get the jug and the lantern, then open the oven and get the bread. Now head south, northeast, southeast and northeast to find a brook. Get some water (in your jug), then go southwest, southeast, and southwest twice to reach a deserted village. Go south and you will be given a new spell and pushed back to the north. GNUSTO the REZROV spell (so that it gets stored in your spellbook), then learn it. Now head northeast twice and east twice to reach the gate of Krill's castle. REZROV the gate, then head east again.

Learn FROTZ, NITFOL and REZROV. FROTZ the lantern, then head north twice and up. REZROV the egg, then get the scroll. Learn REZROV again, then head down and east 5 times. REZROV the gate, then head north to find a scroll to pick up. KREBF the shredded scroll, then GNUSTO the ZIFMIA spell before heading east to the swamp. NITFOL the frogs, who will tell you to look under the lily pad. Do this to get a new scroll, then GNUSTO the CLEESH spell. Walk west, south, west 5 times and south 4 times. Now head east and south to the dungeon. Open the door and head north into the cell. Examine the wall, then move the loose block and go east into a secret room. Get the scroll and GNUSTO the EXEX spell. Walk west, south and up.

Drop everything here in the south hall, then go east. Move the lighted portrait (you would not have seen this if you had your lantern), then take the candle and scroll - drop the lantern as you have a candle. Go west and pick up everything, then GNUSTO the OZMOO spell. Now head west and up - get into bed and go to sleep.

Go down, then west 3 times and north. Get the box, then continue north and east twice. Drop everything and go east once more to be captured. Ozmoo yourself, then wait. After you are stabbed, go down and west. Cut the rope. Open the box and get the scroll, as well as all your other possessions. GNUSTO the MELBOR, then learn MELBOR, VAXUM and ZIFMIA. Walk west twice, north twice and east to the first mirror room. Wait here for an adventurer to appear, then ZIFMIA him, MELBOR yourself, and VAXUM him.

Walk east 5 times to reach a guarded door. Tell the adventurer to open the door, then go north into the map room. If the adventurer takes either the pencil or the map, make sure you ask him for them - you need both. Drop the dagger, then go south, west and south. Examine the ashes, then the tracks. Reach into the hole to find a new scroll, then GNUSTO the GONDAR spell. Read the dusty book, then walk south 4 times and west twice. Go down twice to reach a translucent room. Sleep here.

Drop the spell book and the jug, then look at the map - you are currently at point B. Walk south, east, northeast and southeast to reach F. Draw a line from F to P. Go southwest twice, then erase the line from B to R, and the line from M to V. Pick up the GUNCHO scroll, then walk northeast and northwest twice. Draw a line from J to B, then go west, drop the pencil, and get the jug and spell book. Learn CLEESH, GONDAR and MELBOR.

Go up twice, north twice and east 6 times to read a winding stair. KULCAD the stairs, then IZYUK yourself and fly east. GONDAR the dragon, then CLEESH the being, and finally GUNCHO Krill to complete the game.