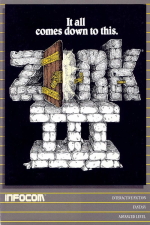 Zork 3: The Dungeon Master is the third in a long-running series of adventures set in the Zork universe, created by Infocom. This game is another pure text adventure, continuing after the previous game, Zork 2: The Wizard of Frobozz. In this game, you awaken after a dream to find yourself within a dungeon and must attempt to escape. The series continues with Zork Zero: The Revenge of Megaboz.

Pick up your lantern, turn it on, and head south four times to reach the Lake Shore. Drop the lantern and jump into the lake. Swim west and go south into the Scenic Vista. Get the torch, and wait for the number on the wall to change to II. Touch the table and you will appear in Room 8 (from Zork II). Take the grue repellent then wait to return to the Scenic Vista. Wait for the number to become III, and touch the table again. While in the Damp Passage, drop the torch, then wait to be zapped back to the vista again. Move north to the Western Shore. Save here.

Jump in the lake and you will drop the repellent. Go down and take all, until you have both the repellent and the amulet. If you get eaten, restore your game. Go back up to the surface, then south to the Southern Shore. Spray the repellent on yourself (to protect yourself from the grue), and go south, south, east. You are now in the Key Room, with some light at last! Get the key, then move the manhole cover and go down. Go north twice to the Water Slide, then down the slide into the Damp Passage where you left the torch earlier. Pick up the torch, then walk west to the Junction. Walk south and southwest to enter the Land of Shadow. Save your game.

The Land of Shadow and the Cliff

Wander around in the Land of Shadow, mapping the area carefully, until a hooded figure appears. The sword will materialise in your hand, and you will have to attack him until he is badly wounded and cannot defend himself. Get his hood and he will run, leaving his cloak behind (which you should also take). Now, using the map you have been making, leave the Shadow Land and get back to the Junction.

Go west twice, pick up the waybread, and climb down the rope. Wait until someone walks along the top of the cliff. Tie the rope to the chest when he asks, and wait again. He will return and help you climb up. Get his staff, then go down twice to reach the Cliff Base. Go south to the Flathead Ocean and wait for a boat to appear. Say "Hello, Sailor" when it arrives and pick up the vial that gets thrown to you. Walk back to the Creepy Crawl (east four times), and wait for the earthquake (unless it happened already). After it happens, go east twice, south twice, and east to the Museum Entrance.

The Royal Museum and Puzzle

Open the east door, then go north into the museum. Look at the gold machine (time machine) and set the dial to 776. Push the machine south then east, into the Jewel Room. Enter the machine and push the button - you are now back in 776 GUE. Wait for the guards to leave, then take the ring, open the door, and go west. Open the north door and go north. Put the ring under the seat, turn the dial to 948, get in, and push the button. Now that you are in the right time again, look under the seat to find the ring. Get out of the machine, then head south twice to the Royal Puzzle Entrance. Save your game.

Go north to the Museum Entrance, then open the east door, go east and get everything from the Jewel Room. Go west twice to the Great Door, then north twice, west twice, and north to the Junction. Now head east, northeast into the Engravings Room. Save your game.

If there isn't an old man sleeping in this room, walk around for a while and come back. When he appears, wake him up and give him the waybread. Open the door he reveals and go north into the Button Room. Go north into the Beam Room, put the sword in the beam, then go back south to the Button Room and push the button. Go north three times, and do the following at the mirror box:

Now go north. Open the vial, and drink the liquid (to become invisible). Now walk north past the Guardians of Zork, until you reach a locked door. Knock on the door and the Dungeon Master will let you in.

Go north, west and north, and the Dungeon Master will follow you. Go north to the Parapet, set the dial to 4, and push the button. Go south, open the cell door, and step inside (south). Tell the Dungeon Master to go to the Parapet, then tell him to turn the dial to 1, and then to push the button. Now unlock the bronze door with the key, open the door, and go south to complete the game.