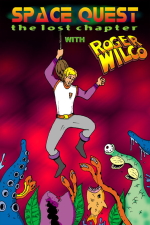 Space Quest: The Lost Chapter is a fan-made entry in the long-running series of comedy sci-fi adventures by Sierra On-Line. There is a seamless transition between the escape pod sequence at the end of Space Quest 2: Vohaul's Revenge and the beginning of this game. The ending ties in with the opening events of Space Quest 3: The Pirates of Pestulon.

Look, then get up and walk in front of the chair. Open the door, then exit the ship. Go south, north and west up on the ledge. Get the flower, then walk east, and south 3 times. Look at the dome and take the code card. Now walk north, west and north twice more, then head up to the blue bush and go west. Go left to the red bush, then look at the mould. Get the mould and eat it.

Head west, south, and west 3 times (following the edge of the lake). Climb the tree, heading up and east. Get the fruit and eat it to discover a worm. Now climb back west and down to the ground. Go east and enter the water.

Dive. Swim west 3 times, then south twice. Swim to the left, towards the tree trunk, then on the next screen, get the line from the middle of the screen, and the jar from the bottom. Now swim south, east, south and east. Search the hole to get a jar cover. Go west, north 3 times and west 5 times. Go to the middle of the screen, then head south. Get the bag from the bottom left of the screen, then return north and east. Surface. Get the nail from near the tree, then bend it. Walk back into the water, and continue walking 5 screens to the east. Fill the jar and walk out of the water. Put the hook on the line, then the worm on the hook. Catch a fish, then quickly put the fish in the jar, and cover the jar.

Swim west then north into the cave. Stop near the entrance and release the puffy fish. Get the tentacle from the hole, then continue west 3 times (take the upward path on the middle screen), south, and east twice. Get the code card from the machine, then return west twice, north and east twice. Go west along the lower path and quickly use the tentacle to confuse the monster. Head east at the base of the screen, then east again. Look at the plaque. Now touch the oracle, then look at it.

Go west twice and quickly use the tentacle again. Head up to the east, then take the lower east passage and continue east twice more. Go down through the hole and head west three times, quickly using the fruit to kill the shark. Swim over and get the piece of paper, then exit the caves by heading east 3 times, up through the hole, west 3 times, east at the top and east again.

Swim west one screen, then start heading south (staying close to the right of the screen). When clams head toward you, head east and continue south. Keep going south, switching screens left and right to avoid the clams. When you reach the southern end, head east under a rock formation. Head to the east from near the bottom of the screen and stop immediately. Save your game now, and regularly throughout the next section.

Try swimming to the east through the tentacles - there is only one point vertically where you can make it through to half way across the screen. Now head one pixel up, one pixel right, two pixels up and swim right to the edge of the screen. Go down and pick up the bone, then head back the same way you came (this is even harder!). Swim 2 screens west, then go north several screens, dodging the clams as you did previously. Head west until you see the crashed ship, then go west once more and surface.

Go north and west through the trees. Walk along the grey path as it curves around the rocks. Climb the mountain when you reach a natural ladder in the stone. When you reach the cave, head left until you are no longer visible, then use the bone to get the stone. Climb back down the ladder and follow the path back to the water. Wade into the water and swim east to the door of the ship.

Open the door with your piece of metal, then enter the ship. Use the panel and go through the open doorway, then head east. Go to the far right corner and grab a rod. Now walk west, south, east and north. Approach the big screen to the right and use the panel. Walk to the edge of the hatch and climb down the ladder.

Save your game, then walk east. Fire your gun at the 2 aliens (repeatedly) and dodge their lasers. Walk east, south and east, then take the lower of the two suits. Walk towards the panel and press the green button so you can take the helmet. Now walk west, north and west twice, then go up in the elevator. Head west, then use the panel and go through the doorway. Save your game, then walk around the wires to collect the magnet and rope. Leave the room to the south, then exit the ship.

Walk south, south, east and use the panel on the right. Walk beneath the ship and press the blue button, then flip the green switch and press the red button. Steer the ship west until you see the crashed ship. Stop moving, then wear the suit and exit your ship. Attach the magnet to the rope, and get the box with the rope. Enter your ship and continue west. Go to the top-right of the screen and use the box.

Head east and use the panel then go through the doorway. Walk east, south, east twice, north and east twice more. Get the outfit that is uncovered, and also take the mask. Walk back to where you entered the city, closing the door behind you by using the panel. Enter your ship again. Press the blue button, flip the green switch and press the red button. Now head east until you return and exit the ship automatically. Walk west, north twice and west again. Use the panel to flood the room, then press the green button on the left and swim back to the tunnels.

Head west, up twice, east, up 4 times, west 3 times, up twice, west twice and up twice. Back in the water, head north 3 times and west 4 times. Surface, then open the door with the metal again and enter the ship. Use the panel and head through the door. Walk east, enter the pod and use the green code card to transport up to the spaceship.

Upon arrival, wear your mask. Head west and enter the elevator, then press four. Walk east, through the door and west. Talk to the bartender, ordering a Tormeenian special. Go and get the drink, before heading east twice. Walk up to the sleeping alien and talk to the Tormeenian. Give him your purple stone in exchange for the clearance card. Walk west and listen to the alien who's talking to the two others. Now head south, west and back into the elevator. Press one.

Walk east, through the door, and west. Look at the bomb. Walk over and help the Vorakian, saying you know about the Frazilator. Now go and help the Tormeenian, telling him you know about the Promak Deviation Test. Give your flower to the Tormeenian to make him leave. Put the wrench in the hatch, then put the fiery frost in there too. Head east and you will be arrested.

Walk over and look out the window. Now read the graffiti, then clean it. You will be set free, and the game is completed.