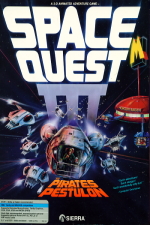 Space Quest 3: The Pirates of Pestulon is the third official game in a long-running series of comedy sci-fi adventures by Sierra On-Line. This continues from the previous game, Space Quest 2: Vohaul's Revenge. The series stars Roger Wilco, space janitor and reluctant/accidental hero. In this game, Roger ends up on a trash pile once his escape pod from the end of the last game is picked up. He then must travel the galaxy, avoiding a collections cyborg that is after him for overdue payments. The series continues with Space Quest 4: Roger Wilco and the Time Rippers.

Start by heading south and east. Stand over to the right so that you are picked up by the garbage elevator and dumped up on a conveyor belt. Stand up and jump. Walk west 3 screens and enter the grabber hanging from the rails. Use this to go left, to the back of the screen, and go east once. Toward the right of this screen, press the claw button to pick up the warp motivator. Keep going east until you loop around to the front of the screen, then press the claw button to drop the motivator in the ship.

Take the grabber back to where you found it, and exit to the middle platform. Walk south and fall into the garbage chute. Grab the generator from the left side of the screen, then go and climb the ladder on the right. Walk north and east twice into a tube, where the rats will steal the generator. Go back west and south, then climb down the ladder near the bottom-left of the screen (you can't actually see this). Climb back up and take the ladder.

Walk north and east twice again, grabbing some wire from the wall. Continue east, and enter the robot head through its eye. Walk to the right of the ship and use the ladder to climb on to it. Enter the hatch to get inside. Put the generator in the compartment, then use the wire to connect it. Sit down and search the seat to find some money. Look at the computer screen, then activate the engines and turn on the radar. Take off, then activate the weapons system. Turn on the rear shields, then fire and you will escape the freighter.

Use your navigation system to set a course for Phleebhut, then activate light speed. Once you are orbiting the planet, activate an automatic landing.

Stand up and exit your ship, then head west twice and north twice. Enter the World-O-Wonders and sell your orium (for 425 buckazoids), so that you can buy the orat-on-a-stick, astrochicken flight hat, and thermoweave underwear. Wear the hat before leaving the shop.

After your encounter with Arnoid, head south, south and east, under the overhang with the pulsating pods (do not walk directly beneath them). Arnoid will approach and be eaten. Walk around to the left and use the orat to get his invisibility belt. Head east to your ship and go inside.

Sit down again and look at the computer screen. Plot a course for Monolith Burger and go there at light speed. You will automatically dock on arrival.

Walk to the west and talk to the cashier. Look at the menu, then order a Monolith Fun Meal. Sit down and eat the food, and you will discover a decoder ring. Stand up and walk over to the arcade game. Successfully complete the game by landing the Astrochicken 10 times and you will see a secret message. Use your decoder ring and decypher the message.

Leave Monolith Burger and board your ship. Set a course for the planet Ortega and head there at lightspeed. Land on the planet.

Stand up, put on the underwear you purchased earlier, then go outside. Walk south, west and south again, hiding behind the rocks until the surveyors leave. Go and look through the telescope to see the moon of Pestulon. Grab a detonator from the box on the right, and also take the pole. Head east twice and north twice into a complex. Walk down the stairs, then head east and climb the massive ladder. Walk close to the edge and drop the detonator.

Head all the way back to your ship, using the pole to vault across the new chasm that blocks your way. Board your ship once more and set a course for Pestulon, heading there at light speed. Land once you arrive at your destination.

Exit your ship and head east. After the first group of guards has exited the building, wear the belt and activate it. Now enter the building, walking straight past the guards and down the stairs. Press the button to get inside.

Walk down until you see a door on the left - go inside and look. Get the overalls and you will discover a trash vaporizer. Exit the closet and continue down until you can go through a door on the right. Head west, using the vaporizer on any full wastebaskets you directly see. Empty the trash on the next screen as well, then take the portrait of the CEO from the wall, make a photocopy, and return it.

Walk down until you find a door on the right with a card slot. Use the keycard, then hold up the photocopy to get inside. Push the button to form a bridge, then use the vaporizer to free the Two Guys. You will be captured and challenged to a duel. Beat Elmo, then you will escape through the hole in the wall.

4 ships will attack you - simply change your shields to rear or front depending on where they attack from, and shoot them with your lasers. Now sit back and watch the ending.