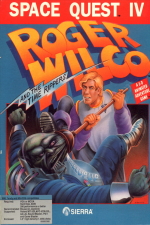 Roger Wilco and the Time Rippers

Space Quest 4: Roger Wilco and the Time Rippers is the fourth official game in a long-running series of comedy sci-fi adventures by Sierra On-Line. This continues from the previous game, Space Quest 3: The Pirates of Pestulon. The series stars Roger Wilco, space janitor and reluctant/accidental hero. In this game, Roger is saved from certain death by a strange man with a hair dryer. He then embarks on a surreal adventure through time, into the future and past, avoiding Vohaul's hencemen and fulfilling his ultimate destiny. The series continues with Space Quest 5: The Next Mutation.

Start by heading east and getting the rope. While in the streets of Xenon, if you hear a security droid coming, hide behind a pillar or somewhere else out of sight. Also avoid the zombies. Return west twice. Look at the wreckage and take the PocketPal from the glove compartment. Now go north and look in the tank. Take the unstable ordinance, then put it back where you found it.

Walk north and hide behind the overhang. Throw your rope on to the footpath, and when the pink bunny steps into the loop, grab it. Look at the bunny and take the power cell from its back, then insert it into the PocketPal. Now head south and west, and pull up the grate to go below ground.

Take the jar from the desk, then pull back the desk blotter to press a button. After the message, open the sewer hatch to the left and go through. Head north slightly, then go west. When the slime appears, scoop some of it up in your jar, then keep moving. Climb the ladder. When the guards have cleared off, get out on to the street and walk straight over to the ship. Climb into the hatch and you will be flown away.

At headquarters, head left and when the time pod appears, climb inside. Answer the copy protection question using your manual. Now note down the code for in the time pod for SQ12 (you will need it later). Enter a random combination of symbols and you will eventually transport out of this time.

Get out of the pod and walk west, then over to the rocks - a pterodactyl will fly overhead. Go back to the east and down the stairs, and you will be carried away. When the quard joins you, search him. Examine the wrapper carefully (note the 3 symbols you can see), then escape out the bottom of the nest. You will be captured by the Latex Babes. After you are tied up and the sea slug attacks, press the red button, then grab an oxygen tank and throw it at the slug. You will then be taken shopping.

Pick up the ATM card from the ground, then head west. Enter the Big and Tall Store and talk to the salesman. Pay for the new suit, then leave the shop, continuing the way you were going. Enter Monolith Burger and work until you earn at least 70 buckazoids. When you are fired, walk back to the entrance of the Galleria and pick up the cigar butt. Go east and use the ATM card with the machine - it will fail because you don't look like a woman. Head south and west to reach Sacks. Talk to the shop assistant and buy the wig and dress, then return to the ATM. Get all the money. Now enter the software store and purchase a hint book. Read through it, noting the 3 symbols for Ulence Flats.

Return to Sacks and put on your old clothes, then head for the arcade. Play Ms AstroChicken for a while and the machine will explode. Now head up and to the right and a time pod will appear. Walk quickly south out of the store without being seen. Now head south, and then east on to the skate-o-rama. Float upwards, then when the police appear, float back down and west out of the area. Head back north and into the arcade, then get in the timepod. Enter the code for Ulence Flats (using the 2 fragments you have found).

Get out of the pod and head south. Go inside the bar and talk to the monochrome guys. Once you are ejected, push over their bikes and you will run and hide. Walk back east and dodge the bike when it it right near you (repeat this as necessary). Go inside and grab the matches from the bar, then go back outside. Head north and get into your pod again. Enter the code for SQ12.

Exit your pod and head east twice. Pour the slime on the lock and enter the tube. Light your cigar with a match to show the laser beams, then use the control panel. Enter 156, 024 and 108 to align the beams correctly (if you enter other numbers first, these codes won't work and you will have to work out the pattern). Walk through to the next area. Look at one of the control panels and note the shape of the plug. Now return to your time pod and head to SQ10.

Head east and enter the electronic store. Buy a PocketPal adapter to fit the plug you have seen, and connect it to the PocketPal. Now return to SQ12.

Go back through the corridor. Look out for droids patrolling the area, and attach the PocketPal to one of the panels. You need to get to the bottom left of the maze. Once there, you will find another panel requiring a code. Look at the SQ4 hint book again and note the 10 digit code. Enter this at the panel, and walk into the green room. Use the interface to flush the droid and then the brain.

Leave this room and head back to the east. Follow the maze up to the top level and into a corridor to the far north. You need to fight Vohaul (just keep aiming at him). When he is frozen, climb down the ladder and get the disk. Insert the disk into the computer. Select beam upload and disk upload, then move the pointer to Roger and select beam download to complete the game.