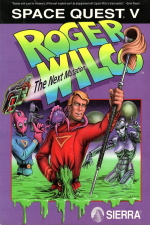 Space Quest 5: The Next Mutation is the fifth official game in a long-running series of comedy sci-fi adventures by Sierra On-Line. This continues from the previous game, Space Quest 4: Roger Wilco and the Time Rippers. The series stars Roger Wilco, space janitor and reluctant/accidental hero. In this game, Roger cheats his way through a Starfleet Aptitude Test, graduating from janitor to captain. During the game he pilots his garbage scow and uncovers a galaxy-wide garbage dumping conspiracy. The series continues with Space Quest 6: Roger Wilco in the Spinal Frontier.

After you get kicked out of the simulator, head north and enter the room on the right. To pass the test, you need to cheat - have a look at the test paper on the left before completing each question to get the right answer. Just make sure the teacher-droid does not see you. Once the test is over, head south and open the bottom door. Grab the scrub-o-matic and the safety cones, before heading south again. Go down the passage to the east and go down in the lift.

Place the cones and the scrub-o-matic on the floor. Use the scrub-o-matic to clean the entire crest (you have a limited amount of time for this). Wait for a cutscene to finish, then head back up in the lift, and go west and south. Look at the board to check your SAT score.

Sit down in your chair once you regain control. Command Flo to hail StarCon, then get Droole to set a course for Gangularis (71552) and go to lite speed. When you are approaching your destination, slow down to regular speed, then when you see the planet, order Droole to activate the RRS. A life-form will be detected in the trash. Stand up and go through the door to the north. Open the east door in the hallway by pressing the button next to it. Spike will run away after detaching from your face. Now look in Cliffy's toolbox and grab the laser torch, hole punch, fuse and antacids. Clean it up, then exit.

Head north and sit down again. Get Droole to plot a course for Peeyu (92767), initially go to lite speed, then slow to regular speed and use the RRS as before. You will receive a secret message at this point. Now set a course for Kiz Urazgubi (20011). When you arrive, you will be confronted by WD40. After the conversation, stand up and head north, then west into engineering. Stand on the platform and command it to beam you down.

Move quickly here, because WD40 is on your trail. Head northwest into a cave, then go east and walk out on to a branch until it breaks. You will float back to shore - when you get there, collect the branch, then head northwest and east again. Crawl through the log and hit the bunch of bananas with your branch, then grab one. Now head west and go through the left cave to reach a waterfall. Go through the left cave here as well. Jump over the gap and climb up to the boulder. When WD40 enters the cave, use the branch on the boulder.

Return to the pool area where you beamed down and look at WD40. Return northwest and hide half way along the log. When she lands on the log, reach up and stick the banana in her exhaust pipe and she will explode. Exit the log to the left and grab her head. Go back down to the pool and talk to Cliffy, who will beam you back to the ship. Walk out of engineering, then go back inside and you will give Cliffy the head, in exchange for a remote control. Beam back down again and use the remote control on yourself.

Step on the pad to get into the ship. Open the access panel on the right, then perform these steps:

Now step on the panel again and you will escape. Back in your ship, Spike will appear again. When you have him, drop him in the specimen container in engineering. Add some antacids while you are there. Head back to your seat and set a course for the Spacebar (69869). When you get close, slow to regular speed, then enter a standard orbit. Go north and west into engineering, get Spike and beam down.

Go and sit down at the table on the left. You will be given a packet of space monkeys and a business card, and then challenged to a game of Battle Cruiser. Win this game without losing any ships for maximum points. Cliffy will get sent to jail, so sit down again and talk to you crew about his escape. Put the space monkeys in your drink, then head east. Click the panel to turn off the force field, then look at the second cell. Use Spike on the bars to set him free, then you will head west and beam out of there. Put Spike back in his container and head for the bridge. Sit down and plot a course for Klorox II (90210). Go there at lite speed, then go down to regular and enter a standard orbit when you arrive.

Press the orange button in your arm rest and get WD40 to scan the planet and scan for ships. Next, command Flo to hail the planet and hail for ships. Fnially, go back to engineering and beam down. Walk down to the buildings and enter the greenhouse. Use the computer, and you will be attacked - dodge the spit until Droole saves you. Talk to the mutant, then pick up the piece of paper and examine it. Use the computer again and enter the code 80869.

Leave the building and head back to where you beamed in. Watch the tumbleweed and follow it to the west. Look at the can of soup, noting the coordinates of Genetix Lab. Walk away and use your communicator to get back to the ship. Go to the bridge and sit down, then watch the emergency message from the Goliath. Plot a course for Thrakus (53284) and go at lite speed, then regular speed before going into standard orbit.

Get WD40 to scan the planet, then leave the bridge to the north. Press the red button on the right wall to reveal a lift. Stand on this to get down to the pod bay. Grab the rebreather mask and oxygen tank, then use the console on the right to open the lift. Go inside, then head west to engineering and stand on the transporter. Wear the rebreather mask and you will be beamed down.

Walk to the escape pod and look inside. Take the coat and push the red button to turn off the homing beacon. Head west and you will be attacked by Bea. When you get a chance, give her the coat. Use your communicator, then Bea will throw you a vine - climb up and you will escape. Bea will give you a warp distributor cap, then need medical attention. Press the red button to open the cryofreeze chamber. Pick up Bea and put her inside. Look at the chamber to see the panel, and set it for 10 second cryofreeze, then press start.

Return to the bridge, and order Droole to take evasive action when you come under attack, and go into the asteroid field. Cliffy will float off into space, so get out of the bridge and press the red button to access the lift down to the pod room. From the console, rotate the pod, then get in. In the pod, use your radar display to find the red dot (Cliffy) - when a green box appears on him, activate the claw near your right thumb and collect him. Now use the radar to get back to the green dot and you will automatically return to the ship.

Go back up in the lift (access it using the console again). Go north to the bridge and sit down, then plot a course for the Genetix Lab (with the coordinates from the can of soup earlier). Head there at light speed, then slow to regular and activate a standard orbit when you arrive.

Go back to engineering and beam down. As a fly, go to the edge of the water and a frog will jump out and activate your communicator. Now fly to it and talk to Flo. Fly west, and in through the door lock mechanism (note the pattern here). Go down to the computer screen and access all the information there. Now head back outside and get Cliffy to follow you east and behind the rocks to a dumpster. Fly on to your body and things will get sorted out.

Return to the door lock and use your hole punch on the business card, making an X-pattern on the left of the card to match the slot. Use this to get inside. Head down the stairs and press the big black button, then grab the liquid nitrogen cannisters. Go back outside and get Cliffy to beam you up.

Back on your ship, Spike starts to get agitated. Order Cliffy to reverse the polarity of the transporter. Look at the cryochamber and defrost Bea for 10 seconds, then pick her up and place her on the transporter pad. You will automatically put her back in the cryo. Now talk to WD40 about your plan, before going back to the bridge.

Order Droole to lay a course for Gingivitis (81100). Go at lite speed, then slow to regular when you are near. Use the green button to contact Cliffy, and get him to cloak the ship. Now head back to engineering. Cliffy will show you a schematic of the Goliath - click on each area to find the one with the lowest Pukoid activity.

Head out of engineering and press the red button, then get on the lift down to the pod bay. Enter the pod. When you approach the Goliath, head for the area just right of the engines. Open the hatch by pressing the button to the right, then use your laser torch to cut through the hull, and go inside. Wait for a guard to enter and leave again, then approach the central computer. Replace the warp distributor cap. Wait for the guard to come and go again, then go through the door, to the corridor. Lift the grating and drop into the passage beneath.

WD40 will come and save you, and then you will set a trap. When the pukoids are all on the transporter, command Cliffy to activate it. Quirk will escape - when given the option, get Flo to arrange transport back to the Eureka. Run to the bridge and sit down. Command Droole to fire, then activate the RRS. Command Flo to abandon ship, then press the red button on your chair and hit the self-destruct. Go down to engineering and get Bea out of the cryochamber. Stand on the transporter and command it to beam you away, but it will blow a fuse. Leave the room and open the hatch on the right wall (NOT the garbage disposal unit). Remove the middle front fuse and replace it with the one you have. Go back to engineering and get Spike, then stand on the transporter and command it to go.