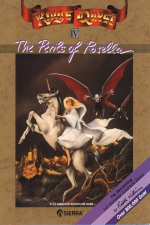 The Perils of Rosella

King's Quest 4: The Perils of Rosella is the fourth in a long-running fantasy adventure game series by Sierra On-Line. This follows after the previous game, King's Quest 3: To Heir is Human. You play as King Graham's daughter, Rosella, sent on a quest to find the magical fruit from a far-off land that will help to ave the King's life. The series continues with King's Quest 5: Absence Makes the Heart Go Yonder.

Start by heading east. Look out for a robin pulling a worm from the ground around here at some point - when you see it, scare the bird and get the worm. Go east and south to find a pool. Cupid will arrive, and when you approach he will fly away. Take his bow. Go south 3 times and look under the bridge to discover a golden ball. Return north and throw the ball in the pond. Go over and pick up the frog, then kiss it. The prince will give you his crown, then leave. Pick up your ball again.

Head east to a graveyard, then go south. Open the door, enter the house and clean up. After the dwarves come and go again, clean up a second time. Look at the table and take the pouch, then open it to discover it contains diamonds. Leave the house and head south to find a cave. Walk inside and go to the back of the cave to find the head dwarf. Give him the pouch, but he will let you keep the bag and also give you a lantern. Exit the cave.

Go east to some pine trees - if you don't have the worm yet, wait here to get it as described previously. Head north twice and open the door, then go inside. Head to the room on the west and look at the books, then take one. Look at the picture, then look at the wall. Pull the latch and walk through the door. Get the shovel, then leave the house. Head east to another graveyard, then south to a waterfall.

Enter the water and swim to the waterfall, but the current pushes you back. Get out of the water again and put on the prince's crown. Now as a frog, swim under the falls to reach a cave. Get the board at the entrance then enter the next room. Grab a bone and get out of there before the troll gets you. Now swim back through the falls.

Head south and east, and let yourself be captured by Lolette's goons. You will be thrown in a cell for a while, then asked to bring Lolette a unicorn.

Head west 4 times, then wander through the meadows until you see the unicorn. Keep your distance, and shoot an arrow at the unicorn to make it your friend. Now you need to find a bridle. Head north and talk to the minstrel - give him your book and he will give you his lute (if he is not here, leave the screen and come back until he appears). Go north and find Pan, playing his flute. Play your lute and he will come and listen. Give him the lute in exchange for his flute (again, if he is not here, leave and come back).

Now go west, then continue west along the pier to find a fisherman. Try to talk to him, but he will ignore you, and eventually stand up and walk back east to his house. Follow him, open the door and go inside. Talk to him several times, then give him the pouch of diamonds - he will give you his fishing pole.

Leave the house and go west to the end of the pier. Bait the pole with the worm, then fish - you will catch a fish. Save your game, then jump off the pier and swim west twice to reach Genesta's island. Head south twice and west, and you should find a peacock feather you can take - if not, it is around here somewhere. Save your game, then swim out into the water. If a shark gets you, restore the game. If a whale comes, let it swallow you.

Once in the whale, swim over to the bottle. Get it, open it and read the note. Now swim over to the far right side of the tongue, and climb diagonally up and left. If you don't have the right spot, you will fall - just try again until you stand up automatically. At this point, keep going up and left, and tickle the whale with the feather. If you are not in the right spot, just move a little and try again. You will be sneezed out into the water.

Swim north to reach an island. Throw the fish to the pelican and it will leave a whistle that you can pick up. Walk around so you are inside the boat wreck on the right of the island, then look at the ground to find a golden bridle. Now blow the whistle, walk into the water and ride the dolphin.

Go back to the unicorn (most likely east and north twice). Put the bridle on the unicorn, then ride it and you will go back to Lolette. She will now request the ogre's magic hen.

Walk west twice then south to reach the ogre's house. If you see someone outside, leave and come back again. Open the door and go inside, and quickly throw the bone to the dog. Go upstairs. Get the axe, then go back downstairs. Do not enter the room to the right, as the ogre's wife is now home. Open the door beneath the stairs and enter the small room. Look around to notice a keyhole. Wait for the ogre to come home, then look through the keyhole and wait for him to fall asleep. Open the door, then walk over and get the hen. Open the front door of the house and the ogre will wake up.

Once outside, head east and use your axe to scare the trees. Head north, then east twice and Lolotte's goons will capture you again. Now she wants Pandora's Box.

Head west, south and east to a skull cave. Enter the cave. Wait for one of the witches to get close to you, then dodge around behind the cauldron to the other 2 witches. Take the eye as they pass it between themselves, then leave the cave. Go back inside and they will throw you a black scarab. Get the scarab, then throw the eye and leave.

Walk south 3 times and wear the crown again to get behind the waterfall. Light your lantern, then save your game before going east. If the troll gets you, restore your game. Head south as far as you can, then go east until you see a light in the distance. Go slowly across the screen until the light reveals a chasm. Put the board across the chasm, then walk across. Go north, then east through the hole.

Walk near the edge of the water and jump repeatedly to get across the water. Put the board down and a snake will rise from the grass. Play the flute to mesmerize it, then walk across, get the fruit, and walk back. Get the board, then start jumping back. Night will fall. Go back through the cave. Put the board over the chasm and cross again, then go west, north and west out of the troll's cave. Go back through the waterfall.

Head north and west, then open the door and go inside. You hear a baby crying - go upstairs and through the door on the left, then go west. Look in the crib, but it is empty. Go back out of the house, then walk west. Read the tombstones, and you will find one belonging to a 6 month-old baby (if it isn't here, check the graveyard to the east of the house). Dig with your shovel and you will uncover a silver baby rattle. Go back and put this in the crib and it will stop rocking.

Go back downstairs and when the ghost appears, look at it - it is an old miser. Go back to the graveyard and find a tombstone mentioning a miser. Dig here to find a bag of coins. Return to the house and give the coins to the ghost to get rid of it. Now you hear crying upstairs, so go up and into the right bedroom. Look at the ghost here to see a lonely woman. Head back to the graveyard again and find a tombstone of a woman who lost her love at sea. Dig to find a locket, and give this to the ghost to make her vanish.

Downstairs again, and another guy is pacing around with one leg. Go to the graveyard and find the tombstone of a man who served his country well. Dig to find a medal, which you should return to the ghost. Follow the boy ghost into the right upstairs bedroom. Climb up the ladder, then look at him and climb back down. Go to the graveyard and find one belonging to a boy named Willy. Dig to locate a toy horse. Go and give it to him, climbing up the ladder again. Once he has gone, open the chest and look in it to find a piece of sheet music. Climb down the ladder and go into the west room down the stairs.

Go through the secret door and up the stairs. Sit down in front of the organ and play the sheet music. Look in the secret drawer that appears and take the key, then go back down the stairs and out of the house. Walk east to the crypt and unlock the door with your new key. Open the door and go inside. Get the rope, then climb down - don't worry about the mummy. Get Pandora's Box (don't open it). Climb back up the ladder and leave the crypt. Go south twice and east to get picked up by the goons. Now you will be imprisoned again.

Wait in Edgar's room for a while and he will bring you a rose. Look at the rose and take the key that is attached. Unlock the door and open it, then save your game before heading downstairs. Go east into the dining room, then through the upper doorway and east again to the kitchen. Open the cabinet and get all. Go back to the west again, then through the lower doorway to the east.

Go east again and up the stairs (right to the top). Use the gold key to unlock the door, then open it. Shoot Lolotte with an arrow to kill her. Edgar will come and give you free run of the castle. Go and take the talisman from Lolotte. Go down one flight of stairs and through the doorway to the west. Open the door to get the hen and Pandora's box. Return to the east and down the stairs, then go west and south out of the castle.

Enter the stable to the left and open the gate. Exit the stable and go down the mountain. Go north twice and into the crypt. Climb down and drop the box, then climb up and exit the crypt. Close and lock the door.

Walk west 5 times, then north and west to the end of the pier. Save your game, then swim west twice to Genesta's island. Walk south and west, then open the door and go inside. Climb the stairs to the west, and keep climbing to reach Genesta. Give her the talisman to complete the game.