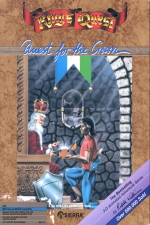 Quest for the Crown

Walk west over the bridge, then open the doors and go north and west. Stand on the lowest step and bow to the king, then talk to him. Head east and south out of the castle, then walk west. Push the rock, then look in the hole and take the dagger. Now walk north and climb the tree. Get the egg from the nest, then climb down and head north twice. Get a walnut, then open it. Head east and get the bowl. Examine the bowl, then read the word within it. Now head north and take some pebbles. Return south twice. Talk to the elf (if he is not here, leave and come back again) and you will receive a ring.

Enter the water and swim east (you need to type "swim"). Go east again and take the 4-leaf clover. Walk south, east twice and south again, then look in the tree stump and get the pouch. Open the pouch, then continue south and east to reach a hut. Go inside. Fill the bowl (just type "fill"), and give it to the woodcutter, then walk over and get the fiddle before leaving.

Head south twice and try to eat the house. Knock on the door - if someone answers, leave and come back. Open the door and go inside. Open the stove, then open the cabinet and take the cheese. Walk into the bedroom and get the note, then read it. Wait for the witch to enter the house, then walk behind her and push her. Leave the house again.

Walk south twice, then east 3 times to reach the garden. Pick a carrot, then head east 4 more times to reach the goat's gate. Open the gate and go inside, then close the gate behind you. Show the carrot to the goat and it will follow you. Open the gate and head north twice, west and north again. Start to cross the bridge, then step back and let the goat take care of the troll. Now cross the bridge and go west. Talk to the gnome, and guess his name correctly ("ifnkovhgroghprm" - which is rumplestiltskin, but swapping a for z, b for y, etc.). Take the beans.

Walk east twice and plant the beans. Climb the beanstalk up into the clouds, and head east twice, south and east twice more. Look in the hole and take the slingshot. Walk north then west, and quickly wear and rub your magic ring (you can shoot the giant with the slingshot instead, but will not get as many points). Wait for the giant to fall asleep, then get the chest. Walk east and enter the cave. Follow the stairs right down to the ground.

Walk west twice, then south to the well. Cut the rope to get the bucket, then lower the rope and climb down the rope into the water. Dive, then swim down and west into a cave. Go back to the east and fill the bucket with water, then return to the cave. Walk to the east stalagmite and throw the water at the dragon. Take the mirror, then go back and fill the bucket again. Head west twice out of the cave. A condor will now fly around the screen - keep jumping until it catches you and carries you away.

Return to the King

Walk west and get a mushroom, then return east and fall into the hole. Head south and west, and give the cheese to the rat. Open the door and play your fiddle. Go south and take the sceptre and shield, then go west. Eat the mushroom, then continue west through the hole. Walk east, south 3 times and east again. Open the door and go north and west. Stand on the lowest step and bow to the king.