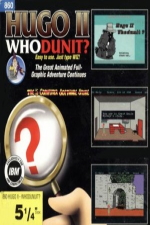 Hugo 2: Whodunit? is the second of a trilogy of mystery 3rd person adventures starring Hugo. This game continues after Hugo's House of Horrors. In this game, you play as Penelope (and later Hugo) and must solve the mystery of Hugo's uncles murder. The series continues with Hugo 3: Jungle of Doom.

Start by walking up the stairs. Go to the door on the right and enter north. Walk to the bookshelf and take the yellow book - you will disappear through the passage. As Penelope, walk to the door on the left and look through the keyhole. When you recover, walk over and get the yellow book. Head west and get the balloon, then head back to the east. Use the phone, then talk to the parrot. Open the desk drawer and take the matches. Get into the dumbwaiter.

Open the cupboard and get the garlic. Head north, then south and into the shed. Eat the garlic and the gardener will leave. Exit the shed yourself, then walk east and look at the gate - it is closed. Return west and enter the shed again. Press the blue button and the yellow button. Exit the shed and go east, then walk through the gate.

Once out of the maze, go west twice then east. Walk between the plants without touching them, and get the magnifying glass. Head east twice more. Go over the bridge - don't get the matches wet! Continue east to see some bees, then go back to the west. Drop the matches here. Walk west twice, then enter the shed and press the green button. Leave the shed and go east twice. Get the matches and catnip. Head right 3 times - you will be bitten by a snake. Look at the bottle you have, then drink from it.

Head east along the upper path. Walk over to the sticks and take one, then throw it and the dog will follow. Look in the dog house, then take the dynamite. Go west, then east along the lower path. Go down to the street and walk west. Read the graffiti and remember the number. Go east and into the phone booth. After you automatically dial the cops, dial 1-800-333-HUGO. Quickly shoot the robot, then walk over to the man, who will give you a screwdriver. Return via the phone booth. Go up into the garden and head west twice, then south.

Climb down the rope and walk over to the blocked passage. Drop the dynamite, then light it and quickly climb the rope again. Climb down again. Walk east into a cavern with 3 exits. Take the left exit and get the lamp, then return. Go north now, and walk to the bottom of the screen, then across an invisible ledge over the chasm. Take the banana, then return to the cavern the same way. Finally, take the right passage - at the end is a ladder. Rub the lamp, then give your banana to the genie and he will open the trapdoor. Climb the ladder.

Look in the mouse hole. Walk over to the safe and open it with your screwdriver. Read the will. Now head west, then follow the corridor to the west and go to the door at the top left of the screen. Open the door and go through. Walk to the woman and answer yes, then quickly read the letter. After your drink, head south, then open the top right door and go through. Talk to the man in here, then leave again. Go south, then north and east.

Rub the bell with the catnip, then give the bell to the cat. Leave the room, then after the maid leaves, open the cupboard. Return to the east and get the bell. Look at the album you picked up. Now walk west twice, then east and south. Follow the policeman through the upper right door. Answer his question with "nobody". Get the newspaper and read it, then get the pencil. Walk to the door. Push the paper under the door, then push the pencil through the keyhole to complete the game.