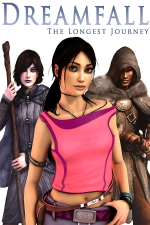 Dreamfall: The Longest Journey is the second in a series of games by Funcom, partly set in a futuristic scientific world (Stark) and partly in a fantasy parallel dimension (Arcadia). This game continues after the previous game, The Longest Journey. In this game, you take the role of Zoe Castillo, who has visions of a young girl that seem to coincide with static interference disrupting technology. After discovering the truth about the two worlds, you must try to locate April Ryan. The series continues with Dreamfall Chapters.