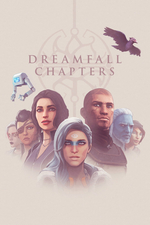 Dreamfall Chapters is the third in a series of games by Funcom, partly set in a futuristic scientific world (Stark) and partly in a fantasy parallel dimension (Arcadia). This continues after the previous game, Dreamfall: The Longest Journey. It was originally released as a series of 5 books which make up one continuous story, and tie together both previous games, with dialog choices made during the games affecting future events.