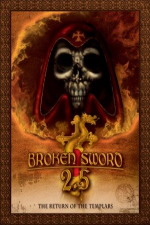 The Return of the Templars

Broken Sword 2.5 is an unofficial fan-made game that takes place between Broken Sword 2 and Broken Sword 3. It stars the same characters as in the games by Revolution Software, George Stobbart and Nicole Collard. In this game, George receives a telegram while he is overseas to say that Nico is dead, but when he flies urgently back to Paris he finds her very much alive, and not happy to see him.

After talking to Nico, go down the stairs. Talk to the flower vendor about everything. Examine the newspaper in your inventory, then leave the area.

Go inside and talk to the waitress about everything. Sit in the chair, then talk to Andre until he leaves. Go back outside and leave.

Examine the entrance and the side door, but you cannot get inside yet.

Go inside and enter Nico's apartment. Take small notes from the noticeboard and the floor, then combine them in your inventory to see the word "Baphomet". Also pick up the screwdriver from the shelves, and a pullover from the bed. Search the handbag on the table 3 times to get scissors, a hairpin, and a purple slip. Use the hairpin in your inventory to straighten it out into a lock-pick. Try to use the computer, but it is locked with a password. Use the combined notes on the computer. Next look at the answering machine, then use it to hear a message.

Go up the stairs to the left of the gallows, and talk to the tramp. Give him the purple slip, and he will give you his flashlight. Return down the stairs. Use your screwdriver on the fuse box, and you will see there are 2 batteries inside. Use your sweater to collect the batteries, then put them in your flashlight.

Go inside and enter Nico's apartment again. Use the computer to discover a new address, then leave again.

Save your game. Try to enter the hotel, then talk to the men about everything. As soon as the other guests start to come out, head inside. Talk to the boy, then go left and talk to the receptionist.

Go upstairs and pick up the paper at the bottom of one of the guest room doors - it turns out to be a hotel reservation. Go back downstairs and give this to the boy, to end up with a hotel room key. Return upstairs and use this key on the door where you found the paper. Search the briefcase on the bed.

Use your scissors on the blue balloon, then enter the alley. Give your ice cream to the dog, then go left and you will end up in Nico's apartment. You will automatically talk to Nico. Leave and go to the airport.

Pick up the red ball from the floor. Talk to the librarian, then head right and talk to the student. Use the stairs near the librarian to head down to the basement. Take the football shirt, then look at the note that was beneath it for some information regarding the fuse box. Use your screwdriver on the fusebox to open it, then examine it more closely. Press buttons 1, 2 and 5.

You will automatically go upstairs. After the librarian leaves, examine her card index box to get a new address, then leave.

Pick up the towel, then pick up the key that was beneath it. Also take the employee ID from the table. Use the key on the right door, then go through. Show the ID to the watchman at the main entrance.

Head into the grassy alley. Put your towel on the mud, then climb through the window. Talk to the woman here, and you will automatically go to your next destination.

Pick up the dog tag from the floor. Talk to the girl (Miranda). Examine the train door to see there is a rift in the middle section. Go further left and examine the dog until you get a whistle. Use the whistle on the dog repeatedly, until it is reunited with Miranda.

Return left and look at the suspicious object under the seat to find a bomb. Use your dog tag on it to get it free. Talk to the man lying down here, then search his body twice to find a letter and some duct tape. Use this on the bomb in your inventory. Next use the bomb on the rift in the door. Talk to Miranda again to get the whistle back, then use the whistle on the dog.

Enter the pub on the right. Talk to the barkeeper until you get a room key. Go upstairs and use your key on the door, but it won't open. Go back downstairs to find that the barkeeper has left. Take the soap from the bar, and also take a needle from the glass on the bar. Talk to Mike and Steven until you accept the challenge. After losing, ask about the drink, then leave.

Outside, enter the pharmacy at the far left. Look at the phials on the counter to see they contain laxatives. Read the newspaper in your inventory, then use it on the pharmacist to get a phial.

Return to the pub and use the phial on Mike and Steven. Pick up the glass from the table, then use it on the table. Now use the dog tag on the soap, then use the soap cubes on the table. Exit the pub, then enter again. Talk to Mike and Steven and accept the challenge once more, and you will win. Go back upstairs and use your room key on the door.

Talk to the bound man, then leave. Try to go to Musee Crune again, but it is closed.

Try to talk to the passersby, then read the poster on the light post.

Talk to the passersby (this will take several attempts).

Talk to the cashiers, then head right while their backs are turned. Talk to the watchman about everything, then talk to him once more. After he leaves, head left. Pick up the magazine, then look at the info plate it was on. Leave and go to the airport.

In your inventory, combine the key ring, thread and broomstick to create a fishing rod. Use this to get the chocolate from the souvenir shop. Give the chocolate to Gamin. Now you can climb down the well.

Examine the heap of debris on the right, then pick up half of a key. Try to move the brick on the left, then use your screwdriver on it and take a second half of a key. Dismantle the fishing rod, then use the thread to tie together the key halves. Use the key on the slot immediately to the right of the Baphomet statue.

Save your game. Pick up the seal, then quickly use it on the deepening to the right.

Read the letter on the table. Leave and go to the airport.

You will now end up behind the beverages trolley. Talk to the passenger further back on the right. Return to your seat in the front row. Turn down the offer of a drink supplied by your neighbor. Pick up the wallet and coins from the floor, then look at the wallet to find a photo. Look at the wallet again.

Go down the stairs and through the doorway. Pick up the rock and use it on the seal in your inventory. Save your game. Talk to Arruda, then quickly use the seal on him.