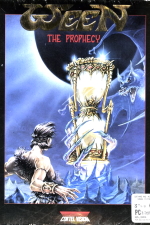 Ween: The Prophecy is a surreal fantasy adventure by Coktel Vision, developers of the Gobliiins series of games. You take the role of a wizard, on a quest to retrieve 3 grains of sand. These must be placed in an hourglass to defeat an evil foe.

Click on the crystal ball. Pick up the copper ball and tongs, then open the cupboard and take the lard and the knife. Go through the door on the left. Get the straw, then use the knife on the reed. Use the tongs on the wooden rails. Go back through the door. Put the wood and straw in the fireplace. Go through the curtain on the far wall. Get the key and use it on the skull. Get the ring, the bottle of digitalis, the tablet, and the seeds. Take the portrait and put it on the hook. Use the digitalis on the seeds, and then the seeds on the hideaway. Get the wooden mold from the hideaway and go back through the door.

Use the knife on the reed, then use the flute on yourself. Give the strawberries to Urm and get the jar of jam and gold. Use the flute again and give the jam to Urm. Now use Urm on the fireplace. Put the gold in the cauldron, then put this on the fireplace. Take the cauldron again, and use it on the wooden mold. Return through the curtain. Use the key on the padlock, get the half-statue, then go through the trap door.

Get the torch, planks and tibia, then use the torch on the hearth. Put the lard in the cauldron and put it on the hearth, then pick it up again. Go left, get the rope and use the cauldron on the bowl. Use the ring on the cauldron and put the copper ball in the orbit of the skull. Get the moon stone and put the tibia in the opening. Pour the oil in the tibia then use the lever. Get the copper ball and go back to the right. Use the rope on the planks and use the bound planks on the precipice. Cross the bridge to get to the seal.

Try to get the sword; then unhook it and get it. Use the sword on the statue, then use the trap. Make the cauldron again and get two lots of acid. Click on the mechanism - click on the sun and moon, so all four buttons are up. Next push the crown button. Push the sword and moon buttons down and push the crown again. Get the elixir and effigy from the hideaways and go back through the door. Talk to Borgol. Use the acid on the limestone deposit covering the seal and put the effigy in its niche.

Use venom on the snake and get the tiara. Turn the cauldron into the copper ball, then use the tiara on the ball. Use the pipe on the wasp trap and get it. Use the torch on the bushes and the trap on the wasps. Enter the doorway.

Click on the bottom parchment 5 times. Use the trap on the wasp. Get the cherries and use the flute. Give the cherries to Urm and use him on the wasp trap. Leave through the door on the right.

Talk to Borgal again, then place the tablet you've been carrying around on the chair next to the other one. Click on the eye on the right of the screen to translate the message, which you can then read with some help from your magician friend. Click on the mechanism to the left of the sword door - click on the bow and arrow, the animal, the pot, then the drumstick. Use the lever and then go through the door. Click on the door mechanism and pick up the vial. Click on 1, 3, then 4 and turn the lever, before going through the door.

Use the bowl to collect some resin, which should then go on the flower. Get the horn and tropical creeper. Use the horn, then the creeper on the piece of wood. Get the pickaxe and use it on the grass at the lower left hand corner of the screen. Get the pot and use it on the spring, then pour the water on the mushrooms. Get the stone and wait for the bird to try and get the insect. Throw the stone at the bird. Click on the eye of the skull and get the worm. Use the worm on the mushrooms and go down the staircase.

Get the strawberries, flute, net, oar, and coconuts (by hitting the tree). Use the flute and give the strawberries to Urm. Get the gold and give it to the monster, so you can get your stuff back. Use the net on the sea and use the sword on the fish. Give the eggs to the spider and get the sail. Use the sword on the bamboo and the hammer on the boat ribs. Put the coconuts in the lobster pots. Put the oar in the boat notch and the bamboo and archboat ribs on the boat. Use the sail on the mast and attach the lobster pots to the boat ribs.

If at any stage the boat fills up with water, use the cauldron on the water 4 times). Use the hammer on the lock and look in the hold. Get the tar. Turn the sword into the pipe and use it on the tar. Then get the bottle with the pipe and get the cork. Use the cork on the tar and put it in the hole. If the hole is covered, bail out the boat. Use the hammer on the cork as soon as it is in place.

Get the key from the boat and use it on the lock. Go into the hut. Get the shovel, talk to the man and go back out. Use the shovel in different places in the sand until it breaks (8 times). Look in all the holes and get their contents. Use the sword on the oyster to get a pearl. Go back in the hut and give the old man everything you found, plus the ecu. Then use the flute and give the strawberries to Urm. Give the gold to the man and he will leave. Pull the ring and use the sword on the planks in the back wall. Go upstairs.

Use the sword on the rightmost branches to make arrows, and the leftmost branches to make a bow Turn the sword into the cauldron and put it on one of the holes, then click on the Orivor. Get the pendulum and move it around until it swings. Turn the cauldron back into the sword and use it to dig where the pendulum swung. Get the gold and give it to the Orivor. Use the rope on the large branch to finish making the bow. Shoot the bow at the walnut. Use the pipe to get the feathers, and then use them on the arrows. Shoot at the walnut again, then form the sword again and break open the walnut.

Mix the truffles and the pollen in the cauldron, and use the potion on Borgol, then on the statue. Next mix the truffles, the venom, and the pollen in the cauldron to make a change potion. Use it on the coin. Use pollen on the quartz. Turn the lever. Click on the ant, get the pistil from the flower, and give it to the him. Get the bolt and three grains of sand before heading back to the right. Look at the mechanism in the hideaway, and put the axle in the orifice. Turn the lever and get the key. Go back to the left.

Make the sword and use it on the ornament. Keep using it on the hole until a ruby appears. Turn the sword into a cauldron. Add truffles and venom to the cauldron and use it on the ruby. Look in the rightmost hideaway. Click on it repeatedly until the creature spits out a pile of glue. Get the glue with the bowl. Repeat the following process until all the hideaways are lit.

Put truffles and pollen in the cauldron and use the potion on the jewel. Make the sword and use it on the crack. Get the firefly and use the glue on it. Put the firefly into one of the dark hideaways. You will find another jewel. When you find a broken jewel, put some glue on it and the flawed jewel, and put the pieces together. When you find a hideaway with a hole in it, put the copper ball in the hole then remove it.

Get the twig from the far right hideaway. In each hideaway, flip the lever repeatedy until a pedestal rises and 3 letters light up. By the end, all the letters should be lit and all 5 pedestals up. Using the bow, shoot the letters KRAAL.

Save your game, because time is a factor in this final stage.

Starting at the right lever and going progressively towards the left, click on each lever 4 times. Next, click on the carving and push the letters DJEL. Look in the hideaway. Put the heart in the orifice and get the knife. Use the knife on the bamboo two times, and then use the flute. Get the stone and put it in the hole in the carving. Click on the letters AZEULISSE. Get the second statue and put it in the hideaway with the first. Finally, take the grains of sand and put them in the revuss.