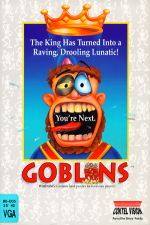 Gobliiins is the first in a series of slapstick adventure games by Coktel Vision. You control 3 goblins, each with different abilities, and must coordinate their actions to solve puzzles. Your quest involves tracking down the wizard Niak in order to reverse a curse that has turned the king insane. Instead of save games, you can start from any level by entering an appropriate level code (listed below in the walkthrough). The series continues with Gobliins 2.

Off to See the Wizard

Notice that the cattlehead's horn is quivering - get Bobo to hit the arch to knock it loose. Have Dwayne blow through the horn to cause a branch to fall from the tree. Convert the branch into a pickaxe using Hooter, and get Dwayne to pick it up.

Get Hooter to increase the size of the 2nd and 4th apples from the left, and get Bobo to knock them loose. Finally, get Dwayne to pick them up and use them to bridge the gap. Cross the bridge and use the pickaxe on the diamond.

Simply use the diamond on the front door.

Cast a spell on the plant on the left. Use Dwayne to pick up the pot on the left, and open it near the right-hand plant. Get Bobo to climb up the left plant, and walk right past Hooter to knock the red book onto the floor. Get Dwayne to climb onto the desk (using the book as a ramp) and give the diamond to the wizard.

Hooter should cast a spell on the metal loop in front of the hunchback, and then Bobo should climb up the metal rod and pick the statue's nose. Have Dwayne stand on the tongue, and leave Bobo where he is. Cast a spell on the S over the coffin, and run down to stand on the tongue. Punch the nose again, and wait. When the zombie has left, punch the tongue one last time and pick up the mushroom.

Cast a spell on the bag, and get Dwayne to pick it up. Move Hooter to the end of the right-hand branch and Bobo next to the scarecrow. Plant the seeds, and when the birds appear, get Bobo to hit the scarecrow. Cast a spell on the cloud to start the rain, and pick the newly grown flower. Give all of your stuff to the wizard when he appears, and you'll be thrown in a dungeon!

The first step is to cast magic on the skeleton, and then on its loose bone. Pick up the flute and play a tune for the snake. Move Dwayne onto the end of the right-hand plank, and have Bobo hit a boulder onto the other end. Get the wizard up to the top level in the same way.

Have Dwayne walk toward the tree roots, and then over to pick up the meat (avoiding the dog).

Use the meat with the hole in the bottom left of the tree, and then cast a spell on the wiggling leaves. Move Dwayne to the end of this limb, and get Bobo to pull the branch that's sticking down. Catapult Hooter up as well, and cast a spell on the cork, to free it. Pick it up and plug up one of the central holes at the top of the tree. Move Dwayne over to the left and down the ladder and to the left end of that branch to fall down near the windsock (then pick it up). Catapult him back up and stand him next to the unplugged hole. Get Bobo to hit the bird that keeps popping out of the hole, and when it appears next to Dwayne, bag it with the windsock.

Have Dwayne approach the dog fron the front (to avoid waking it) and release the bird. Walk up to the dog (again from the front) and cast a spell with Hooter. When the dog has left, use Bobo to bash the small door.

Dwayne should climb up to the desk and get the feather, and tickle the skeleton's foot. Drop the feather, and change it into a flyswatter. Pick up the cup-and-ball and give them to the skeleton. Pick up the key and release the monkey from his cage. Get the flyswatter and have Dwayne walk to the left side of the shelves above the desk. When the blee flies in, use the flyswatter. Change the bee into a dart, and throw it (using Dwayne) at the wizard's picture. Pick up the doll, and the yellow bottle of elixir to end the level.

Cast a spell on the rock to the left of the plateau. Pick up the stick and use it in the hole in the plateau. Get the can and use it on the third from right, and far left carrot tops. Cast spells on each of these. Hit the carrot holding the key, and use the key in the keyhole carrot.

Climb up and hit the bananas. Pick up the fallen banana and use it on the hound. Pick up the soap and red nose in turn and use them on the hound as well. Take the book and walk over to the gate. Cast a spell on the gate and move Bobo over there.

Cast a spell on the little brown thing underneath the shield. Hit the newly formed lever. Cast a spell on the cork in the genie's ear, and then have Dwayne read to him from the book of witchcraft (note where the tears land). Get the bowl from the right side of the screen and place it where the tears landed, before reading to the genie again. Climb up to the left turret (where you started) and pick up the bait. Drop the bait where you originally found the bowl. A troll should come out and stand next to it; go back and pick up the bowl of tears and throw them on the troll. Pick up the catapult.

Use the catapult on the bananas. Hit the lever to lift the gate in the moat. Get all three goblins onto the shark's back.

Cast a spell on the rock near the skeleton's left foot, to create a ladder. Move Bobo to the upper right wing tip, and Hooter to the skeleton's neck. Have Dwayne use the catapult on the wizard. When Dwayne has been taken, cast a spell on the gargoyle. Now, when Hooter has been taken, punch the turtle. Have Dwayne pick up the empty bag, place it beneath the hanging Bobo, and wait right beside it. Cast a spell on the thread holding Bobo, and three baby spiders should fall into the bag. Quickly pick it up and throw it in the cauldron.