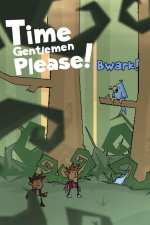 Time Gentlemen, Please is a comedy point-and-click adventure written using Adventure Game Studio. This is a continuation of the previous adventures of Ben and Dan in Ben There, Dan That! This time, the two protagonists travel through time to try to correct the mayhem they caused in the first game. The next game to star the same characters is Lair of the Clockwork God.

Tell Hitler to wait it out, then lock you away, then say that you don't mind sharing. When you are in jail, use the time travel stick. Select any of the 3 options. Talk to Old Man Eckles, then answer his questions with "Churchill", "Neville Chamberlain" and "I don't know".

Open the cake box on the floor, then use Dan on the cake. Talk to Old Man Eckles again, then use Dan on him to get the map from his pants. Examine the reel in your inventory to get the tape, then use this on the rasp, then on the arrow. Use this combination on the bars on the window, then climb out.

Check out the coat on the left, then take the hip flask from the pocket. Next use the handbag and take the tights from inside. Pick up the umbrella from the floor. Use the hula doll on the table. Now head right and open the cupboard door, then take the mouse trap (complete with dead mouse).

Return left and use your lift arrow on the cuckoo clock on the wall - change the time to 10 o'clock then quickly use the doll that appears and you will remove its dress. In your inventory, put the dress on the dead mouse, then switch this with the hula doll. Use the hula mouse to get the mouse out of its hole, then take the sundial piece from the hole.

Use your piece on the sundial, then open the blinds. Look at the sundial to see it indicates the time 10:20. Change the time on the cuckoo clock on the wall to the same time. Click on the picture of the clock tower 3 times to change its time to 10:20 as well. Walk right to the digital clock and use it twice to turn it to the correct time. Now enter the grandfather clock.

Go down the stairs and take the skateboard and the wrench. Head to the far left and open the bottom drawer, then take the power cable from inside. Now use your umbrella with the bookshelf to get a book. Read the book in your inventory to discover the robot is the professor. Look at the robot, then at the schematic behind the workbench, and take the pin from its top right corner. Now look at your map and return to the prison.

Use your tape on the fridge magnet, then take it from the fridge. Open the fridge and take the jar from inside. Now use your wrench on the cog over on the left, and you will end up getting the cog. Use your umbrella on the skeleton's hand in the cage, then pick up the floppy disk and the hand. Use the map again.

Walk over to the workbench. Use your cog on the yellow generator, then add the tights to use as a belt. Fill the right side of the generator from your hip flask. Now attach your extension cord to the from of the machine, and press the green button. Try to pick up the other end of the extension cord, then get Dan to do it instead.

Pick up the skate that is lying next to Ben, then use the small time rip on the left.

Use your skate on the water dripping on to the floor, then go back.

Put the wet skate in the time machine and slide the lever to the right, then press the red button. Pick up the wheels and combine them with the skateboard in your inventory. Use the fixed skateboard on Ben, then push him through the time rip to wake him up. Now walk through the rip again.

Use your magnet on the left doorway to get a nail. Continue left and take the skateboard and some condoms from the pile. Use your map to reach the basement.

Use your hip flask on the robot to get some oil from the ground. Head right, up the stairs and through the door. When the guard is not looking, use the flask on the ground, and he will slip over. Use your map and head to the ruins.

Walk right and talk to the guard, then give him your mouse trap. When the next guard arrives, give him your spanner. Now head through the rip.

Take the feather from next to the tree, then go right and take a snotty tissue from the ground, and a stick of dynamite from the box. Use your map to return to the basement.

Put your snotty tissue in your jar. Put the jar in the time machine, move the lever to the right, and push the button to make a dino virus. Use your map again.

After the conversation, open the fridge, put your jar inside and close it again. Use your map.

Use the time rip here, then talk to the clown. Give him your condoms and he will give you a balloon. Leave the time rip by heading left, then use your pin on the balloon to scare the worker. Pick up the toffee he spits out. Use your map.

Put your skeleton arm in the time machine, make sure the lever is over to the left, then press the button. Look at the arm to see a code. Use your map again.

Talk to Frank. Salute him and give him the password. Ask for his saw, then take it before using the map again.

Put the saw in the time machine, move the lever to the left, and press the button. Pick up the saw again and use your map.

Put the pig's tail in the time machine, move the lever to the right, and press the button. Pick up the hardened tail and use it to open your bottle of alcohol. Use your map again.

Pour the alcohol on the coals under the pig. Use your magnet on the caveman on the left to get his glasses. Use these on the coals and when the light shines through it will start a fire. Light your dynamite on the fire then use your map.

Go right and talk to the guard. Talk about Hitler and ask to go inside, then threaten him and you can pass. Look at the keypad and read the plaque, then use your map.

Use the keypad and head inside.

Use the glasses on the laser beams, then get Dan to flip the switch on the right. Pick up some dino flesh, then use the teleporter on the right.

Look at the hand scanner, then use your map.

Put the arm in the time machine, move the lever to the right and press the button. Pick up the skeleton arm and use your map.

Head into the mech. Use the skeleton arm with the bloody toilet to get some of Hitler's DNA on it, then use the map again.

Use the skeleton arm on the hand scanner then use the teleporter on the right.

Read the plaque to the right of the microphone, then use your map.

Head into the mech again. Get Dan to use the microphone, and make him say "We have meat here in the building". Head outside and use the parrot to record the message. Use your map.

Use the parrot on the microphone, then go through the time rip.

Put your dynamite in the crack at the base of the tower, then when the updraft appears, use your umbrella on it. Throw some more dynamite into the crack, then take the umbrella and you will also get a crystal. Use this crystal on the space pod to bridge the gap. Now talk to Dan about the crystal and give it to him so he figures out the binary code. Use your feather on the bloody tree stump to make a quill, then give Dan the crystal once more - you will get the binary code using the quill/feather and the error message as a piece of paper. Use the time rip on the left.

Use the teleporter on the right.

Play the game using the joystick, but you can't win. Give the binary code to Dan and he will put it into the game. Now play the game again and use the crystal on the switch to turn off the force field. Exit the game and use the teleporter on the right.

Take the blueprint from the wall, then use your map.

Put your blueprint in the bucket, then use the map.

Take the kitten by itself on the left, then use the map.

Retrieve your blueprint and use the map.

Put the blueprint in the time machine, move the lever to the left and press the button. Give the blank blueprint to PAL and ask him for a small exhaust port. Use the map again.

Put your blueprint in the bucket again, then use the map.

Use the kitten on the exhaust pipe, then you will use the final teleporter.

Walk over towards Dan and Hitler will fire his laser beams at you. Use your glasses on the beams to deflect them at the dino robot. Use your magnet to get the robot's jaws, then sharpen them in your inventory using the rasp. Use the sharpened jaws on the gargoyle to cut off its wings. Push the skateboard back towards Dan.