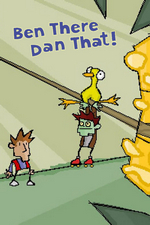 Ben There, Dan That!

Ben There, Dan That! is a comedy point-and-click adventure written using Adventure Game Studio. The game starts with the two protagonists trying to fix their TV signal and ends up with an outer space adventure. The story continues in Time Gentlemen, Please.

Look at Dan, then use the Whizzo-bang firework from your inventory on him. Pick up the cigarette lighter from the ground and use it on the firework.

Look at the note on the back of the door and try to take it. Try to take all 3 posters off the wall, and you will end up getting the Sam and Max poster and revealing a window. Head through the door on the left to find a hallway with 3 more doors. First go into Dan's room and look in the closet to find a coat hanger. Go back out to the hall, then into Ben's room. Search the bed and take the scissors and glue. Go back out to the corridor and into the WC. Try to flip the switch, but the wiring is not safe, so get Dan to do it instead. Now use your scissors on the wire and take it. Go back to the lounge and use the wire on the television, then the coat hanger on the end of the wire. Open the window and pick up the coat hanger, and you will get some reception, then get teleported.

Look at the locks on each of the doors to see you need different shaped items to open them. Go left until you see the lock shaped like a bunny rabbit's head. Use your scissors on your poster, then use the rabbit's head on the lock. Go through the door.

Pick up the dead man's hand, then walk over to the church and head inside. Read the markings on the pillars to see 6 bible references. Continue right and read the bible. Look up each of the references, and you will note that passages 1, 4 and 6 all mention flames. Use your lighter to light candles 1, 4 and 6 starting from the left. Pick up the bible and head down the stairs. Walk left to meet the priest, then hit him with the bible and take his crucifix. Open the door to meet Gilbert. Throw your glue at him, then you can safely take the doll. Go back to the spaceship. Put your crucifix in the next lock to the left, then head through the door.

Open the right door, then take the yellow note and examine it in your inventory to find some blutak. Pick up the rock and look at the Yin - you can't reach it yet. Go back through the left door. Use the ninja action figure doll in another lock and go through the new door.

After the newspaper blows into your face, walk over to Fish 'n Fries shop. Look at each of the men, then talk to them; in particular make sure you ask about the blueprints. Look at the door to see it is boarded shut. Head back toward the castle, then up to The Limey. Take the sponge, then try to take the key, but the barman won't let you. Talk to the 3 louts until they start singing and the barman comes to fill their glasses - while he is busy, take the key. Go through the right door, then into the men's toilets. Try to pick up the urinal cakes, then pick them up with your newspaper. Use the condom machine to get lots of 10p pieces. Enter the women's toilets, then use your key to unlock the left door and go inside. Switch the pipes to the two barrels, then return up to the bar. Talk to the louts until they drink again, then take the barman's hat. Leave the bar, and return to the alien spaceship. Use the top hat in the lock just to the left, then head through the door.

Look at the control panel in the lift, then smash it with your rock, and use the wires in the panel to fix it. Close the panel and press the up button to reach the top floor. Talk to all of the dinosaur programmers. Pick up the thermos from the desk, then use your scissors on the cardboard box and take the consoles. Go to the back of the room and use your 10p coins on the Chuckie Egg machine. Play the game, but you will lose. Put another coin in, and get Dan to play. Now that Carl is distracted trying to beat Dan's score, go and use his Death Star toy. Pick up the X-Wing toy, then return to the spaceship. Go through the secret door that has just appeared.

Pick up the crowbar, and look at all the machines, pictures and notices around the room, then return to the corridor. Go through the stick figure door.

Go to the Fish 'n Fries shop and use the crowbar on the plank of wood. Give the consoles to the men, then take the moonshine. Return to the spaceship. Use the X-wing toy in the X-wing lock, then go through the new door.

Collect some lava in your thermos, then use the plank on the lava. Walk across and take the spanner from the stone man, then return through the door. Use the spanner in the lock just to the left, then head through the spanner door.

Use the lava on the ice-block to unfreeze the man. Talk to him, but he won't return to work until he warms up a bit. Give him the moonshine, then talk to him again. Use your crowbar on the panel, then talk to the guy one more time, and he will start working. Pick up the cog, then also try to take the frozen rope holding up the sign on the far right. Return to the corridor and go through the X-wing door.

When you enter the room, the frozen rope will defrost. Leave again. Head to the far right and use the cog in the cog lock, then go through the door.

After talking to the Human Aeroplane, enter the museum. Talk to Mia, then try to enter the exhibit - you need a ticket. Talk to Bob the Blob, then throw your sponge at him and take the ticket. Give the ticket to Mia and enter the exhibit. Look at the two plaques and two displays, then take the can opener from the right display. Talk to the 3 superheroes, then look at the 3 objects on stands. Swap your dull rock for the clump of mud. Head right into the Yang room. Talk to the 3 superheroes - you need to somehow distract the forcefield guy to be able to steal the Yang. Return to the spaceship, and enter the crucifix door.

Use your can opener on the lamp post to create a bridge. Now combine the dead man's hand with the blutak, then with the rope. Use this combination to get the Yin. Return to the spaceship and go through the stick figure door.

Go to the Yang room and swap your loo cakes with the sugar cubes. After the forcefield guy collapses, throw your mud at the security camera, then pick up the Yang. Go back to the spaceship.

Combine the Yin with the Yang, and put the combination in the final lock. Go through the door.