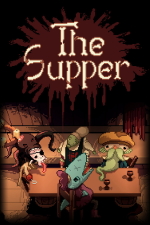 The Supper is a short horror adventure game by Octavi Navarro, creator of the Midnight Scenes games. It follows the story of Ms Appleton, who is commanded by The Voice to serve a very special meal to her customers.

Pick up the fire tongs, and use these to grab an ember from next to the large pot of special sauce. Read the recipes list on the wall. Head out to the dining room and use your fire tongs and ember on the candle chandelier. Pick up the empty water jug from the small table in the corner. Go to the right and ring the door bell, then try to go outside.

Return to the kitchen and smell the special sauce, and some guests will arrive. Go out to the dining room and walk right to meet them. Talk to each of the guests, then head outside to the right.

Try to talk to the fisherman, then use his fishing pole and pick up the wet boot. Return left and throw the boot at the pigeon on the sign outside the tavern. Pick up the blue pigeon, then head back to your kitchen. Put the pigeon into the special sauce to finish the dish. Head out to the dining room and give it to the old man.

Pick up the rusty scissors that the old man dropped. Go back outside and head right. Use your scissors to cut the rope that is holding the ladder, then climb up. Go down the trap door on the right. Use the water jug in the puddle to fill it with water. Pour this water on the seedling to the left, then grab the chili pepper. Climb back up and enter the Captain's cabin to the left. Take the butcher knife.

Head all the way back to the kitchen. Use your butcher knife on the swordfish tail, then combine this with your chili pepper. Put the spicy blue swordfish into the special sauce to finish the dish. Head out to the dining room and give it to the mind-controlling fungus.

Pick up the slimy tongue from the table, and the jailer keys from the floor. Go outside and head left, using the jailer keys on the jail door. Pick up the skeleton hand and return to the kitchen. Grab some solid wax from the barrel on the right. Put this into the empty pot on the small stove. Now put the skeleton hand in the boiling wax. Combine your wax hand and slimy tongue. Put the wax hand and tongue into the special sauce to finish the dish. Head out to the dining room and give it to the deadly shark.

Go outside and push the wooden cart back into the tavern. After you come back out, use the lever.