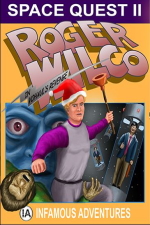 Space Quest 2 Redux: Vohaul's Revenge is an unofficial re-release of the second game in the long-running series of comedy sci-fi adventures, Space Quest 2: Vohaul's Revenge. The series stars Roger Wilco, space janitor and reluctant/accidental hero. In this game, Roger is captured by Sludge Vohaul, but the ship on which he is being transported crashes on the planet Labion. Roger must survive the harsh planet and thwart Vohaul's evil plans.