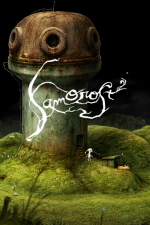 Samorost 2 is the second in a series of surreal fantasy adventure games from Amanita Design. This game follows on from Samorost. Your adventures with the little white space gnome continue as you must attempt to save your kidnapped dog. There are 13 Steam Achievements, all documented in the walkthrough below. The series continues with Samorost 3.

Watch as the aliens land near your lighthouse Intro. Click on your dog's kennel and he will be stolen Hatch.

Click on your character in your space ship, then click on the green bug and put it on the branch that is trapping you. Walk to the far left Snailman.

Enter the round house. Open all three bottles, and pick up the large cork that ends up on the floor. Look at the two creatures on the branch on the left; click on the small one followed by the large one, then while the large one is distracted, fill the hole with the cork. Back in the house, turn the right handle to adjust a funnel on top of the house (so it points more to the right). Look outside to the right and click on the small creature twice so that it shakes pollen into the funnel, then down into the pot. Click the large lever just left of the house twice to pump water into the pot. Turn the tap beneath the pot, then turn the tap outside. When the right creature falls asleep, take his hammer.

Back at the previous screen, hit the robot on the head and you will climb down the ladder Pit.

Walk right on the large pipe and it will break; a fly will appear and land over on the left. Remove the small rock that is blocking the path of the crawling insect. Now wait for this insect to crawl up higher and click on the possum so that it gets eaten (this requires timing). Click on the fly to move it up to the vomit on the pipe, then click on yourself to shake it free. After it gets caught by the spider, click on the fly again to swing out of the area Pantry.

Open the fridge and a mouse will run up to the hole in the ceiling. Click on this hole twice and a double adapter will fall down. Plug this into the powerpoint on the wall, then click on the cable on the floor and plug this in. After the fridge vibrates out of the way, take the hook and attach it to the manhole cover; climb down but it is too dark to see anything.

Head into the passage to the right to see one of the creatures that captured your dog. Ignore it, and take the flashlight from the wall. Go back to the left and down the manhole Sewers.

Put the silver disc on a string into the machine, and press button 1. Take the wrench from the robot that appears and use it to undo 3 of the 4 nuts on the large machine to the right. Give the wrench back to the robot. Pull the disc out and put it back in again, then press button 2. Take the second wrench and use it to undo the final nut. Pull the belt out of the machine and then wait - you will end up going back to the first area. Continue right and climb up the ladder.

Move the lever on the left wall to stop the green fruit from appearing. Move all the fruit into the left basket, then climb into the funnel on the right Budoir.

Pick up the sausage on a rope from the left, and hang it from the skull just to the right - this will spin the fan the other way. When the creature's hat lifts up, quickly press the red button on his chair to be returned to the floor. Now quickly move the chair, then pick up the key that falls to the ground. Use the key on the cage to rescue your dog. Press the button to the left of the door to exit. You will fly away and then crash Plain.

Pick up the parachute from the ground to discover your dog. Click the bottom of the pole to get your dog to push it, then click on yourself near the right end of your second swing to jump down. Now click on the butterfly while it rests in the middle of the screen - it will land on the flower on the right and a shoot will project out to the left. Now quickly click on the small creature on the ground and place it on the shoot, so the large creature will flip over. Click on it to ride to the next area Woods.

Click on the man to see that he wants a pipe. Take a bell from his hat and place it on the end of the branch just left of the bird. While the bird goes to investigate, click on its nest and a pipe will fall out. Give this to the man, and he will then want a pouch. Click on the hole beneath his tree stump to send your dog down Burrow.

Click on the top of the pouch behind the angry creature to lift it up. Now go and drink some water from the left; when you return to the right, water the plant just to your left and it will grow. Repeat this 2 more times and the plant will grow to reveal a bone. Give the bone to the creature, then take the pouch.

Up the top again, give the pouch to the man. After the bug has lit the man's pipe, click on it to follow it to the next screen Lighthouse.

Put your balloon on the upward facing spout on the left mountain. Pick up the tallest plant and use it to tickle the nose of the sleeping creature on the right mountain - it will sneeze and send the pitchfork flying down into the bucket. Use the pitchfork to put some food into the tray, and a creature will come to eat. Quickly turn the dials on the left mountain to line the pipe up and catch the bubbles, then when a bubble is caught, turn the tap on top of the mountain to fill up the balloon. Repeat this 2 more times. Drag the inflated balloon on to yourself to climb back down the mountain.

Return the balloon to the top of the machine where you found it. Now go over and stand on the taxi. Jump on the taxi to lower it, then quickly pull the plunger on the machine and press the bellows while the taxi is lowered; gas will enter the taxi if your timing is correct (otherwise, head back up the mountain to fill the balloon again). While you are standing on the boat, click on the driver and he will take you away (you may need to wake him up with coffee once more) Happy End.