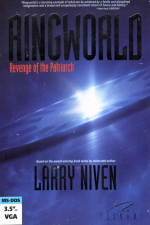 Revenge of the Patriarch

Ringworld is a science fiction adventure set in Larry Niven's "Known Space" universe. In this game, you take the role of Quinn, a mercenary charged with travelling to the Ringworld to attempt to prevent the Kzinti from exterminating the Puppeteers. The series continues with Return to Ringworld.

Touch the beam to get the Kzin's attention. Show the ring as evidence and continue your conversation inside. Shoot the enemy Kzin after the assassination and steal the security disk. Run away from the scene. Put the disk in one flycycle and press "slave", then in another and press "master". Use the bike's controls.

Stun the Kzinti, then follow the girl and stun her too. Plug in the hyperdrive cables according to instructions in the manual. Place the security disk in the autodoc to convince the girl.

Talk to the people. Get some ale from the food synthesiser on the lander (2nd level) and give it to the big guy. Get the rope and the ladder. Put the ladder between the two doors outside and climb up. Tie the rope to the big rock and climb down the hole. Read the bearskin on the back wall and remember the pattern. Go into the other room and take the necklace. Go back and climb back up the rope. Go to the box near the force field and put the pieces in according to the pattern. Scan the ship.

Take the first-aid kit out of the storage area on level 2. After the Kzin is captured, go into the cave and get captured as well. In the pit, get the sharp bone and use the first-aid kit on the injured Kzin. Climb through the hole, then cut the tope holding the bat person. You should now get captured again. Climb out again, and get the drug. Give it to the Kzin (after getting captured again). The bat person will tell you of a secret tunnel. Stun the vampires as necessary and escape. Get the stasis box, then move the rock below and to the right of the secret tunnel entrance to free your companion.

The girl will open the stasis box and give you the contents. You will now have an arcade sequence during which you must collect the second stasis box.

Talk to the water creature, then put on the spacesuit and exit through the airlock (2nd level again). Follow the creature to the coral house. Back on the lander, use the probe controls (panel at the bottom right of level 1) to get the arms off the probe. Use the panel on the left edge of the 1st level to get the flycycle.

Stun the man and take the jar from the desk. Uncork the barrel and fill the jar with grease. Get the key out of the hole in the wall (near the calendar). Get the slip of paper off the right edge of the shelf. Look at the chair - spin it according to the numbers written on the piece of paper. Unlock the safe and get the translator.

Give the man the jar with grease, the translator, and the probe arms. Get the stasis box.

Go to the castle. After talking to the slavemaster, get some straw off the floor. Get the tunic after the Patriach removes it. Show the tunic to the Kzin guarding the Patriach's chambers. Get the candle, then enter the closet. Touch the arrow in the quiver to open the secret cabinet. Get the swords - in the bedroom, put the short sword in the post near the closet door. Get the stasis box, then put straw on the bed and light the straw with the candle. Go past the guard - when he enters the room, go towards the top of the screen (to the balcony). Use the scanner on yourself to call Kzin.

Use the stasis control box on the ship, then touch the small hatch. Enter the correct combination (follow these numbers):

Touch the alien to get it out of the ship, then put the helmet on the alien. Use the magnetic key on the panel inside the ship. Use the empty stasis box on the antimatter compressor inside the panel. Take the stasis box and the two modules near the ends of the wires. Use the neural nullifier on the alien, and put it back in the ship.

When the lander is approaching the Destroyer, use the module from the alien ship to transport back to your ship.