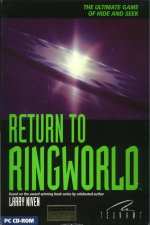 Return to Ringworld is a science fiction adventure set in Larry Niven's "Known Space" universe, and is the sequel to Ringworld. In this game you control Quinn, the protagonist from the first game, as well as his 2 companions, Seeker and Miranda. You take refuge on Ringworld after finding themselves fugitives, and you must find evidence to clear your names.

Pick up the green stepping disk, then use the table and take the stasis negator from inside. Leave your room and enter the door to the far left, where you should collect the sensor probe, hyper-conducting attractor unit and reader device. Use the sensor probe on your stepping disk and stasis negator to extract power capsules, then use the charged power capsule in the stasis negator. Leave this room and take the elevator up to the bridge. Talk to Miranda and Seeker, then return to the elevator and go down to deck 5.

Take a loose optical fiber from the wall, then move the loose panel and take the multi-purpose retention clamp. Head through the door on the left. Open the storage cabinet on the back wall and take the com-scanner from inside. Use your optical fibre on the wire panel of the large autodoc machine, then use your reader on the shelf next to it. Press the red button to get inside, then selected "Advanced Procedures", then "Open Door". Take the reader again, then head right and back up to the bridge. Give the reader to Miranda (she won't take it until you have talked about the autodoc). Return down to deck 5 and go left. Put the reader on the shelf, then use the red button. Again selected "Advanced Procedures" then "Open Door". Press the yellow button and take the small infodisk. Leave the room and now head up to the bridge again. Give the infodisk to Seeker. Return to the elevator and go down to landing bay 2.

Pick up the cable harness and use it with your attractor unit, then go through the small door to an airlock area. Open the small left cabinet and take the sonic stunner. Open the small right cabinet and take the laser diffusion aerosol. Also pick up a red rebreather from the ground here. Go back out to the landing bay and use your harness on the grey panel just right of the airlock area door. Walk right and use the controls on the far wall. Move the crane far right and back, then turn the tractor field on; when it is correctly positioned, the cable harness will have lifted up into the air. Stop using the controls, then go over and climb up.

Enter the door just to the left. Use your purple aerosol on the laser, then use your multi-purpose clamp on it. Open the door to leave and the laser will be destroyed. Use your com-scanner on the ? to bring up its interface; slide the control to the second bar from the left. Now use the com-scanner on the laser, then use your sonic stunner on it; the aerosol should disperse. Pick up your com-scanner again and set it back to its default position. Use your stasis negator gun on the quantum drive (behind the laser). Leave this room, then climb down and go left to the elevator. Head up to the bridge again and talk to Miranda and Seeker.

After the cutscene, use your computer and select "Scan Ops", "Deep Scan", "Passive Enabled" (to change it to active), then "Geographical". Click on the up button and the Fist of God will be located.

Use your stasis negator on the soldier, then use your sonic stunner on him. Talk to the trapped village chief, then you will return to your ship.

Use your computer again and select "Scan Ops", "Short Scan", "Technological". Select plan 3 when prompted. Leave the bridge and go down to landing bay 2. Use the control panel to select a human suit, then use your rebreather in the suit before wearing it. Head through the airlock.

Use the com-scanner on the ? and press the scan button to see a map with the red marker indicate yourself and the green items of interest. From your starting position, you can find the items you need as follows:

You should now be at the spaceship. Use the front window to get inside. Remove the broken display and replace it with your working one. Insert your joystick in the middle holder. Open the glovebox and take the ignitor and thruster control valve, then press the green button to head outside again. Now from left to right, insert these items into the slots on the spaceship hull:

Get back into the spaceship and use the joystick to take off.

Head south 3 times, then enter the mag-lev on the right. Examine the control panel, then use the acceleration slider to move the mag-lev until you are lined up with the elevator (watch the red lights and when the top one is lit up, watch the left display until the round elevator reaches the middle). Press the red button to exit, then go left to the elevator (you may need to go one screen north or south first).

Try to open the jammed door. If you can open it slightly you have found the right one; if not, go back to the mag-lev and find the next one.

Once Seeker is propping open a door, use the lever inside to raise the staircases, then climb up and enter the higher room.

Try to push the robot.

Use your airbag on the robot.

Use your airbag on the robot again. Now use your rebreather tank on the airbag to inflate it, then press the button on the wall to raise the console. Use the console and click the 2nd button, then the 3rd button.

You will automatically assume control of Miranda; quickly take the yellow wire when you get the opportunity.

Take the coat, then talk to the Caretaker, followed by Astor Pharisha.

Return outside once more. Now go west, down the ramp, west, downstairs, west 3 times, upstairs, west twice, up the ramp, east twice, upstairs, west and through the doorway. Take the mask from the wall. Go outside and continue west twice, up the ramp, east twice and in through a doorway. Take the blue flask from the shelf, then return outside. Walk east twice to reach the elevator. Open the left door and climb down the ladder until you reach some ice. Use the gunpowder on the ice, then use your lamp on it. Head through the doorway that is revealed. Now use the blue flask on your mask. Use the key to open the door, then use the mask on yourself before heading through.

There are a total of 18 vampires to kill in this maze, and you must kill them all by shooting them with your photon stunner (some take several shots to kill). One way to find them all is as follows:

You should now automatically remove the mask; if not you have missed one of the vampires. Walk west twice and take some scrolls from the shelf on the left. Now use the keypad on the device; press each button once and it will unlock so you can take the gem from inside. Now you must head back through the maze. Start by going east, down twice, east, up, south twice, west, up and west 3 times. Next head north, west, down, south, down and right 3 times. Continue up, west, north, up, north, west, down twice, east twice, up, south, up and east 3 times. Now head down, north, down, south, west, south, east, up, south, west, up, west, down and west 3 times. Finally go south, east, down and west twice.

Go through the door and all the way up the ladder again. Press the red button to climb back outside. Continue west 4 times, down the ramp and east 4 times. Head inside and give the scrolls to Astor. Offer the gem as well but you will keep it.

Head back outside and go east, downstairs, west twice, down the ramp, east twice, downstairs, east twice and through the doorway. Use your rebreather on the stopcock to fill it up. Go back outside and east, then use your rebreather with the balloon. Astor will give you a flute and you will take off. You will start at full altitude, drifting in a clockwise direction. Follow these instructions to land:

You should end up heading north through the river valley. After you land, use your com-scanner on the ? and press the Scan button, then walk in the direction indicated. Keep repeating this and then enter the forest when you find it. Use the flute on yourself, then follow Nej behind the trees to the east. After your conversation, shoot the guard with your sonic stunner, then enter the guard tower. You will end up at the ARM Base.

Pick up your pillow and put it in the toilet. Take the light bulb and then put your wire in the light fixture.

No need to do anything, just filling in time.

Your meal will be delivered and you will eat it automatically. Pick up the food tray and put it on the toilet, then flush the toilet. After the guard is electrocuted, leave your cell. Walk left and go through the unbarred door into a control room. Pick up the toolbox to find a laser hacksaw, then leave again and return to your cell. Use the laser hacksaw on the grille on the right and you will climb into the ventilation system. Click on the laser device and change it to this configuration:

Go east twice more and look at the vent 4 times. Now use the vent to climb through, and enter the door on the right. Use the computer console to destroy the base.

Within the large tube maze, start by setting your speed as low as it will go (10), then follow this set of directions to get through:

Open the door at the end of the platform, then the next one at the end of the hallway. Walk around the large circular room until you find a set of double doors, then go through. After the cutscene, walk into the light.