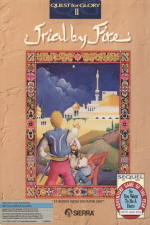 Quest for Glory 2: Trial by Fire is the second in a series of hybrid RPG adventure games by Sierra On-Line. This continues after Quest for Glory: So You Want to be a Hero. You can name your character, and choose to play as different character classes which have different puzzle solutions. In this game, you arrive in the town of Shapeir, a middle Eastern setting, and set out to investigate the disruption of the town's elemental power system. There has been a subsequent re-release of this game, Quest for Glory 2 Redux. The series continues with Quest for Glory 3: Wages of War.

After talking to Abdulla Doo, stand up and go outside. You need to find the money changer, so use your map and look at the street signs to get there (go north from Gate Plaza to find Fountain Plaza, then take the west exit and follow this road to its end, going right, left and left at the forks). At the money changer, talk to Dinarzad and exchange money (in increments of 50 coins or less to get the best trading rate).

Again use the map that came with the game to make your way back to Gate Plaza. Buy a map and compass from Ali Chica, and give a centime to Shih'had the beggar when you find him. Now you can use your map to get around. Go to Fountain Plaza and enter the apothecary. Talk to Harik Attar about potions, pills and oils. Ask him about fire and earth.

Leave this shop and go across the courtyard into the magic shop. Talk to Keapon Laffin about spells. Ask him about air.

Leave here and use your map to go to Fighters Plaza. Buy a couple of extra waterskins from Mirak (and fill these at the fountain next time you are there). Go to the Guild Hall and talk to Rakeesh outside and Uhura inside. Get some fighting practice in the room on the right inside. Sign the adventurer's book in the main room.

Now go to the Palace Plaza. Go south from here and follow this street to the end to find the Astrologer. Give him your name when asked, then ask about the future and tell him about yourself. At the end of the day, go back to the Inn and sleep. Do this every day unless otherwise specified.

Visit the Astrologer again and ask about your future. Now go to Fountain Plaza and head north. Follow this path and turn right at the fork, then take a left side passage when it appears. Knock on the door and answer the questions with your name, Keapon, Air, Aziza. Once inside, greet Aziza, then walk over to the table and sit down. Say yes to share some tea, then ask her about each of the 4 elementals. Say goodbye, then leave.

Go out to the desert by going south from Gate Plaza. Continue south from the Saurus Lot to reach the Shapeir Overlook. Head west 4 times to find the griffin nest.

You can wander in the desert and fight some monsters to get experience and raise your statistics. At the end of the day, go back to the Inn to watch Shema dance.

Go back to the money changer in the evening and say yes when told about the job. Go to the weapons shop in Fighters Plaza and pick the lock. Go inside, then close the door behind you. Use oil on the anvil then move the anvil and open the trapdoor. Pick the lock on the strongbox and take the money. Close the trapdoor, move the anvil again, open the door and leave the shop. Now wait until it is midnight. Go to Gate Plaza and head north; take the first right turn, then the first left turn and first right turn again to find a short street in the southeast of the map. Pick the lock on the door and sneak inside. Take the tea service from the shelves. Oil the hinges on the wardrobe and open the wardrobe, then search it to get an emerald bowl. About now, the first man will come in but will not see you. Move the rug and open the trapdoor; when you hear voices, roll back the rug and hide. After the second man has gone, move the rug again, pick the lock and search the chest. When you hear voices again move the rug and hide in the wardrobe. After the 3rd man has gone, leave.

Cast Detect while walking around the streets to see an arrow. Do this repeatedly and follow the arrows, or just go to the northenmost corridor on the map and cast Detect again to reveal a door. Cast Open on the door and go inside. Give your name when asked, then answer with Magic, Erasmus. In the first test, cast Detect to see which bell is magical, then cast Fetch on that bell and Trigger on the bell. You will now have 4 separate challenges based on the 4 elements. For air, cast Fetch on the staff, then Levitate and go up while the staff passes beneath you. For earth, cast Trigger on the rocks, then quickly cast Calm. Walk to the rocks and climb over, then quickly cast Calm again. For water, cast Flame Dart on the ice, then Force Bolt and Open on the crack in the ice. For fire, cast Open on the door, Calm on the fire, Fetch on the door, and Force Bolt near the top of the door. Answer no to the question.

Buy incense from the apothecary, and a lamp from Tashtari in Fountain Plaza. At the end of the day, go back to the Inn to listen to Omar's poetry.

Shameen will tell you about the Fire Elemental. Go outside the inn to find it. Use incense and head north, and the elemental will follow you. Once you get the message you have gone far enough, use the lamp, then use water.

Go to the Guild Hall to get your first reward. Next go to Fountain Plaza and listen to all 4 verses of Omar's poem, then leave and come back, and pick up his purse. While you are here, buy a pot of dirt from Lasham (he will give it to you for free). Now go to Fighters Plaza.

Shameen will tell you about the Air Elemental. Head to Palace Plaza to find it.

On the evening of day 8, go back to the Inn to watch Shema dance.

Go out to the Saurus lot and buy a saurus. Mount it and go south. From the Overlook, head east 4 times and look at the tree. Return to Shapeir (you can just say "go home" once you have a saurus) and visit Aziza. Ask her about the tree.

Go to Fighters Plaza and buy a cloth bag from Kiram. At the end of the day, go back to the Inn to listen to Omar's poetry and get your second reward.

Shameen will tell you about the Earth Elemental.

Now head out to the desert again. From the Overlook, head east 7 times to the tree. Give water then tell about yourself. Give earth and tell about earth. Finally hug the tree and say "Julanar". You will end up getting the Fruit of Compassion. Next go west 4 times and south 5 times to find the Oasis (check your compass if you need to). Talk to the Dervish and take some of his beard. Ask about him the puzzle, then about what, why, when, where and who. Mount your saurus again and use your compass, then go north twice and west 8 times to find a caged beast. Return to the Dervish by going east 8 times and south twice, and ask him about the beast. Use your saurus to go home.

Go to the apothecary and ask Harik about the dispel potion, then give him the griffin feather and fruit of compassion. Head out to the desert again. From the Overlook, go south 3 times and west 5 times to return to the beast. Give it some water, then take some hair. Give the potion to the beast, then go home.

Visit the Guild Hall and Uhura will give you a note.

Go to Fountain Plaza. Put down a waterskin, then use your bellows and pick up the waterskin again. Go to Palace Plaza and you will be given a magical sapphire pin.

Visit the Guild Hall and Uhura will give you another note. From the Fighters Plaza go north, then take the first left side passage and go right at the fork. At the end of this road enter the half-open door. As soon as the lights come back on, break your chains. When the fight starts, dodge to the right until you get your weapons, then fight until the man is knocked down. Show him mercy at the end, and you will get an Eternal Order of Fighters badge.

Go and visit Aziza. Go to the magic shop and give the beard to Keapon Laffin. At the end of the day, go back to the Inn to listen to Omar's poetry and get your third and fourth rewards. When you wake up in the morning you will automatically travel to your next destination.

After receiving your visa, enter the Blue Parrot Inn. Sit down and talk to Signor Ferrari. When he ofers you a drink, select either one.

Go outside, then back inside at sunset. Sit down and talk to Ferrari and Ugarte. Wait until evening, then go to your room and sleep. The next morning, so south (check your compass) to reach Fountain Plaza. Go to the other end of this plaza and you will see Ugarte arrested and taken away. Head back towards Gate Plaza and follow the woman into the side alley and into the house. Give her your clothes and visa and you will be given a mirror. Head back to Gate Plaza and wait until sunset, then enter the Inn. Sit down and talk to Ferrari.

Go to sleep in your room, then in the morning go outside and you will be arrested. Show your pin to the Katta here.

Take your equipment, then crawl through the passage. Outside, walk along the streets and you will be captured again.

When you regain control, use your mirror and you will end up going inside. Rub your lamp, then go west to the next screen and put out your lamp. Head up near the waterfall and jump on a log when it is near, then jump again when you are close to the opposite shore. Now you are near a strong wind tunnel.

Now head up behind the waterfall and continue east, then go east one more screen. Put out your lamp again, and walk through the lava maze, trying to avoid the flames and lava. Walk over towards the small cliff.

Approach the door and say "Suleiman", then go through the next room, ignoring the treasure. After Ad Avis traps you here, walk back down the slope towards the small stalagmite and take the ring. Ask the Djinni about wishes, then wish for any two skills (or health and 1 skill), then ask to be teleported.

Walk to the other side of the plaza.

You will now be in a chamber with Ad Avis, who is performing a summong ritual.