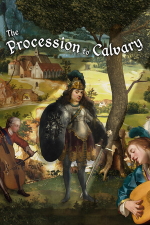 The Procession to Calvary

The Procession to Calvary is a Renaissance comedy adventure, and is the sequel to Four Last Things. This game continues the previous story, but takes place after the holy war between Immortal John and Heavenly Peter is over. There are 21 Steam Achievements, all documented in the walkthrough below. The next game by the same developer is The Preposterous Awesomeness of Everything.

Grab the scissors from the hanging corpse on the left. Head to the far right and jump off the cliff Whoopsie!. Reload your autosave, then go left and hit one of the grovelers Spank the Bishop, then talk to Immortal John until he gives you a quest.

After talking to the boatman, return right and talk each of the 3 knights waiting outside the field hospital. Talk to the cripple, who won't give you his crutches (based on the votes of the 3 knights). Return to the shore and pick up the discarded clothes to get some socks. Return the field hospital and use the scissors on the resting knight. Touch the reticent knight to pat him on the head. Give the socks to the reclining knight. Talk to the cripple again and ask for the crutches Abuse Democracy.

Return to the shore and give the oars to the boatman. Cut the rope with your sword.

Head up the path to the top left. Go just to the left and use your sword on the suspiciously hotspot-y post. Pick up the man on the wheel. Head along the path into the distance. Talk to the nude bowman until he shoots the apple, then go and pick it up. Return to the town and show the man on the wheel to the woman on the donkey, then use it on her cart. Give the apple to the donkey Duped!.

After you are allowed into the town, go to the left and talk to the ferryman. Talk to the merry townspeople, and you will end up talking to the magician. Ask him to teach you to walk on water, and he will ask for some purple berries.

Leave town and head right over the bridge. Grab some berries from the bush, then return left and enter town again. Talk to the magician and give him the berries Magician's Assistant #1. Return left and give the boat pass to the ferryman.

Enter the Basilica. After the conversation, touch the tiny lion on the floor Who's a good boy!?. Punch the scholar reading the book on the left 7 times Brawler.

Return over the river by talking to the ferryman. Go through the door at the bottom right into the theater. Talk to the tall lass about the talent show. Go back outside and go through the door closest to the ferryman to find some dressmakers. Talk to them and ask them to make you a dress. Next talk to the sad man to the left, and ask him to write you a song (he will give you some music).

Go through the doorway in the background, then go to the far left and jump into the water. Once you awaken, quickly stab the fish with your sword, then pick it up. Return to town and go to the dressmakers again. Pick up the dress, then return to the theater. Examine the music in your inventory, then talk to the tall lass and enter the talent contest (singing these lyrics):

You will win the champion's necklace as a prize Win the Talent Show.

Back out in the town square, go through the door behind the empty tables. Head left, then ask the snuff-sniffing snob for a bump of snuff. Leave town and head up the hill to the left. Talk to the street magician, who is now up on a cross. Head along the path in the distance. Give the snuff to the metrognome, then pick up the pliers. Return towards town and go over the bridge to the right. Pick up the pile of bones.

Return left and up the hill. Give the pliers and bones to the street magician Magician's Assistant #2. Go back towards town and over the bridge again. Talk to the man behind the boulder on the right. Get him to push, then also push the boulder and he will escape from the cave Magician's Assistant #3. Enter the cave and pick up the supple young boy.

Return to the town and go through the door behind the empty table. Head right into the library. Return your book to the library, and you will get an ornate crown King for a Day.

Leave the library, then go through the left door. Ask the snuff-snuffing snob for a treasure map. Look at the map in your inventory, then go back outside. Enter the largest door from the town square to find a gallery. Examine the painting of buildings and sky to the left of the back room door. Click on the position marked by the X on your map to reveal a safe. Look at the safe, but it is locked.

Return outside and leave town, then go right and enter the cave. Take some bugs from the barrel full of bugs. Leave the cave again, and go left, then up the hill. Give the bugs to the skunk Make a Friend. Go back into the town, then through the door behind the empty table. Go left, then poke the skunk, and a window will be opened to the right. Go outside and look in through this window, then take the key. Go back to the gallery and use the key on the safe Treasure Hunter. Take the treasure, which turns out to be a brooch with a missing amethyst.

Leave town and go right, then enter the cave and go through to the next room. Talk to the bird-man about the devil's riddle. Go back past town and up the hill to the left. Pick up a severed head. Return to the cave and put the severed head in the barrel full of bugs. Take the head back out again. Put the bug-eaten head back into the barrel, then take it out to get a skull. Place the skull on the satanic altar (where you found the sacrificial lamb earlier). Go right and talk to the bird-man again, telling him you have made a sacrifice Appease the Devil. Take a pearl, then return to town.

Go through the door behind the empty table. Give the pearl to the girl to receive her amethyst Swapsies. Put the amethyst in the brooch to fix it.

Go outside and talk to the ferryman to get back over the water. Enter the Basilica and give the necklace, boy, crown and brooch to the cardinals. Go through to the next room and approach Heavenly Peter, then save your game. There are two possible endings from this point.

Talk to him and select the option "Rich, you say...". Put away your sword. Now just talk or fart your way through the next scene The End #2.

Talk to him and select any of the aggressive options. Use your sword to kill Peter First Blood. After returning to Immortal John, walk around town and kill everyone you can find The End #3.

Start a new game. Go right and talk to Immortal John until he gives you a quest. After talking to the boatman, return right and kill the cripple (1/7) so you can take his crutches. Return to the shore and give the oars to the boatman. Cut the rope with your sword. Go up the hill and kill the nude bowman (2/7), the torturee (3/7) and the man tied to tree (4/7). Go back down the hill and right past the town. Look in the grave and poke the priest in the face, then kill the priest (5/7). Return to the front of the town and kill one of the gatekeepers (6/7). Inside the town, go left and kill the ferryman (7/7)Serial Killer.

Use the unmanned vessel to get across the river, then enter the Basilica. Kill one of the cardinals. Go through to the next room and approach Heavenly Peter. Try to kill him and you will be captured. Scream at everything in the next scene The End #1.