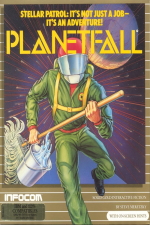 Planetfall is a classic text adventure game by Infocom. You have signed up to Stellar Patrol, but are currently ranked as a lowly Ensign Seventh Class, and have to survive your training. The series continues with the sequel, Stationfall.

Wait at Deck Nine until you hear an explosion, then immediately go west. Get in the webbing and wait for the pod to land. Get out of the webbing, grab the kit and open the door. Head up 5 times to reach a courtyard.

Drop the brush and the ID, then head north, northeast, and east 3 times to a corridor junction. Now go south 4 times to the machine shop. Go west and grab the laser, pliers, flask and bar, then drop the battery. Go east and put the flask under the spout. Go back to the junction (north 4 times).

Walk east twice to find Booth 2. Drop the laser and pliers, then go west and push the red button and the blue button. Head west, south and east, then take the box. Go west, north and east twice (back to Booth 2) and drop the box. Walk west twice then north, and search the crevice to find a key. Hold the magnetic bar over the key to get it. Drop the bar and head south, then west twice. Unlock the padlock, then get it, then drop both the padlock and the key. Open the door and head north. Drop the kit, then take the ladder. Walk south, east twice and north twice. Drop the ladder and open it, then put it over the rift. Walk north and west, open the drawer and get the cards. Go west and open the drawer to get another card. Head east twice, south 3 times, west and south. Get into bed and wait until you fall asleep.

Get out of bed and take everything, then go north, west and south. Get the canteen and open it. Slide the kitchen access card through the slot and go south. Put the canteen under the spout and push the button, then take the canteen. Go north and drop the kitchen access card, then head north, east twice, south 4 times and east. Search the robot, then turn it on. Now head northwest, north 3 times and east - the robot will enter. Go south and drop the lower card and the shuttle card. Walk north twice and slide the upper access card through the slot, then push the up button and wait until the door opens.

Walk south and northeast to the comm room, and note the color of the flashing light. Go back southwest and north, then press the down button and wait. Walk south, west and south 4 times, press the button of the same color as the light and get the flask. Go back to the comm room (north 4 times, east, north, slide card through slot, press up button, wait twice, south, northeast) and pour the fluid into the hole - a new colored light will start flashing. Repeat this whole process twice more to fix the room.

Walk southwest and north, then press the down button and wait. Drop the upper access card and flask here, then go fill your canteen (south, west 3 times, south, get the kitchen card and slide it through the slot, go south, put the canteen under the spout, press the button, get the canteen). Now go north and drop the kitchen access card again. Head north, east 3 times and south to the Lower Elevator. Get the lower access card and slide it through the slot, then press the down button. Drop the lower card and get the shuttle card, then wait for the doors to open. Head north, east, south, east and slide the shuttle card through the slot. Push the lever up and wait until you have reached a speed of 60. Push the lever down (twice) to start decelerating, then wait until you arrive at your next stop.

Turn on the machine and use it to get lots of information about the background story of the game (you may want to save, do this, and restore so you don't waste a lot of game time). Now head east and slide the card through the slot. Press the beige button to teleport to Booth 2 (where you left some stuff earlier). Slide the card again, then press the tan button to return to Booth 3. Take the pliers and the bedistor, then go west and north twice. Open the cube and remove the fused bedistor with your pliers. Drop the fused bedistor and the pliers, then put the good bedistor in the cube and close it.

Walk south and west twice, then down into the Repair Room. Wait for Floyd to arrive (if he is not here already), then tell him to go north. Tell him to get the fromitz board. Now go up, east, north. Open the panel and take the second board, then drop it. Put the shiny fromitz board in the socket and close the panel. Go back to the main lab (south, east, south twice, east) and open the Bio-Lock. Head southeast and east, and wait for Floyd to volunteer. Open the door and close it. Wait once, then open the door and close it again - you can now take the miniaturization card.

Go west, open the bio-lock, and go west, west, north, east. Slide the card and press the beige button to reach Booth 2. From there, head west 4 times, then south, get the kitchen card and slide it through the slot, then drop it. Go south, put the canteen under the spout, press the button and get the canteen. Go north twice, then east and south. Get into bed and wait until you fall asleep.

Head east and north twice, then look in the relay. Set your laser to 1 and fire it at the speck until it is vaporized. Now set the laser to 6 and head south. Repeatedly fire the laser at the microbe until it becomes quite hot, then throw the laser over the side. Walk south, west and north to the Lab Office.

Open the desk, then take and wear the gas mask. Push the red button, then open the door. Go west and open the lab door. Go west, west, open the bio-lock and go west into the Main Lab. Go southwest, west, south to the Cryo-Elevator, then push the button. Wait for the door to open, then go north to complete the game.