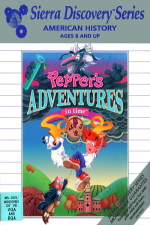 Pepper's Adventures in time is an educational adventure game by Sierra On-Line, similar to the earlier EcoQuest games. You play as a young girl named Pepper, who must solve a series of puzzles to restore the chaos brought about by Dr Fred's time machine.

Use the tap to fill Lockjaw's bowl, then get the gum from the path and give it to Lockjaw. Pick up the soft gum and use it on the drainpipe, then pick this up and connect it to the drainpipe on the side of the house. Touch the flowers in the flowerbed and talk to Mrs O'Brien. Try to climb up the drainpipe. As Lockjaw, search in the flowerbed to dig up a harness. Now as Pepper, pick up the harness and use it on Lockjaw. Climb up to the roof, and clean the window. Look through the window, then use the time machine to travel to 1764.

As Lockjaw, smell the bone, window sill, dog bed and dresser. Drink from the bowl, then eat the bone and dresser. Also eat the sweets and the key, and hide the bone and key in the dog bed. Bite the butler when he enters, then bite the dog bed to get the key again. Bite the clock to open the secret passage, then go through the passage. Move the shroud, then smell the hole and bite it, then head through and along the passages to the fire.

Talk to Ben then pick up the tomato from the garden and head east. Take the schematic from the printing press, and look at it in your inventory. Also grab the rubber stopped and magnet from the right. Return west and show Ben the schematic, then go east and south. Try to take the matches from the stove. Talk to Sally, then use the tomato on yourself, and Sally will heat the water in Ben's bath. After you talk to Ben again, go east and south. Open the sideboard on the left and take the recipe card, then go south.

After you travel through time again, talk to Ben in the lake. Pick up the tablecloth and use it on Pepper to scare Darcy. Now pick up the clothes and give them to Ben. Wait for Ben to come into the back room, then give him the string to receive a kite.

Now back in 1764, go south twice and talk to Richard. Try to take the key, and Richard will give you 3 proverbs. Give the first proverb to the woman on the bench here. Head east and into the bakery. Talk to the woman here, and give her the recipe card to get a jar of cabbage. Leave the bakery and go west and northwest. Knock on the pub door and give the man the second proverb. Use the jar of cabbage on the goat to empty it. Enter the post office and give the third proverb to the man on the right.

Head north and west to the backyard. Take the iron rod from the cabbage patch. Use your piece of tin with your empty jar, then fill the jar with water from the bath. Put the stopper in the jar and insert the iron rod. Now give the jar, kite, string, key and schematic to Ben.

Pick up the lever, fan, backscratcher, paddles and stepstool. Go inside to the east and use the stepstool on the ladder, then climb up. Open the window and open the birdcage.

As Pepper, pick up the letter. Go down, south and talk to Sally. Continue south 3 times then east and into the bakery. Talk to the woman and give her the fan, then leave again. Go west and look at the note on the tree, then take the note, look at the carving, press the knot, and take the hidden box. Use the box in your inventory and solve the puzzle to get some love letters. Use these in your inventory, then head west.

Talk to either of the guards, then show them the King's letter. Inside the shed, talk to Richard, then show him the love letters. Open the carpetbag in your inventory and give this to Richard.

Talk to Ben to get the kite, then go south 4 times and east. Enter the bakery and give your chocolate to the woman so she will make you some bonbons. Leave the bakery and head west 3 times. Give the bonbons to the guards, then use your kite on the river. In the backyard, sneak to the first bush, then to each of the other bushes and in through the window. Pick up the pencil and paper from the desk. Use the pencil on the paper to see the code for a safe. Use your pencil on the painting, then move the painting and open the safe (code is 5-30-75). Take the bag of money then close the safe and replace the painting. Use the armonica and you will be caught.

Hide in the closet. Use the pot of blue dye, then bite the butler. Use the Leyden jar on Pugh. Open the doors, and show the bag of money to Ben.