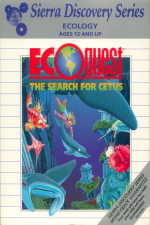 The Search for Cetus

EcoQuest: The Search for Cetus is the first of a series of two educational titles from Sierra On-Line. You play as Adam Greene, son of an ecologist who rescues a dolphin from a fishing net. After discovering that the dolphin is actually Delphineus, a messenger from the whale king Cetus. You then venture into their underwater kingdom to help save their environment. The series continues with EcoQuest 2: Lost Secret of the Rainforest.

Take a closer look at the seagull and take the rag and detergent, then use the detergent on the rag. Now use the rag on the gull to clean it. You will get the fertiliser solution from your Dad before he leaves. Look at the aquarium and use the fertiliser on it. Now take the water from next to the gerbil's cage and use it on the cage. Next go and pick up the mail sitting on the chair - it's your membership card. Pick up the envelope again to dispose of it. Also grab the empty soda can and put it in the recycle bin. Pick up your recycling bag from the floor. Now look at the computer screen, then at the blackboard (and look at the various parts of the diagram). Finally use the keypad and enter the code from your game manual to get through the door.

When he returns, go back to the treatment room and look at the mesh guards over the boat propellers. Open the lab bench under the blackboard and pick up the contents of the drawer. Get dressed in the scuba gear, then swim out to sea, towards the passing ship. After the kid loses his balloons, recycle as much of the rubbish in the water as you can, picking up an empty jar as well. Swim to the left, and then use your oxygen tanks to dive with the dolphin. Head down, then to get through the weeds go down, right and down.

In the courtyard, recycle all of the trash you see (until you get a message saying you have it all), and pick up the steel cage. Head into the temple on the right and take the bronze conch from the pedestal. Look at the wall to the left and solve the sliding-tile puzzle. Go back outside and use the conch with the statue, then you can take the bronze trident. Return to the temple and use the trident to press the 3 eyes on the right. Talk to the Oracle and answer her riddles by clicking on the man, then the fish, then the heart.

Leave the temple and swim to the Senatorial Chamber at the middle of the screen. Talk to the mask on the wall to introduce yourself. Now click on the segments of columns on the left side of the screen until you find one that does not change any others (you will get a message about this). Repeat on all nine sections to solve the puzzle and you will speak to Superfluous the mayor, who needs a new shell.

Leave the senatorial chambers and swim left to the Royal Gardens. Pick up all the rubbish again, then use your fertiliser solution on the whale statue. Talk to Demeter the lobster, who gives you a healing potion. As Demeter leaves, a shell falls to the ground. Pick it up, then head right. Now go to the Fish Apartments and clean up the rubbish, picking up the white cloth. Use this to clean the shell, then go back to the Senatorial Chamber and give the shell to Superfluous, who gives you a deputy badge. Go back outside (you will see the giant manta) and head back to the Fish Apartments.

Show your badge to the watchman to be allowed into the apartments. Help Narcissus the blowfish into his apartment, then out of the plastic bag, and he will give you some sea urchins. Now go to the middle apartment on the left to meet Epidermis. Talk to him, then use the sea urchins on the plants and he will give you a sharp shell. Swim to the middle apartment on the right and talk to Dr Hippocrates, then free him from a six-pack to get some tweezers (and the six-pack). Now go to the top right apartment. Pull the string in Prof Erroneous' mouth, then use the tweezers the retrieve the rest of the balloon. You will be rewarded with some screws. Recycle the bits of balloon, then head to the bottom apartment to meet Gregarious again. Swim up to meet the fisherman and talk to him about his propeller. Use the screws on the cage, then the cage on the propeller. After swimming back down, recycle all the rubbish around the apartments, and pick up the pump. Head into the top left apartment and recycle the bottle of bleach. Use the pump in the window to revive Olympia and receive a locket containing a poisonous spine. Now go back to the meeting place to receive the Mayor's golden mask. You will automatically go to meet with the Oracle again. Use your trident to press the 3 eyes and talk to the Oracle, then show her your mask. You will hear a prophecy (and receive it on a scroll).

Swim down to the open sea, then right toward a large stone head. Recycle all the rubbish, and pick up the mirror, then look into the ear to notice a flashlight fish. Swim off to the right and look at the sea anemone in the lower left. Head up through the hole to the upper left and open the chest. Now look at the skeleton and note the key at the base of the pike. Pull twice on the pike to release the key, then swim down after it and chase the red fish until it gets eaten by the anemone, which develops a bad case of indigestion. Head right and use your mirror to lure the octopus away so you can grab the silver wire. On the next screen to the right, take the fishing lure from around the steel pylon, and look in the rear of the sub to find a hammer and hacksaw. Use the trident on the toilet tank to retrieve the float. Attach the cable to the float, then the transmitter to the buoy to make a floating radio beacon. Now go back and use the fishing lure on the anemone to get the key. Go and use the closed jar on the octopus. Leave the screen and return to find the jar opened - take it and return to the head. Use the open jar on the ear to catch the flashlight fish. Head to the far right into a dark cave, and use the glowing jar to light your way. Toward the top right of the screen, gradually clear a blockage with your hands. Look at a sparkle of light closely, then use the oily rag to grease the lock. Use your key to open the box and find a chemical protection suit. Swim into the green-glowing area and attach your radio beacon to the barrel of toxic waste. Now swim through the hole on the far side of the cavern and use the trident to try to pry the door open. Cut yourself free of the net with the shell, but Del will be captured.

Go back through the caverns and try to pry the door open again. Go through the cabin, the look carefully at the harpoon rack. Follow the cable up and find Cetus trapped by the cable. Talk to him, then swim away and note his mouth opening and closing as he breathes. Enter his mouth at the appropriate time, then use your hacksaw to cut the barb off the harpoon. Swim out of the mouth, then look at the cable and pull the shaft of the harpoon free. Use Demeter's ointment to treat the wound, then follow Cetus to find Flesh-Eater. Swim into the lair when you can, and cut Del free using your sharp shell. Once outside again, use your poisonous spine on Flesh-Eater to complete the game.