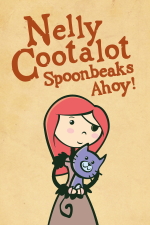 Nelly Cootalot: Spoonbeaks Ahoy! HD is a remake of an earlier freeware game from 2007, starring Nelly Cootalot, who also features in the subsequent adventure Nelly Cootalot: The Fowl Fleet. In this game, Nelly is charged by the spirit of a dead buccaneer to located a missing fleet of birds. There are 12 Steam Achievements, all documented in the walkthrough below.

Enter The Barnacle and talk to Captain Rehab about everything. Also talk to Barman Friday, then show him your spade (1/6), then take the map. Use the map to travel.

Talk to Blind Jimmy Thimble, then show him your spade (2/6). Search the box on the ground to get a heavy rock. Use the map to travel again.

Enter Bjorn & Olafssen. Talk to the men about everything, then shown them your spade (3/6) before leaving to the right.

Next go to The Store of Babylon. Talk to Baron Widebeard. Talk to Madame Leatherette, then show her your spade (4/6). Wait for the Baron to start reading a line from his book, them immediately grab the ink well from his table. Search the bargain bin on the right to find a book, then leave the shop.

Look through the narrow window on the left, and examine the safe.

Head inside. Talk to Captain Rehab and Barman Friday about everything again. Go back outside and look at the graffiti on the side of the building.

Enter Bjorn & Olafssen and examine the tattoo stand, then select the top right tattoo. Talk to Coot about everything new, then leave again.

Examine the lone grave on the left, then use your spade on it to find a phrase book. Examine this in your inventory to see a hidden message inside the cover.

Enter Bjorn & Olafssen and use the phrase book on Coot.

Examine the graffiti again, then crack the code by rearranging the alphabet into the order of letters shown on the left. Click the Read button Want a Cracker?. Enter The Barnacle and show your tattoo to Barman Friday - you get an achievement for selecting the correct tattoo on your first attempt Ink-redibly Clever. Show your tattoo to Captain Rehab and talk to him about everything to receive a cat burglar. Now you can show him your spade (6/6) Can They Dig It?.

Talk to Barman Friday again and order a drink. Return this and order another one. Keep doing this until you have selected them all Day Drinker. Make sure you end up with the Cat Guts in your possession.

Look through the window again, and use your ink on the fish tank.

Show your pass to Blind Jimmy Thimble and talk to him about it to be given access to Saul Island Intrepid Explorer. Head along the path.

Go inside and put a daalder in the donation box on the right. Head right into the gallery and take the moustache, as well as a postcard from the box on the wall.

Give your remaining daalder to Stibble Bellwise at the Hook-a-Duck stand. Say you are ready to play, then pick up the hook. You won't be able to hook any ducks. After the game ends, complain that the game is rigged, and you will get your daalder back. Give it to Stibble Bellwise again and play another game. This time combine the hook and iHook in your inventory before playing, and catch 8 ducks to win the major prize Shouted Word. Give the record back to Stibble Bellwise and play again, this time catching 7 ducks to receive a rainbow scarf.

Combine the rainbow scarf and underthings, then add the four leaf clover. Give the completed flag to the Leprechaun. After the cutscene, pick up the orange and try to throw it at El Mono. Pick it up again. Use your heavy rock on the pipe coming out of the furnace, then use the orange on the pipe. Now head through the doorway.

Walk to the left and into the other doorway to be trapped. When talking to Baron Widebeard, select these options:

Pick up the loose stones from the floor (you will need to move to the side to be able to see them). Use the stones on the bell, then quickly use the crank so the Baron doesn't hear it. Now use the control panel to move the magnet directly above Baron Widebeard. By moving the lever into a specific position and then pressing the rectangular button, you will end up moving the magnet around. If the lever positions are numbered 1 to 4 from top to bottom, move it to the far top right by repeating having it in position 3, then use positions 1, 1, 2, 1. Once in position, press the red magnet button Rescuer.

For getting all of the other achievements, you will also get the final one Timewaster.