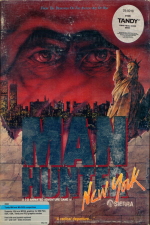 Manhunter: New York is the first of a pair of games by Sierra On-Line where you take the role of a nameless Manhunter; a human given access to special technology and a job blurring the line between police officer and bounty hunter. This game takes place over 4 days and each day begins with a new target provided to you by an Orb. There are several arcade-like sequences within the game. The series continues with Manhunter 2: San Francisco.

An orb enters and asks you to investigate an explosion at Bellevue Hospital. Watch where the tracker goes on the MAD - you will need to travel to each of these locations.

Start by heading to the hospital. Go around the side and through the hole in the wall. Look at the dead body of Reno Davis, then look him up in the Info section of the MAD.

Now go to the Flatbush Bar. Try to play the video game, but some men will drag you away. Throw daggers between each of the fingers to be allowed to play the game. Draw yourself a copy of the maze, particularly noting the location of the magic squares (you will need this info shortly). Complete the game by going through the maze in the shortest possible path. You will only stand on 3 magic squares, and only 3 dolls will be hit in the display above - note which 3 dolls are hit.

Leave the bar and go to the restrooms at Prospect Park. Enter the lady's toilets (on the left), and go to the last toilet. Flush it 3 times to be pulled down into the sewers. Now use the maze you drew to make your way through the sewers, being sure to pick up all 12 keycards (in the locations of the magic squares from the video game). Look at the jetty when you finish the maze, and pick up the medallion. Exit the cave and travel to Coney Island.

Test your skill at the games on the left side of the park. Play the Kewpie Doll game and knock down the 3 dolls from the video game (3rd doll top row, 2nd doll middle row and 3th doll bottom row). Note that you also must hit them in that order. Show your medallion and the guy will give you a data card. You will automatically use the card, and the orb will instruct you to return home. You don't have any suspects yet (apart from the first name "Phil" that you got from the data card), so don't input any names.

Today you are asked to investigate a missing repair droid at Grand Central Station. Track all 3 suspects using your MAD.

Travel to the terminal and note where the robot is working.

Now head to the Wretched Express Nightclub. You can't get in past the bouncer, so head around to the alley on the left. Jump and duck past 3 thugs in the alley, first dodging 2 sets of knives, then molotov cocktails, and finally gunshots (just watch the direction the guy's arm moves to predict whether to jump or duck). You will be thrown into the nightclub. Take a closer look at the person in the brown robe on the left and she will drop a keycard. Quickly pick this up before you are tossed out by the bouncer.

Next head to Central Park. Read the sign and note what the men say - don't get "your goose cooked". Review the path the suspect took through the park using your MAD, then follow his route to avoid the land mines. Start by heading between the 2 trees on the far right of the screen, then head just left of the red tree on the left of the path. Follow the path to the base of the tree on the right, then veer off to the left between the blue and pink trees. Head beneath the tall pink tree with the shadow on the right, then go to the left in the distance between the pink and green bushes - take the crowbar you find here, then back up one screen. Now go slightly left between the blue bush and the pink tree. Head right just along the near edge of the lake, and finally head between the large pink and small purple bushes on the left. There are several things to note about the dead body here - he was trying to write the killer's name. Given the start of his writing and the clues from before, the name you want is Phil Cook. The body belongs to H Osborne, and there is a reference to Anna.

Travel to the Vend-o-Deli and look at the notice board where the dead guy travelled earlier. The only note from anyone starting with H is from Harvey. Look up Harvey Osborne on your MAD.

Travel to Harvey's apartment (150 West 82nd). Go inside and press the button to reveal a dead woman - Anna Osborne. Press the button again to close the door, then look at the shopping bag and take the key.

Finally go to the museum. Review the path the suspect took through here using your MAD. Go right and use your key to unlock the door, then head inside. Go upstairs to the left, then through the door to the right at the end of the hallway (use a keycard). Go forward through another 3 doors with keycards, then climb a staircase straight ahead. Open the door directly in front of you, then go through another 3 doors before heading up some stairs to the right. Open the door immediately to your right and go through, then head to the end of the hallway and through the door to the right. Follow the corridors through an open door and 2 more requiring keycards, then use your last keycard to open the door directly ahead. Use your crowbar to try to force the wooden door, then quickly use your medallion to tame the dragon - it will help you by opening the door. Go through this and the next door to find a dead body. Look at the body to see a tattoo (note the placement of the white dots) and take Module B. Now look at the map on the wall before leaving. The orb will take over and ask for suspects again - enter Phil Cook, Harvey Osborne and Anna Osborne.

There is a dead orb at the cemetery. Watch where the single suspect is tracked on your MAD.

Head to the cemetery. Enter the grounds and look at the names on the gravestones, in particularly the name on the gravestone where the orb is now planted - Tim Jones. Try to look these people up in the MAD, but they are not there because they are dead. Remember Reno Davis, the manhunter from the beginning of the game? He died, but remained in the system and was "Transferred to Chicago". This really means he was killed by the orbs and the murder was covered up.

Travel next to the church. Go inside and over to the set of candles on the left. Light the candles according to the white dots from the tattoo earlier (1st candle top row, 3rd candle middle row, 4th candle bottom row) and a compartment will open. Note the symbols here, then take Module A. Extinguish the candles and also note the symbol on the outside of the compartment.

Go next to the pawn shop. Head up to the counter, then pick the symbols you saw in the church - the cross, the star and the pan pipes. You will be dropped through a trapdoor into another sewer. Approach the first picture of a winter scene and note the upside-down numbers formed by the shadows. Enter the code 41 to open the door and head through. The next picture represents Halloween, so enter the date 1031 to progress. The third picture has 3 sections - the left arrow, two 3's and the right arrow - giving the code 264. Enter this to continue. At the final picture, count the number of branches on each of the dead stems, giving 425. Enter this to find the body of the orb-killer on the ground. The name on the lapel of the jacket is Harry, and you know the surname is Jones from the gravestone. Go around the corner and fight Phil Cook (same method as in the alley earlier). Pick up the piece of paper he drops when you punch him. Go up the ladder to exit.

Look up Harry Jones on the MAD and travel to his house (21 Pearl St). Go inside and look at the radio on the left. Use your crowbar to destroy it, and take Module C. Leave the house.

Travel to the theater and go into the room on the right. Remove the left picture from the wall, then enter the code 843769 (from Phil's note). Take another note from the safe, then leave.

Look up Phil Cook on the MAD, then travel to the Empire State Building, where he lives. Go inside and look at the computer. Turn it on and select continue, then enter the password UCUCC from the second note. Select Alpha Security, and assign the robots to hall security and orb protection. Select Gamma Security, and assign the robots to ground duty. Leave Beta and Delta alone. Try to travel, and give the orb the new suspect name of Harry Jones.

An orb enters and asks you to track down a computer hacker, after which time you will be transferred to Chicago, ie. killed. When the screen with the 3 I/O ports comes up, watch the first input signal from the bottom port and track it. You will eventually discover that the hacker is yourself.

Head back to the hospital, and you can now go through the hole in the right wall, although you will be chased and thrown into a cell with lots of bones. Look at the grill and use your crowbar to remove it. Watch until the guard, orb and robot all leave the room, then look at the machine and take Module D from the slot. Move the switch up and get on the conveyor belt to reach the next room. Here you must climb up and down the wires and jump across to the window, while avoiding the electricity.

Travel again to the terminal, and look at the windows on the lower left of the screen. Use the crowbar to break in, then climb through and enter the ship. Insert each of the 4 modules, then slide the top left button to turn on the power. Next press the middle square button to close the hatch, then the right one to open the launch hatch and the left one to take off. In the maze that follows, go south to start with, then take the southeast passage, and take the second branch to the north to reach the exit.

Back in your cockpit, press the button beneath the display, slide the top right button, and look at the screen. You need to fly around New York and bomb the 4 sites mentioned on Phil's computer - Grand Central Terminal, Bellevue Hospital, Empire State Building and Statue of Liberty (a small purple structure by itself on an island far to the south). While doing this, you must also keep dodging Phil. Once you succeed, the game is over.