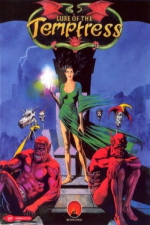 Lure of the Temptress

Lure of the Temptress is a 3rd person point-and-click adventure from Revolution Software, who would go on to create the Broken Sword series of games. You play as Diermot, a man captured by an orc-like race called the Skorl and thrown in prison. You must escape your cell, then work out a way to liberate your people from the evil sorceress Selena, who controls the Skorl.

Try to pick up the torch and it will fall and start a fire. Quickly head to the top left of your cell, then when the guard comes in, sneak behind him and out through the door. Close and lock the door behind you, then head through the other doorway. Pick up the knife and the green bottle. Use the knife to open the sack, then look at it to find a groat.

Go east and talk to the serf. Use your knife to get the leather bond and free Ratpouch. Head south and look at the barrel to notice a tap on its front. Use the bottle on the tap to fill it with alcohol, then head west. Talk to the prisoner, then give him the bottle and he will give you information before he dies. Try to push the bricks over on the right, but you are too weak. Tell Ratpouch to push them and you will escape.

Head west, north, west, south twice, west, north, west, south twice and west to find Smithy Street. Wait here for a man in a green coat (Mallin), and talk to him to get a metal bar. Go through the doorway (northwest) to find the forge. Talk to Luthern the blacksmith about Wulf, then pick up the tinderbox from the floor. Now leave the forge, and go east twice, north, and into the village shop. Give the metal bar to the shopkeeper and you will receive money and a gem.

Leave the shop, and head east and south. Open the door to the left and go inside the tavern. Talk to Nellie behind the bar, and give her the gem in exchange for a flask. Talk to Morkus at the table; bribe him then talk to him again to learn about Goewin.

Leave the tavern and find Luthern (either walking around town or at the forge). Talk to him, and give him the flask; he will drink the alcohol inside and give it back empty. Return to outside the tavern and talk to Grub, who is sitting next to the well. He will give you a lockpick and tell you to find Taidgh the magician.

Walk north and west twice, then open the door and enter the pub. Talk to Edwina, who is sitting by the fire, and you will get a diary. Leave the pub and go east to the marketplace. Look at the closed door. Try to open the door, then try to use the lockpick but nothing happens. Give the lockpick to Ratpouch, then tell him to use the lockpick on the lock. Open the door and head inside. Examine the diary, then look at the apparatus. Use the tinderbox on the oil burner, then use the flask on the tap (right of the apparatus). Exit the house before you are discovered.

Drink the flask and you will transform into Selena. Head north, and open the door. Enter town hall and talk to one of the Skorl's to have Goewin released. Leave town hall and go east twice, then enter the apothecary. Talk to Goewin, then go outside and come back in and you will transform back into your normal form. Talk to Goewin twice more, then leave. Find Mallin again and talk to him to be given a book. Now head to Blackfriar's Row (east of the marketplace). Look at the poster on the wall, which mentions a stolen book. Head inside and talk to Brother Toby (if he is not there, he will come back soon). Give him the book and you will receive a statuette. Talk to him twice more and you will learn about a charm spell to cast on a dragon for help in defeating Selena.

Leave the church, then go north, east, and into the apothecary. Talk to Goewin and ask for the infusion of Houndstooth, Cowbane and Elecampane. She is out of Cowbane, so go outside. Head west 3 times and south twice, then get some cowbane from the flowerbed (outside the forge). Return north twice and east 3 times, then inside again. Give the Cowbane to Goewin and wait while she makes the spell. Talk to her until she says the spell is ready, and she will give it to you.

Go outside, and walk west 3 times then south. Open the door and enter the pub. Talk to Ultar (the man at the left table) twice to learn the gargoyles' names. Leave the pub and head north. Talk to one of the gargoyles, but you won't be let in because you are a man. Go east 3 times and into the apothecary. Talk to Goewin, who will help you. Return west 3 times and talk to Goewin again. Go through the Weregate into the cave.

Go west and use the potion on the dragon. Talk to the dragon and you will receive the Eye of Gethryn. Go east 3 times, then pull the left skull and continue east. Pull another left skull and go east and south to return to town.

Go to the marketplace (south, east) and wait for Mallin to walk past - talk to him to hear about a suspicious Skorl guard. Wait here and you will see a Skorl enter the shop. Look through the window and listen to the whole conversation, then head inside and talk to Ewan several times and you will be taken to the castle.

Head east up the stairs and look at the carcass on the table. Pick up the fat from the right of the carcass, and the tongs hanging nearby. Talk to the boy and say you are here for Selena; get him to send his master to see someone in the cellar. Go west again and look at the top cask to the bottom left of the screen. Use the tongs on the bung and wine will start pouring out. Hide behind a pillar in the top right and wait for the Skorl to arrive. Once he starts drinking the wine, sneak past and go east twice, north and east twice more.

Use the fat on the lever, and wait for the boy to enter the room. Talk to him and tell him to pull the lever; while he does this, use the winch to lower the drawbridge. Head west 3 times and go upstairs, then save your game. Continue east and through the doorway and kill the beast, then go west to complete the game.