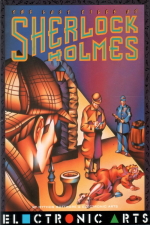 The Lost Files of Sherlock Holmes

The Case of the Serrated Scalpel

Just open the door here and leave for now.

Pick up the cigarette butts (on the left near the crate), and the battered piece of paper. Take a look at the iron bar, handbag and hat, though you won't be allowed to take them with you. Now look at the body. First look at the corpse itself, then at the knife wounds and abrasions. Make sure you pick up a sample of the powdery residue. Talk to the Constable and Inspector Lestrade. Go through the door and take the spring (under the cupboard), the handwritten note on the flowers, and one of the flowers themselves. Talk to Henry Carruthers and Sheila Parker. Note the stain at the top of the door, and the locked chest of drawers. Look at the perfume bottle and then pick it up. To get out of the room, you'll have to give Henry the spring.

Go inside and use the powdery residue on your lab table. Put some sulfuric acid in the test tube (by using the powder on the tube), and then use the matches. Add the powder to the test tube. Finally, look at the analysis results in your inventory, to learn that the compound contains arsenic. As a second experiment, use the flower with your lab table. Use the flower on the microscope, and then light a match, before putting some petals from the flower in the flask. Go outside and leave, then come back and Wiggins will be here - talk to him to find the vendor of the flowers.

Look at the laundry basket, then pick up the sweater and look at it - Macassar oil again! Pick up the umbrella over near the back door, and find the brass key. Search the brass bed caps, but there is nothing inside.

Talk to Belle, and describe a man wearing Macassar oil in his hair. He is very tall, of uncertain weight, and has black hair. She remembers him, but can't really help. Ask her for some La Cote D'Azur perfume, and while she is out the back, ask the cleaning girl about the player (she'll tell you he smokes Senior Service cigarettes).

Go back to the alley and you will find that the body has been taken to SouthWark Morgue. Pick up the iron bar before leaving.

Talk to the Coroner, and have a look at Sarah's personal items. Ask Inspector Gregson if you can take them away, and he'll tell you to find Lestrade at the Yard.

Talk to the coroner again, then take the large key.

Use the key to get in through the backstage door, then use your brass key to open the top drawer and take the opera tickets from inside.

Talk to the Usher, and the Manager (Epstein), and give the opera tickets to the balcony usher. The only way to talk to Mrs Worthington is to show her the opera tickets. She will eventually tell you the name of the rugby player - James, who you will find at South Kensington Field. She will also give you a note so that you can search Anna's dressing room. Go downstairs and give the note to Mr Epstein. The first time you go into the dressing room, you will not be able to pick anything up, but Watson will tell you of a plan when you leave. Go back into the room and talk to Watson, before opening the drawers and removing the ring of keys.

Talk to the coach about the player you are looking for, then talk to James Sanders. When he asks for proof give him the perfume you got from the backstage room at the alley. He will tell you he is staying at Eaton Dormitory.

Talk to James again and he asks for proof of the death.

Ask the newspaper man for a paper, but he has sold out. Talk to Wiggins instead, who happily gives you one.

Give your newspaper to James, then talk to him about everything and you will learn of Antonio Caruso, and two more places to visit.

Talk to Wiggins and you will buy his gyroscope.

Use your gyroscope on the boy standing by himself. Give it to him to get some information, then after he leaves pick up his hat and look at it.

Talk to the counterman, and then to Watson, to formulate a plan. Look at the coat of arms on the wall, and Reginald will tell you about Lord Brumwell.

Talk first to the spectator, and pay him for info. Then talk to Nobby Charleton as suggested (you should try several times). Talk to the barman (particularly about the "man in yellow"), and finally to Jock Mahoney, who will tell you the whereabouts of Antonio.

Talk to Antonio to get Anna's address.

Ring the doorbell and use the knocker before using the ring of keys on the door. Pick up the two calling cards on the table, and visit the parlour to the right, before going upstairs. Talk to the housekeeper, who will try to get rid of you. Instead, get rid of her, by going downstairs, pushing the plant at the base of the stairs, and telling her about it. Move the statue, and pick up the diary concealed in the pedestal. Examine it to find out about the pendant. Also read the two calling cards you picked up earlier, then leave.

Talk to Mr Farthington several times about Anna, then leave.

Talk to Lesley, the flower girl, and show her your handwritten card from the dressing room. Pick up the wire basket from the barrel, and then use it on the barrel to get a cuff link, which you should examine carefully. Now enter the pub. Talk to the publican, then look at the pictures over the bar and the trophies around the room. To get any help, you have to play darts against each of the drunks (staggering, shouting, then dirty), and then the publican. Ask the publican about the young man, and the cuff link.

Talk to the chemist twice then to Richard, but he doesn't know anything useful.

Pick up the knife and the smock, and continue questioning until Lars tells you about the docks.

Talk to Old Sherman, then use the leash on Toby (you will automatically go to your next destination).

Upon arriving, you will be refused entry by the guard. Go to Scotland Yard and get permission, then return and give your permission to the guard. Now talk to Blackwood several times, then open the gate to leave.

Talk to Nigel Jaimeson about the pendant and you will also learn of a man named Hunt.

Talk to the receptionist, give her a business card, and leave again.

Talk to Constable Dugan, and learn about the most recent murder. Open the gates, and go left at the elephant cage. Note the shiny object, before going right, back past the elephant, to the murder scene. Examine the corpse, the broken leg and the slash wounds. Talk to the Inspector, then open the door and talk to Hollingston.

Look at the muddy boots, and the picture of Felix the cat (lion). Talk to Simon Kingsley, and get him to help you back at the cage.

Return to the lion cage, and pick up the shiny object, which ends up being a pocket watch. Open the watch, to discover a piece of paper. Read it, and return to the detective agency.

Look at the right-hand picture, and talk to the secretary. Pick up the typewriter to smash the door. After the cutscenes, return to the agency and open the broken door to enter the office. Move the chair and bookshelf. Use the piece of paper (with the combination) with the safe, and take the pendant. Examine it to find a folded letter. Read this letter, then move the chair back before leaving.

Use the bell pull and talk to the butler to get inside. Talk to Mrs Brumwell first, then open the door on the right and meet Lord Brumwell. After he leaves, move the left-hand Persian sword. Open the painting and then the unlocked safe. Take the small brass key and use it to unlock the double doors. Open the main doors and follow Lord Brumwell. You will end up back at 221B Baker Street again.

Open the small book on the night stand to find a bookmark (pawn ticket), which you should take and examine.

Go back to the pawn shop, and trade the ticket for some tarot cards, which you should examine, to find an ornate key.

Take the passageway on the left to the fortune teller. Move the large candle on the left. Unlock the desk drawer with the ornate key, and take the silver key, which unlocks the strong box. Open this and look inside, then take the parchment and look at it.

Use the iron bar on the door.