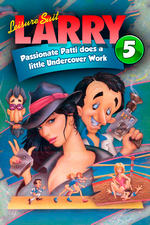 When you first get control, get the coffee and walk into the meeting room. After you are selected for the mission, get a drink from the watercooler and look at the award next to the plant. Enter the tape room and use the barrel of disinfectant. Turn on the 8-track player and select a song. Take the tapes next to the monitor at the bottom of the screen and run all three tapes through the degausser (on the right side of the long desk). Open the left drawer and take the battery charger, then exit the room. Go into the file room and take the AeroDork Gold Card from the imprinter. Open the top drawer of the right-most cabinet, take the files and look at each one to get some more items. Go back out to the office, plug the charger into the outlet and put the camera into the charger. When the camera is fully charged (look at it to make sure), unplug it and put a tape inside. Go out to the driveway and look at the statue. Get into the limousine to get taken to the airport.

Insert the AeroDork card into the ATM and select New York as your destination, making a note of the time. Enter the appropriate code from the flight schedule (it came with your game). Take the boarding pass and your card and enter the airport. Show your card to the security camera and enter the VIP lounge. When the Now Boarding sign is lit, insert the pass into the slot. On the plane, take the magazine from the seat in front of you and read it - you will soon fall asleep.

After Inspector Desmond hires you and takes you to the lab, watch both of the experiments, then go east. You will get some more info then see another experiment. Go through the door to be fitted with a locator. When you return to the lab, take the DataMan and both data tapes from the table and go west. Take the Hooter Shooter, look at it and put it on. Exit through the north door, then get in the limo and take the wine. Select the Reverse Biaz tape and insert it into the DataMan. Show the DataMan to the limo driver, and you are on your way.

Go out to the lobby and look at the overhead signs until you find the phone number for Checker Limo. Take the quarter from the collection canister for Jerry's Kids. Go to the phones, find the one that works and call the limo company, then head outside and get into the limo. Take the ledger book from the seat next to you and look at it. Show the driver the napkin and he'll take you to the cafe.

Walk behind one of the plants. Go in and talk to the maitre d' until he punches up a membership tape for you. Take the tape and run it through the music box. Insert your tape into the reader and enter the dining room. Sit down and wait for Michelle to walk in. Insert your tape into the reader and enter the Herman Hollerith Room. Turn the camera on, and talk to Michelle until she invites you to join her. Give her the ledger book, credit cards and money. When you are back in the lobby, turn off the camera and put a blank tape in. Call the limo company from the free phone, then go out and get in the limousine.

When you arrive back at the airport, get a ticket from the ATM (for Atlantic City) and go inside. Go west to the power outlet and recharge the camera. Head into the VIP lounge and board the plane.

Go into the lobby and look at the building directory (specifically the listing for des Rever Records). Talk to the sleeping guard. Show him the DataMan before he falls asleep again, and he will call the elevator for you. When you reach the office, take the gold record hanging over the stereo. Put the record on the stereo and play it forward and backward at both 33 and 78. Take the record and look at the studio window. Go into the studio and play the synthesizer. Play anything on the first two takes, and the 3rd will happen automatically. When you join Reverse Biaz in the control room, give him the bottle and he will get drunk and give you the cassette tape. When you return to the limo, take the Reverse Biaz tape out of the DataMan and put the K-RAP tape in. Show the DataMan to the driver.

Go out to the lobby and look at the signs to find the phone number for Tramp Limo. Go to the slot machines and pull the handle of each one until you find the one that gives you a quarter. Call the limo company with one of the phones, then go outside and get into it, showing the matchbook to the driver.

Outside the casino, talk to the woman and play the guessing game. Go inside and play a video poker machine until you have at least $525. Go into the showroom, pay the bouncer, sit down and look at Jennifer Jiggle. Go outside and follow the boardwalk until you get to Ivana Skates. Go in, rent a pair of skates and leave your camera as a deposit. Go out, put on the skates and skate west on the boardwalk. When you see Lana, collide with her and talk to her until she tells you to come to the mud wrestling. Return your skates to Ivana and get your camera back. Go back to the showroom and pay the bouncer to participate. When you sit down, turn on the camera. When you get into the ring, click the hand icon as fast as you can on all the body parts that appear on the screen. After you wrestle Lana to the floor and return to the casino entrance, talk to the doorman, who will call the limo. Get into the limousine.

When you reach the airport, get a ticket (for Miami) and go inside. Turn off the camera and put in a blank tape, then recharge the camera at the powerpoint. Go into the VIP lounge and board the plane.

Go into the building, then look at your DataMan and use the code to unlock the door and get into the office. Take the letter opener from the desk. Search the base of the plant and take the key, then use it to unlock the desk drawer. Look in the drawer and make a note of the number on the blue stickum. Take the file folder from the drawer and look in it, then photocopy the contents. Return the folder to the drawer, the letter opener to the desk and the key to the plant. Go into the bathroom and use the shower. When the shower reaches the studio level, take the clothes from the rack. Go to Studio B (to the right) and use the code from the desk to unlock the door. Go into the control room and take a tape from the back rack. Put the tape on the recorder next to the window. Use the control panel until you bring up the sound from both Studio A and Control Room A and start recording. When PC Hammer blocks the door, stop the recording, rewind and take the tape. Use the control panel and sing into the microphone. When the window breaks, you will automatically get your own clothes back and return to the limousine. You will automatically head back to FBI headquarters.

When your plane lands, go to the lobby and take the quarters from the vending machine. Look at the overhead signs until you find the phone numbers for North Beach Limo and Just Green Cards. Go to the phones and call both numbers. Go outside, take the green card from the wastebasket and get into the limousine. Look at the business card and show it to the driver.

When you reach the dentist's office, go up the stairs and go in. Knock on the receptionists window until she asks you a series of questions. Give her the following answers: yes, yes, no, no, yes, yes, yes, yes, yes, yes, no, no, no. After she gives you a delayed appointment, take the doily from the table and wrap it around your head. Knock on the window again and you're in. When Chi Chi starts examining your teeth, look at her and turn on the camera. Attempt to unbutton Chi Chi's blouse until you are successful. Talk to Chi Chi until she reveals that she is an alien. Give the green card to Chi Chi. When you are done, go back into the reception area, turn off your camera, and use the telephone to call the limo company. Go outside and get into the limo.

When you reach the airport, get a ticket (back to Los Angeles) and go inside. Go into the VIP lounge and board the plane. you will soon fall asleep and switch to Patti for a recap of her mission.

When the stewardess takes you to the cockpit, operate the controls until you find the autopilot. After you land the plane and talk to the president, you will switch to Patti in the White House.

After you are reunited, you will find out who Mr. Bigg really is and he will pull out a gun. Use the Hooter Shooter on him to complete the game.