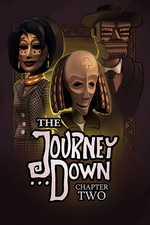 The Journey Down Chapter 2

Talk to Joe and Lina, then go down to the right and talk to Kito. Take the screwdriver from the toolbox and the duct tape hanging from the chair. Use the screwdriver to remove the compass from the dashboard. Return up to the deck and give the compass to Joe - now you need a map. Look at the sign on the ship to see it is named Biko. Touch the wires, then repair them with the duct tape. Go through the door to the cabin and press the button to turn on the lights. Talk to Gimbo. Take the spring, then examine the sink on the left.

Go back outside, then climb the steps. Examine the door and the porthole, then use your screwdriver on the porthole to remove the glass. Now use your spring to get the key and unlock the door with it. Search the drawer to get a navigation book (which will be very handy throughout the rest of the game). Go back to Joe and show him this book.

Talk to Kito 3 times and you will be free. Pick up the ball and chain from the right, then use it on the window. Use it again 3 times to make a hole in the wall, then head through. Look at the carts to see that there is a pickaxe in the bottom left one, but you can't reach it. Try using the lever on the right - you need to prop it somehow. Return to the cell and examine the skeleton to get its hand. Go back out to the prison yard and use the skeleton hand on the lever. Now you need to move the carts around using the buttons:

Now you can take the pickaxe from the cart. Return to the cell and use the pickaxe on Kito's chains. Use it again on the grate in the floor, then climb down.

Search the dumpster to get a can of lobster. Leave the alley and you will end up with a matchbook. Examine the newspaper rack several times, then break it with your pickaxe and take some newspapers. Go left, then to the end of the road to see the Biko. Continue into the dark alley in the corner and take a packet of nachos from the crate. Talk to Moe and Vince about everything. Put your newspapers in the barrel, then light them with your match. Talk to Moe again and you will get some new clothes.

Leave the alley and go to the lighthouse to the far left. Head inside and talk to Morten about everything. Pick up the boltcutters from the floor, and take the model ship from over the fireplace. Return to the main street of town and go up the steps to the Maitre D. Talk to him, but he won't let you inside. Use your pickaxe on the wire box just to the right of the steps, then use your boltcutters on the wires inside. Talk to the Maitre D again, who is still unhelpful and mentions he is not aware of a repairman coming to fix the lights. Go to the right and examine the matchbook in your inventory to see a phone number. Use the phone booth and dial 634-000, saying that you are management. Return to the Maitre D and you will end up with the lamp.

Return to the alley where you started this section, by going left from the phone booth. Enter Arnie's and talk to the guys at the table, then to the bartender. Examine the almanac on the wall and you will take it. Examine the radio and see that it is tuned to 96.9, then head outside again. Go back to the lighthouse and head up the stairs. Examine the radio to see it is transmitting at 96.9. Use your lamp on the broken lantern up here, and the lighthouse will be shining again. Go back down the stairs and Morten will tell you he still needs blueprints. Use your can on the teapot over the fire. Return to Arnie's and give the can to Gimbo. Go to the lighthouse again and give the navigation book to Morten - the lighthouse is working again. Go to Arnie's to find that the bartender is left. Climb into the food shaft.

Examine the back door of the club, then talk to the sailor. Enter Arnie's and talk to the bartender, then examine the sleeping sailors and pick up the empty bottle. Leave the alley, then enter the building across the street. Talk to Andiswa, who is the Mayor's secretary. Look at the map on the wall and examine all of the locations on it. Head out to the lighthouse and talk to Morten about everything. Return to Andiswa and talk to her again, then give her the almanac. Use her terminal and search for "expedition" to learn about the former chief of police, Leroy McIgbo. Use the phone booth out on the street, and examine the phone book. Search for McIgbo, then dial 510-842.

Look at the locked door on the right, then at the window above. Examine the tow truck to see the key is missing. Use your boltcutters on the gate straight ahead, then open it and go through. Examine the power box and set each knob to the position that gives maximum power:

Now press the small button beneath the meter and power will be restored to the mill. Use the control panel and watch what happens with the large crane arm. Look in the key box and you will take some keys. Go outside and use these on the truck to release the police car. Back inside again, use the control panel once more. Turn the hand-wheel on the left, before using the control panel again. Climb up the steps on the right.

In the office, search all 12 of the drawers until the safe is revealed. Try pressing the buttons in a game of Mastermind, until you work out the correct combination is 4571.

Enter Arnie's bar and talk to the bartender and the sad sailor. Go outside and out to the main street. Talk to the suspicious man, then talk to the man in the truck. Enter the Mayor's office on the right and talk to Andiswa. Return outside, then go left and approach the cinema. Talk to the couple standing outside. Talk to the cashier, then examine the popcorn machine. Go to the dark alley and talk to Moe and Vince, who will give you corn in exchange for alcohol and cigars.

Go to the alley outside Arnie's and give your nachos to the pigeon. Pick up the plunger, then head inside. Use the plunger on the drain, then use your empty bottle on the drain to half fill it with waste from the bar. Make sure you pick up the plunger again, as you will need it later. Go out to the lighthouse and fill your bottle from the teapot over the fire. Next head back to the Mayor's office and take some cigars from the box on the left. Go back to the alley and give the cigars and alcohol to Moe, then open the crate and take the corn. Head back to the cinema and put your corn in the popcorn machine, then take your free movie tickets. Return to Arnie's bar and give the movie tickets to the sad sailor, in exchange for his video cassette.

Go to the harbor and enter the large building which is the train station - there are troops blocking your path. Return to Arnie's and examine the radio. Adjust the frequency until you find the public band at 99.4. Go to the lighthouse and head upstairs, then examine the radio there. Remove the current record by pressing the lit button. Now adjust the transmitting frequency to 99.4. Press the middle button to send a coded message to the troops.

Go to the train station and examine the crates, then go through the doorway at the back of the hall. Search the junk pile on the left to get an old oil can. Look down from the end of the platform and talk to Kito. Try using the elevator, but it is pitch black at the top and you need to find a light source. Go to the lighthouse and try to use the doohickey, but Merton will stop you. Climb up the stairs and try to use the reel for the pulley. Use your oil can on the reel, then attach the model ship to the pulley before using the reel. Go back downstairs and use the doohickey. Pull the lever so the indicator stops exactly at south-east. Go back to the train station and up in the elevator, and your airplane will end up in the harbor.

Go to the alley outside Arnie's and through the back entrance, then you will automatically go up in the elevator into Club Temba. Look at the door with the keypad and try combinations of dirty keys until you get the correct combination of 851. Go inside and read the note on the wall, then look at the video storage. Use your video cassette on the video storage to automatically fool the guard. Go back out and examine the large doors to realize there is a guard on the other side. Examine the window, then use your plunger on it and climb outside. When you reach the black triangle on the wall, knock it in, until you can climb into the vault. Pick up the book.

Talk to Lina, then look at the ate. Look at the book and the clock on the table - it is 10am. Search the tent to find a machete. Walk up the beach and talk to Kito. Examine the runes on the pillars behind him. Use your machete on the jungle, then click on the larger plants until you discover a path. Look at the large door, and adjust the 4 columns to match the patterns shown in the book on the table:

Now press the button on the stone to the left here and one of the large runes on the columns above will be depressed - this is the one that is currently lined up with the swirl rune in the ground. Press the swirl rune in the ground, then press the button on the stone again, and the next large rune will be depressed. Repeat this until all 6 large runes are depressed. Look at the new raised pedestal in the middle of the runes and take the golden idol.

Go back to the gate and talk to Lina, then use your idol on the figure in the gate.