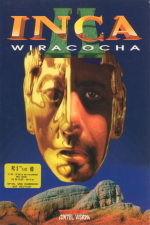 Inca 2: Nations of Immortality is the sequel to the earlier game Inca, again developed by Coktel Vision. You begin the game as El Dorado's son Atahualpa, but then continue the game reprising your role as El Dorado himself, after your son sparks a new war in space between the Incas and Spaniards. As in the previous game, there are both adventure and action elements.

When you begin, you are offered the choice of two challenges. To select, go to the Gate of Wisdom (puzzle) or the Gate of the Force (arcade).

Gate of the Force

In this arcade sequence you must shoot at least 26 statutes (out of approximately 50).

Pick up the cocoa leaves and the post. Look right and use the post over the gate entrance. Look to the left and pick up a rock, then throw it at the guard; quickly hide behind the bushes to the left. Assuming the guard didn't see you he will walk over to the entrance; quickly click on the rope to take out the guard.

There are now 2 space battles; destroy the spikes with relatively weak weapons (F1 or F2), then destroy the base with something stronger (F3) before taking out the remaining spikes.

Turn left to find the control screen and enter any 3-digit code to deactivate the security. Go through to the cargo hold and pick up a crowbar from the left, then use this to open the crate of vodka. Take a bottle of vodka. Turn left again and open the click on the hose on the left, then pour in the vodka. Go back out to the main area and approach the throttle lever, moving it to the "On" position. Back at the control screen, you can now press one of the buttons at the bottom to man a turret (either 1 or 2).

Use your weapons against the spikes, but you will eventually be overcome. As El Dorado, fire your grappling hook (F5) to recapture your friend's ship.

Once you are re-united, you must then follow the instructions exactly as given:

When you are in control of the antenna, just use the controls to move the gray target until it is in the middle of the display.

Pick up the crowbar, then board the train and take the lubricator and the leather strap. Go back outside and use the lubricator on the pulley, then use the crowbar on it. Board the train again and use the crowbar on the peg. Turn the inlet wheel, press the ignition button, then pull the lever. When the attack begins, just click on the flashing orange segment to man the guns in an appropriate direction, and shoot at the incoming enemies until the timer runs down.

Look right and zoom in on the chest, then pick up the shaver, mallet, bottle of mercury, ballasted thread and key. Now look at the safe to the left. Use your mercury on the dials to get rid of the rust. Back out and look further to the left, using the shaver on the rope around the cabinet. Look at the drawer and try to open it with the key, then rub the key in the sand and try again. Read the file inside to see the 3-digit code to open the safe. Go back to the safe and open it.

After the cutscene, turn on the device, then put your crystal into the memory slot. Select to travel to either planet A or planet B (the next part will be the same, but the order of the two subsequent planets will change based on your selection here).

Use your cannon and missiles on the first enemies, then you can choose to continue fighting now or go straight to the planets. If you continue fighting, the battle will be difficult and will require taking out bases with stronger weapons (F3), however it will eventually make the final fight easier.

Examine the stems on the left; pick up the palm leaf and use it on the footprints in the sand. Now look up and go towards the mangrove. Pick up an oyster and put it on the flat rock. Use your mallet on the oyster and take the pearl - an ape will appear. Get another oyster and throw it at the ape. Now you can go to the nest and use your pearl on the jade egg.

After the cutscene, use your pearl and jade egg in the crocodile's eye sockets.

Use your cannon and missiles on the first enemies, then you will again have the option to keep fighting. If you do, use the atomic bombs first (F4) while the enemies are still tightly packed together, then switch to other weapons to finish them off.

In the temple, if you number the prayer scrolls 1-10 from the left, click on 2, 4 and 7, then take the conch. Look in the opening and take the chain, then use the chain on the point near the base of the golden spire. Now use your crowbar on the tray.

Give your conch shell to the Lama. Click on the log to get some branches, then use these on the snow to the left of the Lama. Use the leather strap on the sticks, then attach the tray, and hit it with your mallet. In the ice temple, pick up the goat skin from the right. Use your mallet on the stalactites, then put them in the ray of sun; quickly use your goat skin on the ray of sun to collect the melting water. Pour this water into the pierced bowl. Now put the power gem on the stele.

The difficulty of the first battle here depends on whether you took part in the two optional fights earlier. For the second battle, use the atomic bombs first (F4), then finish the others off with normal weapons.

Use your shaver to get the necklace, then take the charms from it. Back out and the body will disappear. Use your crowbar on the left hatch, then insert the 3 charms into the 3 hollows. Hit each of them with your mallet to reveal a control panel - do not press anything, but instead back out and go to the right opening. Put your crowbar on the ledge in front of the opened hatch to keep it open, then return to the control panel. Press all 6 buttons, then collect the 3 charms again. Go to the hatch and remove your crowbar, then insert the charms in the hollows.