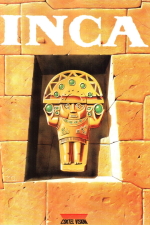 Inca is a hybrid adventure game with many action elements, designed by Coktel Vision. You play as El Dorado, a time-traveling space pilot, charged with the mission to travel to South America and recover the treasure of the Incas. The series continues with the sequel, Inca 2: Nations of Immortality.

The Jewel of Time

After the introduction, examine the pipes. Notice the symbol near the door on the left to learn some background information, then head through the door. In your spaceship, head towards the planet until you reach the asteroid field. Avoid the asteroids as much as possible, only shooting them when you absolutely need to.

In the trenches, make sure you accelerate to full speed and stay there as much as possible. When enemy fighters get close, let them overtake you and then quickly kill their mines and their ships. Survive the run and get to the end of the trench first to continue.

Press the left and right angular stones at the bottom of the doorway. Open the cover on your spaceship. Now press the right control key twice, the left control key once, and take the 3 colored balls. Click on the hole in the ground several times until the pattern on the golden sun matches the expected pattern of the hole in the floor. Now pick up the sun and place it in the hole. Put your red ball in the left melting pot, your green ball in the middle pot, and the blue ball in the right pot. Take the sacred tumi, then head through the door.

In the maze, carefully shoot the enemies and their bullets, making your way forward, left, right and forward until you are blocked by a bamboo pole. Use your tumi to loosen the left knot and then the right knot. Now use the tumi on the bamboo, and take the bamboo pieces and gold coin. Continue forward to the next room. Press the central stone and place the pieces of bamboo on the 2 notches. Touch the golden star, which will turn into golden corn over a basin. Use your tumi on the basin, then take the golden corn. Put your gold coin into the stamp in the wall, then continue forward again several times.

In the next large room, turn left and open the golden panel. Take the three-part star and close the panel again. Turn left and open the second column you see using the star. Pick up the Quipu inside and take note of the number of knots (if it isn't here, try the other columns until you find it). Press on the hook, then take the stone star. Return to the golden panel. Open it and put your new stone star inside, then place your golden corn on the golden ball that is revealed. To solve this puzzle, click on the arrows according to the information from the mummy and the knots on the Quipu:

You will now find yourself in front of 2 statues. Press the floor panel to make an altar appear. Touch the left statue and a red or blue ball will appear (remember which color). Touch the right statue immediately and another ball will join the first to form an egg. Touch the left statue until the other colored ball appears (different from the first) and touch the right statue to form a second egg. Now touch the vase to find the Jewel of Time.

The Jewel of Matter

Head towards the base straight ahead, and survive a fight against 5 red enemy spaceships. Continue to the base to receive information on your next mission, then head back outside again. Now you must survive a battle against 2 consecutive waves of enemy spaceships, first red and then blue.

Chase Aguirre around the ship, shooting at him and his bullets, until you have a longer conversation and end up chained in the hold. Remove the label and cork from the barrel, then put the powder on the label, and collect the petard. Pick up the cork and throw it at the rat. Now put the petard on the ground in front of the hole in the barrel. Replace the cork in the hole. Pull the chain twice to reveal a beam of light, then move the golden cup into the beam of light.

Search the barrels on the right to find some gold nuggets and a key, then close the barrel cover. Head through the doorway and search the barrels here to get precious stones and a key, then close the barrel cover. Open the cupboard on the left with your large key, taking the hatchet and toiletry bag from inside. Close the cupboard door and return to the previous room. Place the toiletry bag on the ground near the small barrel, then use the hatchet on the barrel to open it. Use your cup on the barrel twice to fill the bag with powder.

Open the two cupboards in here with your two keys. Take the hatchet and toiletry bag from one of them, and note the plank in the other one. Close the cupboard door and return to the room you were chained in. Put the toiletry bag on the ground near the small barrel. Open the barrel with the hatchet and remove the cover, then fill the toiletry bag with powder using the cup twice. Go to the other room and put your toiletry bag of powder on the plank in the cupboard. Take the cannon sponge. Return to the other room and use this on the barrel to move it. Climb down the trapdoor.

Now make your way through the ship, shooting at the enemies and their bullets, until you find a door you cannot open, adorned with 2 gold rings. Knock on the doors 3 times, then take the candelabra and crucifix, and replace them with the precious stones and gold nuggets.

Use your crucifix on the shell and take a censer, then put this on the pedestal, along with the candelabra. Take a candle from the candelabra and put it into the censer to summon St Peter. Now fill your cup with holy water from the shell and give it to St Peter. Take the large key and use it to unlock the door. Now click on 4 parts of the cross: top, bottom, left and then right.

After a cutscene, you are back in the trenches again. If you are successful, the Accla woman will reward you with the Jewel of Matter.

The Jewel of Energy

Head towards the base straight ahead, and survive a fight against 5 green enemy spaceships. Continue to the base to receive information on your next mission, then head back outside again. Now you must survive a battle against more spaceships and then 3 galleons.

At the first door, press each of the 3 suns, then pick up the 3 sacred eggs. Now you need to go through the following 3 steps:

Now pick up the golden disc and use it on each of the 3 suns on the left. Head through the doorway into another maze. This one is very similar to the first one back in the Inca City. You will eventually reach a barrier of vertical bars blocking a staircase. Turn right and head down some steps. Open the golden panel in the next room and rotate the mechanism. Return to the bars and they will lower so that you can head upstairs.

The next obstacle will be a room filled with lava. Take all 5 tumi blades from the wall. Now start sliding the quarry rocks to the sides, starting from the bottom, until the top rock can slide to the far left and reveal a beam of light. Use the 5 tumi blades and the sun disc on the floor at the beam of light to reflect it. Pick up the blue crystal, then pick up the sun disc again, and put the blue crystal in its place. You now have to play a game of memory; watch the large crystal for a color sequence, then click on the colors at the bottom, but make sure you click on the opposite color (see below):

Get this right 3 times in a row, then go through the doorway that appears. Continue through the maze until you find a piece of bamboo to the left of a door. Take this, then go through to the dial room. The goal of the puzzle in here is to remove all of the moons except one, and that should be at the bottom position. One correct sequence is as follows:

Now click on the Earth symbol in the middle of the dial until the moon reaches the top position. Put your golden disc in the sun slot, then take the Jewel of Energy.

Remove the golden disc, then continue through the maze until you reach the gem room.

In the final showdown, you will face another battle with Aguirre and his warriors. Defeat him to complete the game.