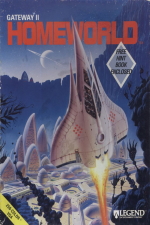 Gateway 2: Homeworld is the second of two text-based adventures with graphical elements based on the Heechee universe series of books by Frederick Pohl. It was developed by Legend Entertainment. This game follows on from the previous game in the series, Gateway. You play as an explorer who lands on "The Artifact", a spaceship just outside the orbit of Pluto, and must investigate its origins and its ties to the Heechee.

Take the trash, then head southwest and take the fax and matchbox. Read the fax. Go northeast and wait for the game to start.

Light the trash, then go southeast, south, open the door and go east. You will be taken to a military compound. Once you have control again, take all. Wear the mask, then examine the radio and turn the dial to 2. Read the paper, then go east and pull the cable. Take the fork. Head north, then wait for a tram to arrive. Enter the tram and look at the screen, then wait until you reach your destination. Leave the tram again and go south. Search the specialist, then take and read the badge. Look at the console and enter the code A552. Look at all the information available on the Aquila mission, then execute the ship systems check and initiate the auto launch, with the authentication code AERIE.

Go north and turn the radio dial to 1. Wait until the tram arrives, then board it and look at the screen. Wait twice, then pull the pin. Drop the grenade, and head south, south and west. Continue west and look at the screen. View all available options. Take the blue sensor and the yellow sensor. Attach the yellow sensor to the blue pipe. Look at the lever, then pull it. Head west, then south into the probe ship. Close the door, then go north and west. Sit down and wait until take off.

Walk east, then open the cabinet and get all. Press the button, then go out to the north and press the blue button. Go north twice more, then up. Examine the woman, and put the autodoc on her. Look at the readout, then at the blue and green dials. Turn the green dial to 5 (max) and the blue dial to 4 (antivenom). Flip the switch and inject the woman. Now set the blue dial to 3 (antibiotic) and inject the woman again. Wait until she talks to you, then set the blue dial to 5 (tissue regeneration) and inject her one last time. Talk to her about everything. Open the box and grab everything, then go down and east twice. Open the panel, then put the cube in the matrix. Look at the screen. Talk to each person in turn by pressing the buttons along the button of the screen - select all conversation items with each person. You will end up getting a lot of info, including a 5-digit code that you will write on a piece of paper. Go west twice then northeast twice. Look at the keypad and enter the 5-digit code. Put the rod in the sphere, then go through to the north.

Get the ooze in your bowl. Go north and take a twig, then go back south. Go north again and wait, then head northeast through the gap. Climb the tree and take the fruit. Throw it at the dinosaurs. Get more fruit and throw it, then repeat a third time. Wait, then look at the lizard and wait again. Head northwest and try to take an egg. Put the ooze on the plant, then take an egg. Go west and give the egg to the lizard, then take the rod. Go back to the west and insert the rod in the sphere, then go north.

Go north 2 times and examine the obelisk. Put the rod in the sphere and go north twice. Get some mud, then take and wear the skin. Go northwest and take the branch, then walk southeast, northeast, north and northeast. Take the thong, then go north. Try to go north past the chief and he will show you a red sphere. Show him your rod, then throw the vial in the fire. When it is your turn to kill a tiger, set the blue dial to 6 and tie the hypo to the spear. Throw the spear at the tiger. Walk southeast then northeast and put the branch in the fire. Head north then northwest twice and put the rod in the portal. Go north.

Head southeast, then south 6 times and east twice. Take the cube. Now head west twice, north 6 times, northwest, northeast and north. Read the paper, and note the "ape men zoo" symbols. Look at the console, then press the small buttons to display those symbols, then press the big button.

Take all, then wait for the creature to come and go. Follow it to the east, north, east and south, then back north again. Examine the child, then go east and try to take the dust. Go west and southeast, then take all before going south. Show the gem, then the cutter, then the bowl to the kord. Head north, northwest, south, then show the lamprey and gem to the kord. Walk north, west, north twice, east twice, and north 8 times. Cut the kord and take it, then head south and west 3 times. Throw the kord on the monster. Take the water with your bowl, then wait until the kords have come and gone.

Walk west, south, west, south and west. Pour the water and go in the direction it indicates. Repeat this until you reach the crater middle. Climb the ladder and examine the symbols (note the number), then look at the keypad and enter the number from the symbols. Open the hatch, take the pod and open the panel. Press the blue button, then take the corrded clamp and drop it. Put the clean clamp on the corroded one. Sit on the clean clamp and press the red button. Now walk northwest, north twice, east twice and north 3 times. Cut the ice, then wait until the kord comes and collects the dust. Head north twice more, then put the pod in the impression.

Go east and take the remote, then look at it. Press the door button, then right 3 times, door again, left, up 3 times and the square in the top left corner. Now go east and press the handprint. Look at the remote again and press the activate button, then the top left square. Go west and examine the machine, then go west and north before hitting the fork. Go up and look at the remote again, pressing down 3 times then right. Look at the size of the line on the display in the bottom right, then select a color according to the size:

Open the cabinet and take all, then look at the screen. Walk south, west and south, then wait 3 times. Open your pouch and put the powder in the thermos. Drop the pouch and wait for the Heechee to fall asleep and the light to green. Go west and give your speech. Now go north, east, north back to your room. Look at the screen again. Go south, east twice and south twice. Try to take some dirt, then grab the seeds. Go north twice and read the sign, then head east when the Place of Seeing opens. Wait for the telescope to become active, then look at it. Press each of the buttons, noting the shape of the Aesthemis constellation. Wait for the doors to open, then exit to the west. Go southwest and listen to the speaker for a while untl you hear the second verse, then go northwest and west. Wait until 2:59, then go northeast and wait to meet Macropterous. Walk southwest, east 3 times, north and in. Sit and press the destination without a label, then the big button.

Head out of your ship, then go north and turn the stone disks. Select the bottom left twice, then upper right twice, bottom right 3 times and upper left 3 times. Talk to the Heechee to learn of the 3 components you need to collect. Go out, then south and in. Sit and go to the new destination. Got out, then north and plant the seeds. Press the button and take all. Go south, then in and sit. Write down the code for the Temple Site, then go to the Administration Planet. Go out and wear the badge, then head north and look at the console. Enter the code for the Temple Site, then press the big button. Go south, in and sit. Go to the City Hangar, then go out again.

Walk south, south, east, north. Put the generator in the sludge and press the button, then go north twice. Wear the pod, then jump down and take the lens. Open the pod and put the lens inside, then drop the pouch and go up 4 times and south twice. Press the button and grab the generator, then head south, west, north twice and in. Sit down and go to the Temple Site. Head out and look at the scrape marks, then go north and down. Talk to the Heechee again (who will reveal himself as Convergence and tell you to contact Raphide. Go up and south, then in and sit down, returning to the City Hangar.

Go out, south, west 3 times and south. Wait for the light to turn green and go west. Go north, east and north, then look at the screen. Talk to Raphide and agree to kill Astatine in exchange for his information. Go south and west twice. Press the buttons to highlight the Aesthemis constellation pattern (top row 1, second row 4, third row 2, fourth row 1 and 3, fifth row 5). Wear the visor and try to take the device. Talk to Astatine, asking about the equipment and getting him to start it. Write down the code you are given, then look at the keypad and enter it. Wait 5 times, then take the device. Take the visor, and touch the screen. Say you want to end his pain, that you were sent by Raphide, and that he should disengage his datastore. Take the datastore, then head east, east, north. Look at the screen and agree to help Raphide. Head south, east twice, north, in and sit down. Go to the Temple Site.

Go out, then north and down. Agree to help Convergence, then go up, south, in and sit again. Go to the Administration Planet. Head out, then east and southeast. Wear your visor and press the stud. Go east, then wear the prototype and go east again. Remove the visor and wait for the shield to be removed. Take the coil and attack the case with it. Wait for the case to be removed. Look at the index, and type "traitor", noting the number you are given. Head east and look at the keypad, entering the number. Wait for the robot to return with your fan. Connect the datafan to the port and press download. Look at the data indicator, then put the datafan in the chute. Now go west and press the stud, then continue west, northwest, west, in and sit down. Go to the Temple Site. Head out, north and down.