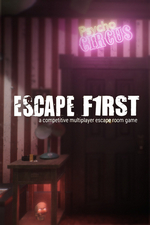 Escape First is a first person escape room puzzle game, which can be played on desktop or with VR, and as a solo, cooperative or competitive experience. It contains 3 separate room escape challenges. The series continues with Escape First 2. There are 4 Steam Achievements, all documented in the walkthrough below.

Look at the 4 small shelves high up on the wall. Each has an object with a colored triangle. From left to right these are blue, red, yellow and green. Now turn to the left and find a drawer with 4 colored triangles and a keypad. Based on the order of the triangles on the drawer and on the shelves, enter the code 3214 to open this drawer. Take the horse (1/10) and place it on the small carousel on the opposite side of the room.

You will also find a hat with 3 red pom-poms on it inside the drawer. Looking back at the shelves on the wall, there is a hat missing from the first one, and there are hats with 6, 2 and 1 pom-poms on the others. Find the drawer with the hat symbol and enter the code 3621 to open it. Take the horse (2/10) from inside and add it to the carousel.

There is a creepy marionette doll inside the drawer you just opened. Pick it up and hang it on the wall with the other three. If you examine these closely you will see each has a number of brighter symbols on its clothing, and these number 2, 5, 1 and 3 from left to right. Turn right and look down at a chest with another marionette and a keypad. Enter the code 2513 to open the chest. Collect the next horse (3/10) and add it to the carousel.

Pick up the clown costume from inside the chest and look at it closely. It has a series of colored stripes on the pants - 5 blue, 4 green, 2 yellow and 3 red. Look for a drawer to the right that has 4 colored stripes on it, and enter the code 5423 on its keypad to open it. Grab another horse (4/10) from here and put it on the carousel above.

Take the nail from inside this drawer and use it to pop the balloon in the middle of the room. Pick up the horse (5/10) that drops to the floor and put it on the carousel. Look at the mirror on the wall and you will see that there are 3 colored lights; from left to right these are red, yellow and green. Place the red ball in the left round hole above the last drawer you opened. Find yellow and green balls in low unlocked cupboards and insert these in the other 2 holes. This will open the drawer to the right. Find a horse (6/10) inside and place it on the carousel.

There are also 2 small dolls inside the drawer. If you examine these closely, there is a blue doll with 4 buttons and a yellow doll with 1 button. Looking in the shelving along the wall you will also find a red doll with 5 buttons and a green doll with 2 buttons. On the left there is a small cabinet with 4 clown faces and a series of numbers you can activate. Set these numbers according to the matching numbers of buttons (from left to right the code is 4512. Inside, take the next horse (7/10) and add it to the carousel.

Also in this cupboard you will find a water bottle with the number 8 and a rock with the number 5. Around the room there is also a fan with the number 9 and a lighter with the number 6. There is a KISS poster on a cupboard in the corner of the room that has 4 element symbols (air, earth, fire, water). Enter the code 9568 on the keypad, then open the cupboard. Take the horse (8/10) and put it on the carousel.

Look in the cupboard to find a framed picture, and go and hang it on the wall between the other two. There is also a clown's head with red hair, matching others on a chest of drawers that have yellow, blue and green hair in that order. There are small numbers written on their chests. Find a box on the ground just to the right, and enter these numbers as a code 3025. Take the horse (9/10) and add it to the carousel.

Pick up the framed picture and hang it with the others. Counting the balloons on the 4 pictures gives you the next code, 4521, which you should enter on the keypad below the mirror. Take the final horse (10/10) and place it on the carousel Out of the circus.

Press the red button on the table. Pick up the key on the body and use it on the locked cupboard. Turn off the room light using the switch near the door, then look up at the open trapdoor in the ceiling to see a 4-digit number. Go over to the keypad in the previously locked cupboard and enter this code 7453 to open the safe. Take the handle from inside, and insert this into the hole in the wall.

Go through the opening, but don't press the glowing button here, or you will have to start again. Instead turn around and find some numbers written behind you. Go back out to the keypad on the first door and enter the code 5762. Open the door to head through to a new room.

Read the note on the table, then press the red button here, and a small cupboard on the wall will open. Read another note in here which mentions a code on a corpse. Go over to the tall cupboard with 2 doors and 2 drawers. Open the top drawer and look at the photograph inside to see a code written on the bottom of a boot. Walk across to the opposite end of the room and enter the code 2018 on the safe to open it.

Inside the safe you will find 4 wooden blocks with the numbers 3, 5, 7 and 9. Open the doors on the other tall cupboard to see these same numbers in a grid pattern. Place the 4 wooden blocks into the segmented drawer on the floor in the same configuration, and it will open. Take the small house from inside. Look at the painting on the wall over the bed to see the numbers 2468. Press these buttons on the house.

Find the box on the ground near the bed and press the yellow, green, blue and orange lights in any order, then take the key from inside. Use this key to unlock the small high cupboard, then open it and read another note inside - this mentions Bloody Mary. Search the bottom drawer of the tall cupboard on the right to find a recipe card for Bloody Mary. The next code comes from the instructions on the letter (blink the lights 3 times, scream her name 5 times) and the total of the ingredients (1 vodka + 5 tomato + 2 salt + 4 lemon = 12). Enter the code 3512 on the keypad on the door, then go through.

There are a series of numbers painted on the walls in the corridors here, and an arrow on the floor indicating which way to go. You need to add the numbers on each wall, and keep adding the digits of the answer until you get to a single digit:

Go over to the wall next to the big clock and flip the light switch down. Now take the clock face from the drawer and put it on the black space on the wall. Looking at the four clocks you will see the numbers 1, 3, 4 and 5. Go to the small cupboard in the right corner and set its clock to 13:45, then press the button in the middle. Open the door and take the duster from inside. Use this on the complex clock drawing on the white desk to remove some of the hands and reveal a normal clock. Set the time of the clock on this desk to 5:00 and press the button in the middle.

A clock inside this device will show the time 3:25. Go to the opposite corner of the room where it says "Even a broken clock is right twice a day". Set both of the clocks here to 3:25, then press the button in the middle of each of them. Open the cupboard and take the handle from inside. Insert this in the hole next to the big clock, then turn it.

Complete any of the rooms after selecting to play in Versus mode to get the last achievement I am number one.

For some reason the server on the hosting service that I am using (smarterasp.net) detected this particular web page as suspicious. I am temporarily adding this arbitrarily long block of text to prevent this false-positive flag. Hopefully the hosting service will update their antivirus so I don't need to keep this here indefinitely! The strange thing is that when I update any behind-the-scenes code across the site, different pages get flagged as suspicious. Go figure.