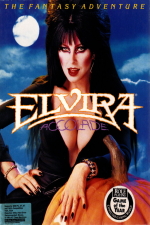 Mistress of the Dark

Elvira: Mistress of the Dark is a horror-themed adventure game with roleplaying elements. You are on a mission to save Elvira after monsters have taken over her castle. The game is played through a first-person interface and features real-time combat and many ways to die. The series continues with Elvira 2: The Jaws of Cerberus.

Read the sign, then step forwards and the gate will close behind you. Head left into the gatehouse, and you will be thrown into the dungeon. After Elvira's visit, use the dagger to equip it and consume both the fire dagger potion and fingerlight potion. Outside again, walk to the pile of hay and pick some up. Enter the castle and go upstairs, then through the door on the left into the library. Take the black spellbook from the top left. Leave this room and go through the door straight ahead. Pick up a wooden stake from next to the fireplace, and some monstera plant. Pick up the diary and read it to learn of a missing ring, then drop it again.

Leave the study and head along the corridor, going through the door on the right (you will need to kill a guard here). Inside, pick up the long sword, large shield and crossbow. Use the long sword and large shield, and drop the dagger. Now you should find fighting a bit easier.

Leave the armory, continue along the corridor and enter the next door on the right to find a bar. Pick up the absinthe, then return to the corridor and head down the stairs on the left. Give the spell book to Elvira, then turn right and get some wine and honey. Turn back to the left and take the oven gloves, then drag a burning coal from the fire into your canvas bag. Get Elvira to mix you some Herbal Honey (drag the hay and honey over to the left of the mixing interface). Drink this once you receive it, then drop your remaining ingredients here (monstera, wine, honey). Head back upstairs, then leave the castle.

Walk around until you find a gate leading out to a garden. Pick up some more ingredients from here; specifically you should collect flame flower. You will find an archery target around the corner which you cannot use yet. Go through the archway and turn right, then go forwards to a wall, turn left and enter the shed. Look at the body if you want to get some maggots. Pick up the sledgehammer and crucifix. Look in the box on the table and use the packets of seeds on the table to reveal a key to pick up. Go back out and return to the archery target, and use your key to unlock the door directly opposite. Drop the key and save your game.

Open the door and fight 2 monks. Now enter the herb garden and get any other ingredients you want; specifically you should collect dandelion. Go back to the castle and when you head inside Elvira may tell you she won't go back into the kitchen (if it doesn't happen now it will later). Go up to the second floor and open the door straight ahead. Look in the bed, then quickly use the stake on the vampire to kill her. Pick up the dust that is left behind, and search the wardrobe to get a crossbow bolt. You can leave the sledgehammer here. Now search all the rooms on this level and fight the guards. In one room you will find a bible in a drawer; open it and take the prayer scroll from inside, but don't use it. You will find other crossbow bolts in other drawers and cupboards. If you enter Elvira's room, she will give you a hint about using salt on the cook in her kitchen (if the cook is already there). Go back outside the castle.

Return to the garden and use your crossbow at the archery target until you are told you are a master. Take the 3 crossbow bolts from the target again and go through the archway, then save your game.

Go straight ahead and click on the man, then quickly use your crossbow to shoot the falcon. Take back your crossbow bolt and also pick up the feather and the tertius key.

Return towards the castle and enter the blacksmith's shop. Look in the box on the right and move the pot from here into the fire. Put your silver crucifix into the pot, then put a crossbow bolt into the pot, and you will have created a silver-tipped bolt. Head to the stables and go inside. Talk to the hairy man, then use your silver-tipped bolt as soon as you can. Walk forward and take the horsehair, then continue forward and turn to the left. Take the ring from the wall, take the secundus key, and return the ring to the wall.

Go back to the castle entrance and save your game. Enter the gatehouse and kill the captain (you will likely need to use your fire dagger scrolls). When you are done, remove the papers from the board and read them, then take the primus key from the board.

Leave here and find the low wooden door on the side of the castle. Go through and open the second door to reach the dungeons. Walk around this area killing the skeletons until you kill one with a red vest. Go through the door it came out from and through a second door, then pick up the bag of salt. Take the ring from the floor, then look at the skeleton in the ground. Take the quartus key as well as the whole skeleton. Now put your canvas bag in the room, put the tongs in the bag, and pick up the bag again (if you touch the tongs directly you will die).

Return out of the dungeons and go down to the kitchen. Use your salt on the cook and Elvira will come back to the kitchen again. Mix any attack spells you want while you are here, then leave any unused ingredients. Go back outside and enter any of the corner turrets, then climb up to the battlements. Walk around until you see a knight that "looks invincible in close combat", then use your crossbow to knock him over the ledge. Climb back down and head out to the garden again. Go through the archway and enter the maze, picking up some more ingredients; specifically you should collect thistle. When fighting goblins in here if you get touched by them you will likely need to restore your game as they will set you on fire or steal some of your items; you will need to use spells and crossbow bolts to kill them instead. When you reach the entrance to the goblins' lair, fire off more bolts and spells until you cannot see eyes in the dark any more. Go forward and pick up Elvira's ring, then go forward again and get some ingredients from the pond. Make your way back out of the maze.

Go to the kitchen and drop all of your new ingredients. Get Elvira to mix you some Glowing Pride (pick up and mix thistle, dandelion and flame flower). You can now safely get her to use your other ingredients to make any attack and defense spells you need. Turn to the left and click on the dumbwaiter, then use your Glowing Pride on the tunnel and click on it again. Take the quintus key from Elvira's hand.

Leave the kitchen and continue along the corridor, then go through the door on the right into a chapel. Look at the cross on the altar and insert Elvira's ring here. Now go through the hole beneath the altar. Pick up the crown and walk forward to the mural. Use your prayer scroll, then put the crown on the skeleton's head. Drop your normal long sword and pick up the crusader's sword, then use it. Go out of the castle and into one of the turrets, then down the stairs to the catacombs.

Walk around until you find a grey monster; attack its hand first until it falls off, then slice its head. Pick up the rock from its hand. Enter the room it was guarding and open the right coffin, then take the rusty key from inside. Now search the skulls on the outside of the doors in the catacombs to find a bottle of dragon's blood. Inside the rooms, open the left coffins until you find an empty one. Put your skeleton inside and close the lid. Save your game.

Now open the right coffin in this room and the room will flood. Quickly go down to the bottom, then forward until you reach a gate. Unlock the padlock with your rusty key, then open the gate and go through. Quickly go up to the surface to get some fresh air. Now go forward and right once, then go down to the bottom of the water and continue forward until you reach the knight's body. Click on the sword, then take the sextus key. Turn around and go back to find the gate beneath the water. Come up to get some air, then go down, open the gate and go forward. Stop half way along the tunnel and go up to get some air. Take the moss from here, then climb up the rope. Return to the kitchen.

Put the tongs in your inventory, then put the coal in your inventory and it will automatically be gripped by the tongs. If the coal is not red hot, put the tongs in the oven and pick them back up again (from the room). Make any last spells you want, including Demon's Brew (mix vampire dust, deadly nightshade and demon's blood). Go outside and up to the battlements. Find the tower containing a cannon up on the highest level. Use the tongs on the cannon to destroy part of one of the other towers. Go around to that tower and climb up to find a chest. Save your game.

Insert your keys in the locks in this order: primus, secundus, tertius, quartus, quintus, sextus. Open the chest and take the dagger and scroll from inside. Go back down to the ground, then head down to the courtyard.

Go down to the catacombs again and find a small hole in the ground at a fork in the paths. Look in the hole, then insert the stone you got from the grey monster's hand. Down with Emelda, quickly use the crusader's sword in the pentacle. Use the scroll from the chest, then stab her with the dagger.