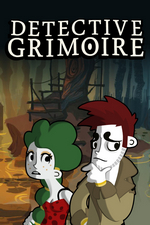 Secret of the Swamp

Detective Grimoire is a mystery third-person adventure game based on an earlier freeware online Flash game of the same name. You take the role of the titular detective, investigating crime scenes and interrogating suspects. As well as a standard adventuring interface, there are sections where you must piece together clues with word associations based on information you have previously uncovered. The series continues with the sequel, Tangle Tower. There are 9 Steam Achievements, all documented in the walkthrough below.

A Swamp Full of Secrets

Talk to Officer James, then head forward along the deck to the swamp entrance. Talk to the little girl here to receive a map. Examine the cardboard cutout and statue, then walk forward to the gate. Unlock the gate, then come up with this conclusion:

Look at the hollow in the tree and the base of the tree, then head left. Look at the flower petals on the path here, then continue forward to reach a clearing. Look at the narrow path on the left, then walk along it to find Remington's office.

Look at the swamp on the left and click on the number 3 to get the lock pick. Next look at the reeds and move them aside to find some green flippers. Examine the footprints on the ground and the red curtain in the window, then look at the chalk outline on the planks Let's Get Started. Try to head inside, then go back to the clearing.

Talk to Burle about his job and what happened last night. Next talk to Van de Peer, then come up with this conclusion:

Talk to Van de Peer about his job and what happened last night, then come to another conclusion:

Next select Van de Peer's challenge topic and say that "Remington has denied you the filming permission in the past". Drag money on to your notepad. Now present him with a clue, and select the film footage; you will get a chance to review the film footage.

Talk to Burle again, and this time select the challenge topic. Say "You left it with Van de Peer, and he used it instead", then follow it with "Van de Peer said you had a hobby on the side". You will end up seeing a photograph and getting it as a new clue. Leave the clearing and return back to the protest area.

Talk to Echo about his job and what happened last night. Look at the tent behind him and click on the padlock; you don't have the code yet. Walk back to the crossroad, then right to find the gift shop.

Talk to Sally about her job and what happened last night. Present her with a clue, and select the B&W photo, then show her Echo's profile. Now come up with this conclusion:

Look inside the gift shop, and examine all available items Boggy's Fan Club. Back out and return to the protest area. Speak to Echo and select the challenge topic. Drag the ghost on to your notepad Haunt the Swamp. Go to the gift shop again, and continue forward to the cafe. Look in the big trash can and move the trash around to find a piece of paper. Back out and come to this conclusion:

Look at the small door near the back of the ship, then the sign to the right of the cafe. Now talk to Harper about his job, then come to this conclusion:

Keep talking to Harper about what happened last night and about the Boggy costume. Present him with a profile of Echo, then select the challenge topic. Select poison, then say "The store room was broken into with a lock pick".

Go back to outside Remington's office and head inside (green key at top, blue key at bottom). Look at everything inside, including the wooden cabinet, fireplace poker, animal heads, turned over chair, torn curtain and hunting rifle.

Next look at the desk. Move the papers around so you can see Van de Peer's business card, two letters Mystery For Tomorrow, and a map on the desk. Now back out and examine the pictures over the fireplace. Solve the jigsaw puzzle, then come to this conclusion:

Look at the windows, then approach the door of the house. Solve the cog puzzle, then use the handle to get inside. Examine the book on the table, the blanket on the left and the yarn on the high shelf. Now talk to Weybridge about everything. Present her with the hunting photo. Present her with the swamp juice (match it with blueberries and yellow flowers). Repeat this with the fireplace poker and black leggings. Now you can come to this conclusion:

Return outside to the bridge then go left to the woods. Look in the water on the right and rearrange the objects to create 2 footprints. Also look in the water on the left, then talk to the girl. Follow the path down to find a museum. Examine the columns of the museum, then the bush just to the left with the blue flowers. Now approach the museum door and solve the lock puzzle to get inside.

Examine the explorer's journal and the podium upon which it rests. Look at the posters on the back wall; on one of them you get a chance to examine the title and copyright date as well (1934). Next look at the small door towards the back of the room. Now examine the shelves on the left, and arrange the sets of hands into matching pairs (you will end up taking a pair of gloves). Talk to Folder about his job and what happened last night. Come to this conclusion:

Keep talking about the Boggy costume and Richard Remington, then present him with 4 clues: Boggy hat, gloves, flippers and hunting photo. Also present him with the profile of Echo. Now select his challenge topic. Show him the lock pick, select the location of outside the office, then say "You already admitted to owning a lock pick and using it to open locked doors" followed by "You lost your lock pick in the swamp and had to buy a new one".

Return to the gift shop and talk to Sally. Select her challenge topic and say "Your black leggings were part of the murderer's costume", then "They're loose and stretched". Play with the wind-up toy she gives you.

Next you can select her challenge topic, saying "You were living in the swamp when the Explorer visited 60 years ago", "There's a page missing from the journal. I think you know where it is" and "I really have no idea. If I could see it, I might be able to make up my mind". Turn over the page you receive to see footprints on the back.

Now head back to the protest area and talk to Echo about the Boggy costume and Richard Remington. Present him next with some clues: the fireplace poker, hunting photo and explorer's journal. Also show him the profiles of Agent Folder and Harper.

The Beginning of the End

Approach the tent behind Echo and enter combination 1934. Look at the book inside Intruder Alert. Go to the crossroad and talk to the little girl again Who is that Little Girl?, then go to the museum. Talk to Folder, presenting him with the wind-up toy. You should now have 100% on all of your investigation statistics Slickest of Sleuths.

Go into your list of 9 profiles and change all 8 clues about each suspect to "Not Suspicious" except for Echo - set all 8 of his clues to "Suspicious" Due Diligence.

Go to the swamp dock and talk to Officer James, saying "I didn't find him" and "I don't need to".

Present your argument to Officer James in the following order:

Rearrange the descriptions to match the sounds:

Show Officer James the head piece. Drag the costume pieces into place on the drawing, then select the Protest area. After confronting Echo, come to this conclusion:

The Hunter and the Hunted

Watch the conclusion to the game Nice Hat.