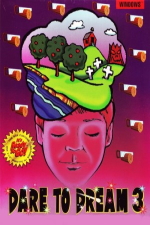 Dare to Dream 3 is the third of a series of 3 very early games from Epic MegaGames, continuing on from Dare to Dream 2. You play as Tyler E Norris, a 10-year-old boy who must go back into the world of his dreams one last time to confront his nemesis.

Take the dust (from the upper left of the wall) and a cockroach from the left pile of skulls before going through the gate. Walk west and use the key to move the newspaper. Talk to the Bloody Stump twice, then remove the dagger from it.

Head northeast and use the key on the paper again. Get the shovel from the base of the tree. Next walk southwest, east twice and north, and finally take the newspaper. Go west and south to exit the grove, then up the hill and into the schoolhouse. Get a rock from the left pile. Burn the paper in the fire and take the ashes. Head southeast, south, west and south.

Talk to the boy in the river, then drop the rock in the river. Use the dagger to cut the rope that holds him. Walk west and northwest. Pick up the bucket from the left then continue northwest. Get the gravestone, and search in the skull twice to get a shard of wood. Return to the river by going east and south twice. Fill the bucket with water. Now go west and southwest. Take the cord hanging from the tree. Now head north, northwest and into the bunker. Stick the wooden shard in the ground near the hole, tie the cord to the stake and climb down.

Walk east and talk to Enthius twice, then give him the cockroach. Go north through the secret passage and get the blank picture. Return to the schoolhouse by heading south, west, up, southeast, south, east, northeast and in. Hold the picture to the flame to develop it. Leave the house and go south, east, north, south and northeast.

Talk to the soldier, then dig a hole with your shovel. Use the hole to put the soldier in, then use the shovel to fill it in and cover it with the gravestone. Sprinkle the ashes and dust on the grave. Take the mirror that appears. Next walk southeast, south 3 times, east, northeast and northwest. Freeze the water on the blue flame. Go southwest twice, east and north into the mine.

Hold the mirror up to the eyes and climb through. Go north over the bridge. Pour the ice into the lava before proceeding north and east. Talk to Solomon and take the sickle. Walk west and south 4 times. Go northwest and cut off a leaf with the sickle. Return to Solomon (go south, into the mine, through the eyes, north twice and east). Touch Solomon with the leaf. Head west, south 4 times, west and southwest. Hold the picture up to the circle of stones, then take the crystal that appears. Go back to where Solomon was and continue east. Jump into the hole using the crystal.

Talk to Rennis twice, then show him the picture. Go northeast and look at the bunny to complete the game.