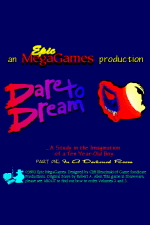 In a Darkened Room

Dare to Dream is the first of a series of 3 very early games from Epic MegaGames. This first game was originally released as shareware. You play as Tyler E Norris, a 10-year-old boy who is caught in a recurring dream. The series continues with Dare to Dream 2.

Take the balloon (piece of rubber) and the underwear, then head north, west and northeast twice to reach the boat. Examine the boat and get the fish. Now go southwest and southeast twice to Bouf's. Go inside and use the fish to open the door. Go through the door. Talk to Bouf, then take the jar of petroleum jelly and head south twice.

Walk east and use the jelly on the grate. Go down into the sewer. Go northeast. Put the underwear on the slime, then look in the barrel and get the shotgun. Go southwest and use the jelly on the grate here and slide through. Talk to Sarsippius, then head northeast, north and into the windmill. Grab a skull from the pile, before walking east, south, southwest twice and northwest out of the sewer.

Head east, and northeast twice. Use the oxygen tank on the pool of water, then go down, and north into the cave. Talk to Prince, then give him the fish - he will give you a unicorn key.

Go south three times, then southwest, south, southwest twice, northwest, west and north to Bouf's. Use the balloon on the helium tank. Head south, then use the balloon on the wall and go up to the roof. Head east and open the door, then go inside. Look at the paper on the ground, then take the cross before heading up, west and down.

Go back to the windmill (east, southeast, southwest, northeast, north and inside). Use cross in the sunshine, then go down through the portal. Head west and talk to Terry, then use the unicorn key on the gateway.