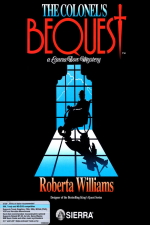 The Colonel's Bequest is a murder mystery from Sierra On-Line, and is the first game to feature protagonist Laura Bow. Time passes automatically during your explorations of the island setting, with murders and other events occurring without your involvement. You are given a ranking at the end of the game based on your performance. The next game in the series is The Dagger of Amon Ra.

Go east and ask Ethel about Rudy. Return west, then continue west and north into the bathroom. Look at Lillian twice while she is applying her perfume (so you recognise it later). Pull the armoire on the left to find a secret passage in the west wall. Look through the holes in the north painting to spy on Fifi and Henri.

Return east out of the secret passage, then pull the mirror on the right to find another. Look through the holes in the south painting to spy on Clarence and Gertie.

Return west out of the secret passage, then go south twice to be outside the mansion. From here go west 3 times and south, then enter the Carriage House. Pick up the oilcan from the bench, then look in the carriage (you will pick up a crowbar). Leave this building, and go north twice and into a chapel. Walk over towards the pulpit, then look at the floor. Pry the boards with the crowbar, then look in the hole and take the bible (you will read it and put it back).

Now head east 3 times and south to go through the back door of the mansion. Head west twice to find the study. Look at the gun on the desk. Open the cabinet on the left side of the north wall. Go east twice, south and east again into the parlor. Look at the decanter. Return west and walk over to the knight, then use your oil on the mask. Open the mask and you will take a valve and a note. Now head upstairs and through the west door into Gertie's bedroom to see she is sleeping.

Follow the men east twice, then pull the mirror and look through the holes to the north to see them talking. Go through the north door, then head east to the kitchen.

Open the icebox (you will take a soup bone). Go outside to the east from the kitchen. Give the bone to the dog, then look in the doghouse (you will take a necklace). Go back inside to the west and give the necklace to Celie. Walk west twice and pull the clock, then look through the holes to the south to spy on Clarence and Gloria.

Return east, then go south and west into the billiard room. Go outside to the west and search Gertie's body. Go inside to the east, then continue east, upstairs and east to see Rudy and Fifi. Leave to the west, then go north and west into the Colonel's room. Look in the cannon on the fireplace and take the key. Now head east, south, downstairs, north and east 3 times to be outside the kitchen. Open the basement door to see where the butler lives. Go back upstairs, then go inside to the kitchen and west 3 times to see Wilbur in the library.

Leave the room to the east, then go west and pick up the poker, then look at the feathers. Read the magazine. Now go west, south, upstairs, north and pull the left armoire. Look through the holes to the north to spy on the Colonel.

You now need to search the 4 secret passages and pick up a cane on the floor of one of them. Once you have it, go upstairs, then up the extra set of stairs on the right of the upper landing. Go through the doorway to the east to find Fifi's room and look at the decanter on the desk. Go back downstairs, then north and pull the right armoire. Look through the holes to the south.

Return west out of the secret passage, then go west twice to Wilbur's room. Look at the bag to see it is not here. Now head east twice, south, downstairs and south to be outside. Go east twice and north (to the left of the screen) to find a shack. Knock on the door, then go back outside again. Knock on the door to get inside again, and take the carrot from the table. Head outside again.

Go back outside, then head north and east to the bell tower. Climb the ladder and oil the bell, then climb back down. Stand just right of the ring beneath the bell, and pull the ring with your cane. Look at the bell and take the crank. Walk south and open the door of the doll house.

Leave the doll house and go east, in through the door, east twice, south, upstairs, upstairs again and east into Fifi's room.

Go outside to the west from the study to see Rudy.

Save your game here. You need to make it to the gazebo without running into Clarence or Ethel. Head back east inside the house, and go east 5 times to be outside the kitchen, then continue south and east to the gazebo. Search the body. Now go west twice to the statue out the front of the house, and you will see Clarence and Rudy fight.

Go north and back into the house. Continue north and east to the dining room to see Fifi and Jeeves. Next head west and north twice to find Ethel in the rose garden.

Look at the cigar, then go west, north and east to see Rudy in the dining room.

Now head west, south, upstairs and north. Pull the left armoire then look through the holes in the north painting to spy on Lillian and the Colonel.

Leave to the east, then pull the left armoire and you should smell perfume in the secret passage (if you don't, check out all the other secret passages until you do). Go downstairs and through the dining room to the kitchen, then east again to go outside. Open the door to go down into the butler's room. Look at the flowers on the bed. Go back upstairs, then inside to the west. Continue west twice, south, upstairs, north and west to the Colonel's room.

Look at the wheelchair, then go east and north and look in the garbage can. Examine the bottle with your monocle. Now head south twice, upstairs and east into Fifi's room. Search the bodies, and look at the decanter, then examine it with your monocle. Leave the room and go downstairs, then north. Pull the right armoire and look through the holes in the north painting to spy on Lillian.

Look through the holes in the south painting to spy on Clarence.

Walk west, south, downstairs and east into the parlor. Examine the glass on the bar with your monocle. Next go west, north and west twice into the study. Look in the cabinet (one of the weapons is missing). Go west out of the study to see Rudy with the dog.

Go east near the bottom of the screen, then east 3 more times and north to the left of the screen. Knock on the door to Celie's shack.

Go west, south, downstairs and south to be outside. Continue east twice and enter the hedge garden. Walk over to the stone statue and put the valve in the shaft. Turn the handle, then push the statue. Light your lantern (with the matches) before going down the steps.

Head west twice, then walk to the bottom left of the screen to find the pile of bodies. Insert your crank in the plate on the left wall and turn the crank. Go west through the doorway and west again, then up the stairs into a crypt. Pry open the vault labelled "Ruby" with your crowbar. Look in the vault and take the pouch. Return all the way back to the hedge garden, then go west 5 times and north on the left of the screen. Enter the chapel to see Celie.

Leave the chapel, then go south and open the door of the doll house to see Lillian.

Go back outside, then head east and east into the study, then continue east twice, south, upstairs, north and east to see Rudy.

Next go west, south and east, and read the notebook.

Walk west, downstairs and south. Read the note on the front door. Go east twice and into the hedge garden.

Search the body (you will take a skeleton key). Pick up the gun and the bullet. Leave the hedge maze and return west twice and in through the front door of the mansion. Go upstairs, north and west into the Colonel's room. Look in the bag, then return east, south and upstairs. Put the bullet in the gun, then unlock the attic door (with the skeleton key) and open the door. Save your game. Go through the doorway and shoot either Rudy or Henri for two alternate endings.