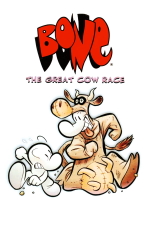 Bone 2: The Great Cow Race is the second game in a series that commenced with Bone. In this game you again control the 3 Bone cousins, saving a farm that is overrun by rats and trying to enter the titular Great Cow Race.

Just Arrived at the Barrelhaven

Mopping the Floor with Phoney

Just keep cleaning the footprints as they are created, trying to get two sets with each mop when you can, and you will eventually clean the whole floor.

Talk to Gran'ma, then walk left and click on the cart. Put all the items in the cart. Now head right and talk to Thorn until you leave.

Move your cursor over the four stone carvings to highlight parts of the dream, then over the dragon carving to see the end of the dream.

Talk to the honey man until Thorn gets annoyed and leaves. Walk north to the games area and pick up some hay from over on the right. Go back to the fair entrance and use the hay on the fire beneath the cauldron to light it. Go north again and use this on the hay cart to start it smoking. Grab some more hay and give it to Bossy the cow so she heads into the forest. Follow her to the east, and a huge bee will be smoked out of the trees. Climb up the tree on the right to get some honey.

Return west to the games area and talk to Alvie at the Cow Race game. Ask about his accent and he will let you play for free; win the game and you will get a stuffed chicken. Talk to Alvie's replacement, Benedict, who will let you play free as well. Win again and you will get a small stuffed cow. You can keep playing another 19 times to win the big one, but this is optional. Step over to the right and pick up the hammer to have a go at the other game - you will lose. Go back to the fair entrance and talk to Cecil, the soup seller. Give him back his stuffed chicken.

Go to the bar and talk to Jon until you convince him to bet on the Mystery Cow. Go right and talk to Wendell in the corner - he will give you a cowshoe that is too small for his cow Maude, and tell you that Maude is outside. Head outside and put the cowshoe in the barrel, so it gets straightened slightly. Go right and talk to Maude. Get her to "shake", then hold that pose, and you can put the cowshoe on her hoof. Head back inside and take the pepper shaker from the table on the right, then use it on the punching bag outside the right window. Talk to Wendell and convince him to bet on the Mystery Cow. Talk to Fone Bone when he arrives.

Go to the games area and Jon will tell Dirk about the Mystery Cow. While he is gone, move the lever on his game, then use the hammer and you will win a certificate of strength. Head southeast to find Thorn, and you will talk to Ted about writing a love poem. Once you see your first effort, talk to Ted again, then return to the games area. Talk to Dirk and Benedict about love poetry to get some ideas. Next go back to the fair entrance and talk to Cecil about love poetry (3 times). Return to Ted, who is waiting for you in the forest just east of the games area. Use the piece of paper next to him to create the following poem:

Take the dish towel from near the door. Put the red food dye in the boiling water, then dip the towel in it to turn it red. Tip over the coffee pot and you will be given a mop to clean up the mess. Pick up a potato from the table, then ring the bell to call Phoney over. Put a potato on the plate and ring the bell again, then quickly take Phoney's hat. Grab the key from his head, then put the hat back again. Now go to the door on the right and go outside.

Talk to Gran'ma Ben when she arrives and she will head inside for a drink.

Talk to Gran'ma Ben about absolutely everything, and Euclid will overhear most of the conversation. Go and talk to him and he will agree to bet on the Mystery Cow.

Head to the right to find the chicken coop. Unlock it with the key from Phoney's head, then open it to get some eggs. Continue east.

Outside the Old Barn

Talk to Alvie, and give him your eggs in exchange for his hat. Return west again.

Talk to the possums (under the viking helmet) and agree to play their game. Use your red towel on them to start playing, then hang it on the nearby branch - you will end up with the viking helmet. Return inside.

Use all 3 spare parts (the helmet, hat and mop) to complete the Mystery Cow costume - you will automatically be taken to the barn, but just head back outside to the back of the kitchen.

Pick up an iron bar from the barrel that has appeared here, then return to the barn.

Use the iron bar to hit the pots and pans - keeping hitting them in turn until Phoney says you have made enough noise.

Pull the left cow's tail when you see the tree with the flag approaching, and you will progress through the field. Talk to Maude next, and get her to "shake" to have her crash out too. Next pull the tail of the middle black bull, then the tail of one of the others and they will crash together. You will then jump on the back of a cow in front. You need to jump on to a cow when it starts to raise its head, as it will soon charge forward. Finally you just have to beat Gran'ma Ben. Try giving commands to Phoney, but Gran'ma Ben is listening, so agree to play the "opposites game". Give a new command and you will pass her.

After the crash, you will be chased by the rat creatures. Throw your bone at one of them, then throw pepper on another (several times). Finally wait for the final rat creature's mouth to be open and throw an egg at it.

Head all the way back to the cart, and the bee will reappear. Talk to the bee, then return its honey. Take some hay from the cart and feed it to the cow.

Go right and pick up the mallet near the baker's stall. Use this to break the lock on the soup seller's stall, then pick up the cleaver. Use this on the wooden pole holding Phoney and the cauldron.