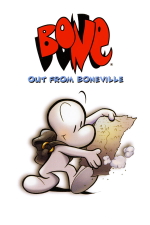 Bone: Out from Boneville

Bone: Out from Boneville is a third-person adventure by Telltale Games, based on the comic book of the same name. You control the 3 Bone cousins in a journey to get back to their home town of Boneville. The series continues with Bone 2.

Lost in the Desert

Look at the small rock next to Smiley and you will reveal a piece of paper. Talk to Smiley, who will get it for you. Talk to Phoney until he mentions the Old Grey Mare song, then get Smiley to play that song. Look in your inventory to find the dollar you have been given, and give it to Smiley in exchange for the map.

A short arcade sequence requires you to dodge or jump over rocks to avoid a huge swarm of locusts.

Head southeast and pick up one of Smiley's cigar butts. Jump over the gap to the east and pick up another one, then head northwest and jump up some rocks to a higher ledge. Pick up another butt, then go north and slide down a slope to find a fourth one. Take the path to the west and follow it to find the next butt. Continue east and north, then east out of the cave. Continue jumping over rocks to the east to reach the forest.

Walk east to the river, then talk to the bug on the grass. Ask the bug about your cousins then about Thorn. Ted will help you cross the river after you ask about it - you need to follow his pattern of two small jumps followed by one large jump.

Talk to Big Brother, but he will not be of any help yet. Go east to the apple tree, then north to find another cigar butt.

Talk to the rat creatures, and get the two of them to argue by saying one called the other fat. Now when the creatures are looking at each other step backward, and when they are looking at you stand still. Keep backing away until you jump off the cliff. You will be chased by the rats until you reach a dragon.

Talk to the dragon, who also cannot help you, then continue east and south over the rocks.

Fone and the Possums

Talk to the possums, and agree to play their game. After they hide, walk around until they say you are "hot", then select a nearby hiding spot to find them. Find all 3 possums, then get them to show you the exit. Leave near the bush over to the west.

Talk to Thorn, who is sitting near a pool, and she will eventually say her grandmother might be able to help.

Head east and talk to your stomach, then continue east until you reach Big Brother. Talk to him and ask about food, then insult him - quickly click on the large rock and Big Brother will be knocked unconscious. Cross the log and continue east to the apple tree. Pick up the fallen apple and head north.

Ignore the dragon for now, and walk over the rocks to the south.

Phoney and the Possums

Talk to Ted, who will take you to find Fone.

Talk to Gran'ma Ben and you will eventually meet up with Fone.

Agree to help Gran'ma Ben with the chores, and start by saying "Let's get that wood!". Try to take the axe from the stump, then get some help from Ted when he offers. Pick up the axe head and use it on the log, but it doesn't split it. Walk west, past Gran'ma Ben and pick up the rock, then go back and use that on the axe head. Now go west and take a corn cob from the right of the house. Walk southwest and use the well, and when Thorn talks to you, say you saw the dragon. Try putting the corn cob in the bucket, but it won't quite fit. Talk to the dragon and get him to burn the corn, then put it in the bucket. Now use the bucket to get some water from the well. Return to Gran'ma Ben and talk to her to give her the wood and water.

Head east and talk to the possums. Tell them a really boring story and they will fall asleep. Now pick up the spade, and return west to the pool area. Use the spade on the turnip mound to get a turnip.

Go east to the possums, then southeast to the dragon's area. Continue north and talk to Big Brother again. After insulting him a second time, quickly stand next to the tree and you will be launched into the air and able to grab an apple.

Keep talking until the option to "Yawn..." appears, then select it.

You now have another chase sequence like with the locusts but this time with the rat creatures. Winning this completes the game.