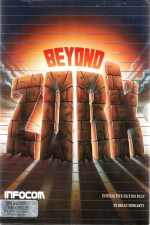 Beyond Zork is a text adventure set in the universe of the classic Zork games. It introduces minor roleplaying elements, and sees you tracking down the Ur-Grue to reclaim the stolen coconut of Quendor.

Many parts of this game are variable (location of objects, layout of mazes) so it is unlikely you will be able to play the game exactly as laid out below.

Go to the northwest and pick a weed, then go southeast, east, south. Take the lantern, then open the door and go west into the pub. Try to walk west into the kitchen and a dagger will barely miss you. Take it and wield it, then go west. Open the door (note the cook's comment) and go down into the cellar. This map area is random, so just do the following in roughly this order:

Roll the onion wherever you want to go in the lighthouse. Again, this is a random map, but the aims are as follows:

Go east to the Ledge, then northwest, and northeast to Accardi-by-the-Sea.

There is a Weapon Shop to the west - go in there to buy and sell things if you need to. Show your treasures to the woman, and then sell them to get more money. You may as well sell the dagger. Buy the best weapon you can afford. Head east out of the shop, and then east to be outside the Guild Hall. Wait here until the monkey grinder has dealt with the nymph. Give him the chest, then take it back. Go north into the Lobby and take the wand.

Head south, west, southwest, southeast, southwest, and east to the Wharf. Wait for the driftwood to appear, then pick it up and wield it (it is now called a shillelagh). Head west, south, south, and south into the Moors. Make your way through here and attack the vapor with the shillelagh (dagger won't work). If anything gets taken from you, it will be elsewhere in the moors. Head southwest out of the Moors, to the Bluffs, then west, north, north to the Stablehouse.

Kiss the unicorn's horn (increased luck), then give the chest to the unicorn (increased compassion). Take the horseshoe. Say the word of the amulet and break the stall, then enter the stall and take the saddle. Head south, then southwest. There is an armour shop here if you need it. Walk northwest, north and eat the fish cake. Continue north, and enter the Magick Shoppe (east). Show the woman all your scrolls/staves, etc. to find out what they do. Buy the rabbit's foot.

Head southwest out of the Moors, then go west twice to reach the Skyway Entrance. Make sure you have the lantern, wand of eversion and wand of levitation. Wait for the gondola to arrive, then get on when you can. As you are passing a support tower, exit the gondola and climb down. Attack the crocodile. Attack the bloodworm (masquerading as a rock). Take the tusk, and any wands, etc. Attack the baby hungus and run away from the mother. Wait after each turn, and let her chase you. Climb up the idol and when the mother climbs on to the bottom, try to take the jewel. You will fall inside the idol. Turn on your lantern, and squeeze the moss (more dexterity!). Point the eversion stick at the idol to escape, then point the eversion stick at the mother to find the jewel. Finally, point the wand of levitation at the baby (compassion).

If you want to get back to the Skyway Entrance, climb a tower and wait for the gondola to come by again. Board it as it goes past, and get off at the station.

Ethereal Plane and the Fields of Frotzen

Make sure you are carrying the vague outline (from the chest when you gave it to the monkey grinder). Read the palimpsest and say the word written on that to enter the Ethereal Plane of Atrii. Notice that your vague outline becomes a phase blade! Walk around until you are stopped by another vague outline. Cut through that with your phase blade, and walk along that path again. Wait through the conversation and try to take the coconut when asked to. After it is stolen, take the goblet that is offered, and you will be warped to the Edge of Storms. Lick the goblet for some more luck.

Make sure you have the hurdy-gurdy. Set the dial to the eye, and enter the Fields (west of the Edge of Storms). Turn the crank to the right when you reach the scarecrow that appears to be doing its job - note the color of the scarecrows' rags. Take the clover when you find it. When the butterfly appears, open the hurdy-gurdy. Wait for it to land on the goblet, then put the goblet in the hurdy-gurdy. Close it, then set the dial to clock, and turn the crank to the left. Open the hurdy-gurdy again, and take the caterpillar and goblet out. Walk around until you find the house that fell out of the sky, and go inside. Wait (do not leave) and you will get carried away in the storm.

Exit the house and look at the flowers. After a huge wait, choose the key of the same color as the successful scarecrow. You will be back in the Fields. Find a huge wall of corbies that you could not previously get through - you now can because you have something in the right color. Go through and pick a rose from the rosebush.

Exit from the Fields to the west, then go southeast, west. Make sure you still have that caterpillar, and are wearing the ring of shielding (from the dust bunny). Also take the wand of annihilation, and the dispel wand. Catch another gondola, get off at a tower, and climb down to the jungle. Exit south from the jungle to reach a Waterfall. Head southwest, then west into the Chapel. Sit on the pew and then look under the seat. Stay for a while and listen to Cardinal Toolbox if you want. Pick up your surprise, then go east, northwest. When you see the footprints in the snow, rub them out to erase the hunters' tracks. Wait until the minx is "playing at your feet", then pick it up. Now go southeast, south. Try to go west, and a silver ornament will get hurtled your way. Take it, and then show the xmas tree monsters the caterpillar.

Go west, and open the mailbox. Read the leaflet, open the parcel, and finally take the burin. Go south into the Laboratory, and take the book and hemisphere. Read the book and examinethe hemisphere. Go back north and try to go west. Kill the wight with the wand of annihilation. Pick up the snowflake (diamond!). Go west and look under the dome. Point the dispel wand at the dome. Run away from the lava, east, east, north, then go back south (making sure you are wearing that ring). Inscribe a glyph in the lava. Wait for the villagers to appear, then ask the cardinal for the reliquary. Open it, and examine the white hemisphere. Put the peg into the hole, to combine the hemispheres and form a single, grey hemisphere.

It's a long way to go, but head back to the Magick Shoppe (via the gondola). You will have to pick up the minx as you climb the tower and board the gondola, and again when you get off. About now, you should be able to sell most of your treasures and other items, and buy the best of everything - plate mail, long sword and scabbard. Head out of the shop, then northwest, and north into the forest (make sure the minx is still with you). Kill the puppet and hellhound (use the stick of annihilation if you haven't bought weapons and armour. When you locate an inscription on a boulder, read it, and answer "youth". Find an oak tree in the forest, and wait there until the minx locates a truffle. Take that back to the boulder and put it in the pool. Wade into the pool and fish it out again - it will now stay fresh until you need it. Also, to stop the minx from eating it, put it in your pack.

Make sure you have the truffle, whistle, vial, minx, hourglass and rose. Head out the north end of the forest, onto the Bridge. There is no way to walk off the bridge (the only way to get off by yourself is to open the umbrella and jump). Blow the whistle, and your flying friend will appear. Make sure this is the first time!

Climb on the pterydactyl's back and fly. Go northeast, then down to earth. If the wind is blowing an awkward direction, point the rose southwest, then try again. Get off the pterodactyl. You should now be in the ruins. Do the following:

Blow your whistle (2nd time). Get on the pterodactyl and fly. Head southwest, southwest, south, south, southwest (again using the rose if you have to). You should now be over the Castle, so land and get off. Hide behind the bush. Take some morgia roots and eat them (more strength). Wait for the platypus to come and go, then leave the bush. Open the statue and take the jar. Blow the whistle and it will evaporate into nothingness. Get on and fly, go northeast, down and get off.

Make sure you have the lucky charms (rabbit's foot, four-leaf clover horseshoe), the jar containing the circlet, and be wearing the plate mail armour. You must also have eaten the fish cake, drank the potion of enlightenment and be wearing the Pheehelm (helmet) to continue.

Look into the gray sphere to find a password for opening a door. Catch a gondola and head back to Thriff. From there, go northwest, west to the Rock Wall. Say the password to reveal a secret passage to the Underground. Open the door and go through.

Open the jar and take the circlet. Blow a bubble. Turn the mirror so that it can reflect light from the previous passage. For example, if light is entering from the southeast and you want it to go southwest, turn the mirror to face south. Explore the Underground, directing light wherever you go.Kill the lurking presences (grues) when they appear. Use your luck charms on the lucksuckers (black cat, stepladder, umbrella, etc.).

Search around until you find the Treasure Chamber. Direct light into that room and blow a bubble in the room. Turn the mirror to direct light into the corner of the chamber where the shadow is lurking. Assuming you had enough compassion (from rescuing the minx, releasing the unicorn, and rescuing the baby hungus) you will survive the ur-grue's attack. Search the treasure and take the coconut! Wait in the underground (or run if you prefer), and you will get buried. You will be rescued...