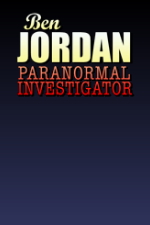 Ben Jordan Case 3: The Sorceress of Smailholm is the third in a long-running series of point-and-click adventures starring Ben Jordan, and created by Grundislav Games. This follows after Ben Jordan Case 2: The Lost Galleon of the Salton Sea. In this game, you are investigating the murder of two children in a small town in Scotland, thought to be the work of a witch. The series continues with Ben Jordan Case 4: Horror at Number 50.

Talk to Marcus (the innkeeper), Wallace (the man near the window) and Angus (the man wearing the hat) about everything, then head upstairs. Open the door to the far right and go into the bedroom, then use the bed.

Leave your bedroom and you will automatically go downstairs to talk to Percival. After he leaves, follow him out of the hotel. Go next door into the jail and talk to Mary about everything. Return outside and head right. Enter the pink McBee house on the right. Look at the portrait over the fireplace, then talk to the McBees about everything. Leave the house and go left, then through the archway.

Walk up along the path, then to the right 3 times, where you will see an old woman cast a spell near the river. Return left twice and knock on the door of the cottage. Say you saw the old woman by the river, and she will let you inside. Talk to Wilma about everything, then leave the cottage.

Outside, go left, along the path to Smailholm, and through the archway to the right. Enter the jail. Talk to Mary and she will give you a locket. Exit the jail and go right. Head right, then continue behind the far right house to reach the graveyard. Pick up the teddy bear, then return through the town and out to Wilma's cottage. Give her the teddy bear and the locket. You will automatically go to bed back at the hotel.

Leave the hotel and go out to Wilma's cottage. Look at Wilma's body and the red symbol painted on the wall. Go back outside and talk to Percival, then search the flowerbed to get a blood-stained crowbar. Go left and examine the Witch Code written on the tree. Continue left and use the crowbar on the lock on the tower door, then go inside. Look at the floorboards to notice one is lighter than the others, then use your crowbar on it. Search the hole to find an old diary. Read this in your inventory, and you will remove a partial translation of the Witch Code - look at this in your inventory as well.

Return to the town and enter the jail. Talk to Mary about everything before leaving town again. Go along the path, then go right twice (past Wilma's cottage) and up to the forest to witness a secret meeting. Return to Mary in jail again and talk to her again. Leave the jail again. Save your game. Walk out through the archway, but have your crowbar ready. As soon as the conversation is over, throw your crowbar at Constable McGee (before he shoots you). Search his body to get a key on a ring, and a tranquilizer gun. Go back to the jail and use the new key on the cell door to free Mary. You will automatically go to bed back at the hotel.

Leave the hotel and you will start a conversation with Percival. Tell the truth, then accuse the McBees, and say nobody killed them. Leave town, go along the path, then go right twice and look at another Witch Code written on the tree here. Using the partial translation in your inventory and the game manual, you can now decipher both of the messages on the trees:

Return to town and enter the hotel. Go upstairs and into the left bedroom to talk to Percival. Tell him about the Witch Code, which says "Eliminate PQJ". After he leaves, take the shovel and go outside. Head right and around to the graveyard. Use your shovel on the McBees' grave, then open the coffin.

Talk about everything, and you will escape to the forest. Pick up the stick. Use your tranquilizer gun on Zortherus, then use the stick on him.