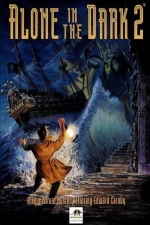 Alone in the Dark 2

Alone in the Dark 2 is the second in a long-running series of 3rd person horror adventure games with combat and survival elements. In this game you play mostly as Edward Carnby, but also as a child, Grace Saunders, exploring another haunted mansion and fighting zombie pirates. The story is continued in Alone in the Dark 3.

Kill the first guard with your bare hands, then take his thompson, clip and flask. Run down the alley to the anchor statue. Quickly push it and enter the hedge maze (if you are quick, you will avoid getting shot). Walk forward just past the first corner and then back behind it. Kill the guard that comes out, and take the photo he drops. Keep going forward and take the first right. Kill the guy down that passage, taking the clip and flask, as well as the rope. Note the diamond card. Go back to the main passage and continue to the crossroads. Another guard will appear - kill him and head to the top of the screen. Kill the guy in that passage and take the clip (this is so he doesn't attack you later on). Go back to the crossroads and head down. Kill the guy in the trenchcoat (take his book) and continue to find the hook. Kill the last guy (only if you feel like it) and step on the diamond card.

Head straight forward and kill the green guy. Take the flask to the north, then turn around and head to the south. Push the chest to raise the altar, and kill the ghost with your thompson. Take the pirate's sword, then head back outside (use the ladder where you came in).

Make your way to a 3-way intersection and turn left after killing the guard. Continue down the pathway and turn left when you can. Shoot the big fat guy, and when you reach the dangerous looking branches, kill them with the sword. Shorty Leg is around the next corner - hide behind the statue and use all your ammo to kill him (you will lose it all soon anyway!). Take the flask and use the hook. Use the hook a second time to move the statue's arm and go inside.

Take the nickel, crank and paper bag. Also take Stryker's notes and the pipe cleaner. Use the paper under the door, then the pipe cleaner, to get the key. Open the door and go inside. Walk down the corridor until you see a guy sitting down. Stand behind the barrel, next to the lever. Use the paper bag twice to get his attention, then push the lever just after he stands up. Take the book, flask and riot gun. Go behind the grandfather clock and use the crank to open a secret passage. Go through and take the book and shotgun shells. To get rid of the Musicman, just tear his pact. Take the hook, and keep going until you find the beater. Don't go upstairs yet! You should hear shooting nearby.

Stay in the doorway and shoot the first guy, then go backward and wait for the other one to come after you. After killing him, go into their room and try to align 4 diamonds to open the door (punch to rotate them twice, shoot for once). Do this while standing right next to the door, and kill the guy that appears, then take the flask and whiskey. Use the nickel in the slot machine to get two tokens, and also take the book from the back of the room. Return to the shooting gallery. Kill the slow, drunk guy (just run behind him and start punching) and take the sack. Open it and put on the costume. Now head upstairs.

Turn right and head (walk, don't run) to the kitchen. In the kitchen, take the frying pan and stand near the eggs. Get ready to fight the big chef, using the pan (because it blocks his darts). Take the wine from the stove and the poison from beside the dumbwaiter. Use the poison with the wine, then get near the door, in front of the statue, and drop the poisoned wine. Wait and see what happens. To get rid of little chef and the statue, wait for the chef to be near the statue and start running to activate the trident. Run into the kitchen and wait! Go through the door you opened with the wine and use the two tokens in the juke-box. Take the doubloon and go through the door. Take all the war stuff (bulletproof vest - use this, ammo clip and thompson). Take the crown from the statue and go upstairs.

Kill the laughing zombie (get in close and punch), then open the door and enter the hall. Open the middle door, and a derringer will get thrown your way. Take it and quickly use it. Take the sword-stick, then get the scroll and book from the bookshelf. Go back into the hall and open the nearest door. Use the sword to kill the ghostly arms, then get the other half of that scroll (use it to combine the parts). Use the crown on the white statue, then go into the magic room and take the amulet. You will now fly elsewhere.

Take the vial and note, then open the door and go immediately to the left and take the thompson and clip. Stay where you are and get ready to shoot two more guys. Take the grenade and the key, then go through the open door and use the doubloon in the jack-in-the-box. Take the pompon. Now open the closed door and go inside. To get rid of the clown, throw the pompon through the archway. Let the clown go after the pompon and use the grenade in the chimney. Now go down. The best way to kill everyone is to quickly run out of the room and way for them to come through the doorway, one by one. Take the red ball from the Christmas tree and go upstairs again in the pool room. Use the ball in the big box with the holes. Use the key in the door and go inside, then watch what happens. After the conversation, use the hook to exit. No matter what you do next, you will be captured by Elizabeth.

Push the plank so you can leave. Near the parrow, take the seeds, sandwich and pepper. Give the seeds to the parrot for a clue. Exit the room and go immediately to your left - hide in the small niche until the pirate stops walking. Go quickly to the ladder at the end of the hall and climb up. Climb up a second ladder straight away, then find your way to the open hatch without being spotted - go behind the sitting guy, to the edge of the ship, and along behind the boxes to the hatch. Take the flint & steel before going down. Take the small cannon from the chest, the vase from the shelf and the staff from near the bed. Stand in front of the door and put down the cannon. Use the pepper on the cannon, then throw the vase. When the pirate is near, use the flint & steel on the cannon. Take the bell and leave. Go through the door straight ahead, then take the chicken's foot, get near the blue plate, ring the bell and get into the dumbwaiter. Take the key and use it on the locker in the kitchen. Get the molasses and the ice box. When you try to leave, you will hear someone coming - go back into the kitchen and use the ice box in the doorway. Go upstairs and do the same thing with the molasses, then go into the pool room. Get the token, then go into the cell room. Use the staff behind the desk with the broken plate in the corner of the room, to get a key and another book. Go into the magic room and use the staff on the plate. Go back to the kitchen, next to the dumbwaiter, and ring the bell again - you will get captured.

Get the key and free yourself, then kill the pirate. Take the sword and start following Grace, killing everyone in your path. Pick up the fuse that is dropped and go through the door in front of you. Kill the two guys and get the fire-iron, pliers and key. Leave again, then go through the door next to where Grace hid earlier. Kill the guy and take the gun, ammo and flask. Push the barrel to the left and take the chainmail. Go through the door at the end of the hallway and kill the pirate. Take the ammo and flask, then unlock the locked door on that level. Don't fire your gun in this room! Use the sword to kill the swordmaster, then get the book and the gunpowder barrel. Go up to the upper deck. Find a room with a cannon, and kill the guy sleeping next to it. Free the cannon by using the pliers, then push it to the left, and drop the gunpowder barrel in the sleeping quarters (across the hall). Use the fuse on the cannon, and then use the fire-iron. Now go into the room that used to be filled with sleeping pirates. Take the flask and the gold pieces. Use this gold near the locked doors and kill the two dwarves. Enter their room and take the flask. Kill the cook behind the door, take the diamond card, and use it on the last locked door. You will be captured once again.

Use the staff on the statue, then enter the room and use the chicken's foot.

Run away from the really tough ghost, and climb the ladder to get onto the main deck. Kill everyone here, then get the hook and climb the mast. Wait for the pirate and kill him with your sword. Use the hook on the rope. Kill the next enemy, then jump down and take Nichol's sword. Free Grace with the pliers, then run to the cannons and stop the fuse. Now kill One-Eye Jack with Nichol's sword.