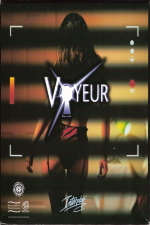 Voyeur is a FMV game where you play as a private detective, hired to investigate the family of Reed Hawke, the CEO of a powerful corporation. You control a series of cameras hidden throughout the Hawke mansion, collecting evidence of crimes. The series continues with a sequel, Voyeur 2.

After you receive the message in your apartment, watch the television to see a news report covering the main characters. Look through the camcorder to start the main section of the game. There are plenty of scenes to watch and listen to during the game, but the following are the more important segments you should try to see to complete the game. Towards the end, only some of the segments will be available (depending on what you have seen previously).

Depending on what has happened so far, someone is about to be murdered. Carefully scan all the rooms and make sure you get full footage of the murder. If instead you want to save the person, you must very quickly send them your footage when you realize who the target is.

If a murder has taken place, there will be news on the television. Phone the police when the news piece is finished. The ending you see depends on whether you managed to record the whole of the murder scene.